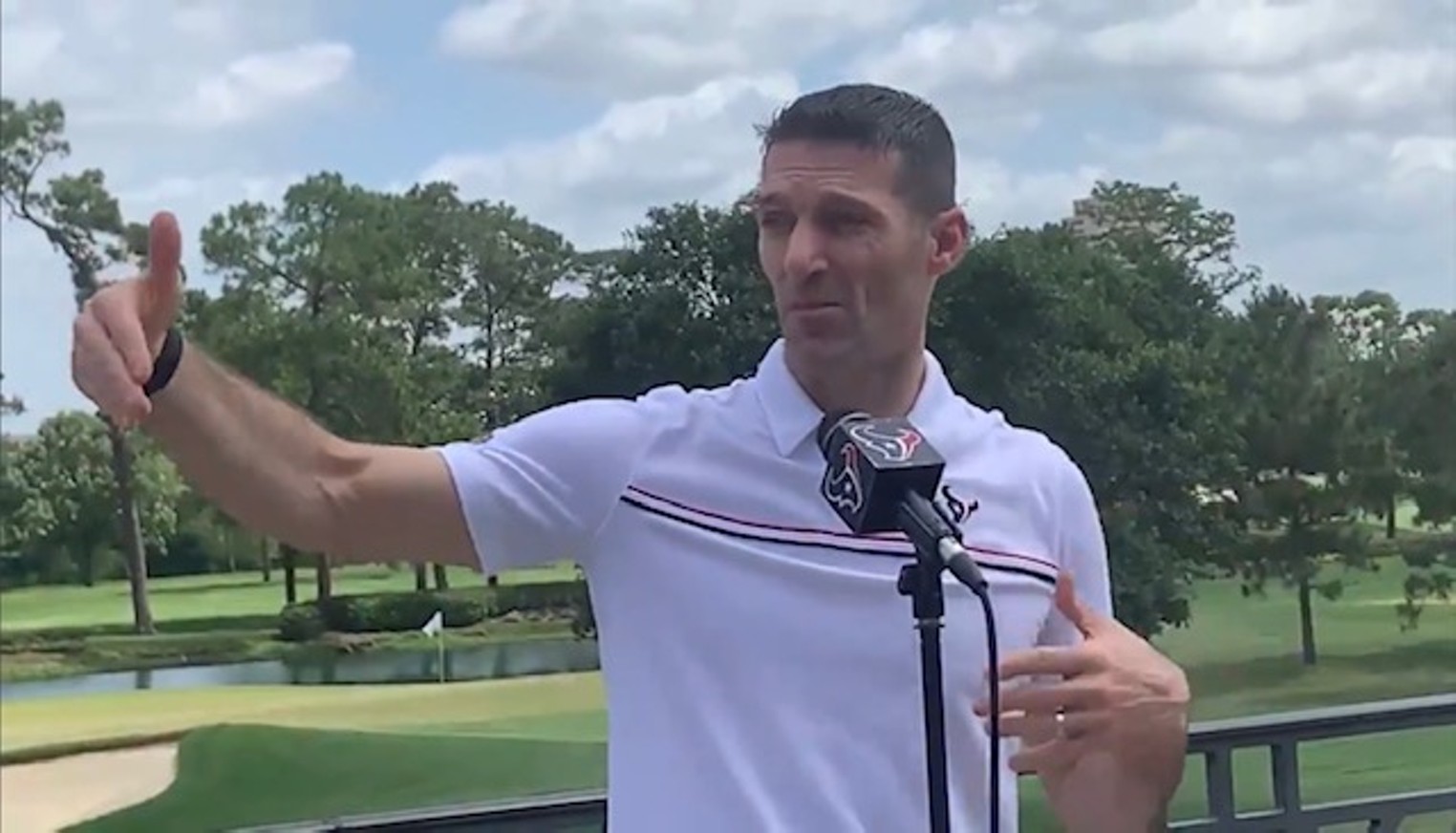 The Houston Texans had their annual charity golf tournament on Monday earlier this week. That event is always a “feel good” kind of day, largely because the team is raising literally hundreds of thousands of dollars for charity while giving the media a bonus availability post-draft and pre-minicamp. It’s normally a very positive day, sweltering heat notwithstanding.

If anything, Monday’s event had a little extra energy, simply because it feels like the Texans have partially turned some sort of corner in the public eye. They’re making sensible moves, Lovie Smith is a real head coach (not an overwhelmed puppet), and the schedule is coming out in a couple days, which even for bad teams, has a “Christmas day kind of feel.

Well, that is for everyone except general manager Nick Caserio, who has zero time (literally) for the release of the schedule this Thursday night:

Thankfully, Caserio appears to be very good at identifying talent, because he would be awful when it comes to marketing. Come on, Nick! GET EXCITED!

You want to know something else that Nick Caserio is not ready to get excited about publicly? The slew of rookies he just brought into the building via the NFL Draft. While the rest of the city is going to bed at night creaming about all of the “A-” grades the experts just gave Caserio and his staff post draft, Caserio thinks the expectations for these rookies are getting a little stupid here early on:

This was the original comment from Caserio about the expectations for the rookies being a little out of control … I was waiting for him to shoot me a death stare tbh @SportsRadio610 pic.twitter.com/Qkd6msTHxH

Damn, Nick. The schedule release is a useless night, the rookies are getting too much hype… what’s next? Toro smells?

Well, forgive me. I am going to continue to get irrationally excited over the nine man rookie class that you brought in, Nick. Hell, I may even get pumped about a few of your undrafted free agents like Notre Dame defensive lineman Kurt Hinish and Houston tight end Seth Green. In fact, I may out my money where my mouth is and bet on a few of these Texans rookies to win some hardware!

Behold, courtesy of BetOnline.ag, the odds for Offensive and Defensive Rookie of the Year in the National Football League:

This looks about right. Stingley is the headliner of the Texans’ rookie class, and thus has the shortest odds to win his respective Rookie of the Year Award at 12/1. I do think if Stingley is fully healthy, which Caserio and Lovie Smith both indicated Monday they have no concerns about, he is a sneaky good play at those odds. Of the other two Texans defensive rookies, I think Christian Harris is a fun play at 50/1. If he can find his way into the rotation early, he could be a guy that rolls up some tackle numbers.

Offensively, the Texans’ two rookie skill guys are understandably deep on the odds board, but I am confident that both Dameon Pierce and John Metchie III can be viable contributors to an improved Texans offense. If I had to pick one of the two, I would go with Pierce, because he has the better chance of garnering a bigger role in the offense, and he unlike Metchie, Pierce is not coming off an ACL injury.

Either way, I plan on remaining excited about these rookies, and excited to find out where and when they play their games this year. Sue me, Nick!