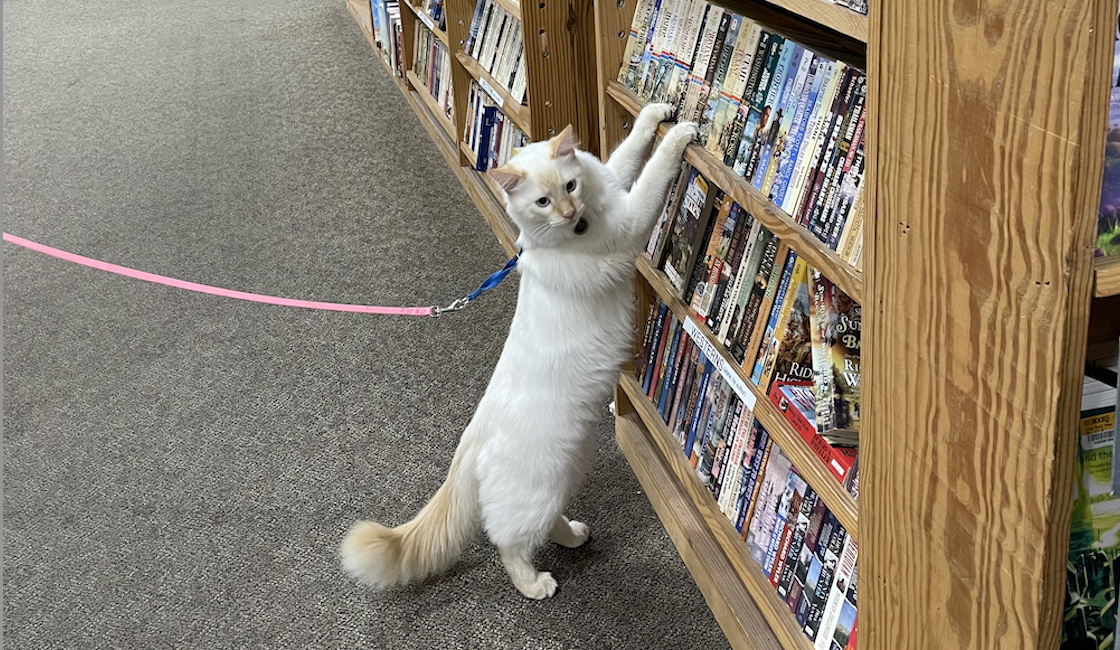 We were not more than 10 feet through the doors of the Half Price Books flagship when my son and I walked smack into a rabbit. The itty bitty gray bunny was cradled in the arm of a magician who, I’m told, is a regular and seems to relish the attention the pet attracts. The shivering rabbit looked like she would have preferred the privacy of a top hat.

That was exactly the kind of interaction I would have included in my story on Half Price Books, posted online today, had I not already turned in the manuscript and had my editor not already forced significant cuts. I spent several weeks in the flagship store and found that when it comes to the peculiar and poignant, Half Price Books is fertile ground.

Entire grafs were severed from the story. It was painful to me at the time, but you’ll never know the difference. You’ll never know about the manga fan walking a leashed cat, except that the feline is pictured above. I won’t drone on about the many dogs I saw, except to note that there are plenty to be seen since “well-behaved” canines are expressly welcome at the store.

Santa didn’t make the cut either. Unfortunate, because it still makes me giggle that even the HPB Kris Kringle is something of an oddball. Karl Ward, a classically trained actor and the store’s former donations manager once appeared on the truTV competition show Santas in the Barn as a character called Pirate Santa. In his 29 years as the store’s real-beard Santa, he has willingly posed with pet rabbits, ferrets, hedgehogs, turtles, dogs, cats, and, hairiest of all, a tarantula spider.

Also sliced: the moment I watched a pair of brothers rip through to the Buy Counter, dropping several boxes and leaving without waiting for an offer. I guess you don’t really need to know how strapping and blond they were or about the impressive angle of their jaws, a scene that made me imagine they might be environmentally conscious hitmen on the run. And you can go on living without knowing what I pieced together based on the contents of the boxes, which would have earned the men $212.

And then there was Steve Leach, the now-retired Buy Guy, who trained Half Price staff around the country and publicized the store’s rare and unusual finds. Steve has a gazillion stories of strange encounters and acquisitions. A bunch of those ended up in a winding, true adventure tale written almost two decades ago by Jeff Bowden in this magazine. I included several of Steve’s other stories—when the Austin store received never-before-seen security documents related to the Charles Whitman shooting and the time the Ohio location got Dictaphone recordings from the estate of a psychologist who examined Jack Ruby. Nevertheless, the whole Steve section was extracted for space.

It’s no wonder I struggled with the volume of material. Half Price Books celebrates 50 years this month, and just about everyone who works or shops there has a story to offer. I’m not tired of hearing them. I loved learning about customers’ routines and the treasures they had found inside the stores over the years.

If you would like to share your own Half Price Books recollections or prize finds, I invite you to leave them in the comments below. The word count limit is generous. You can find my own story right here.