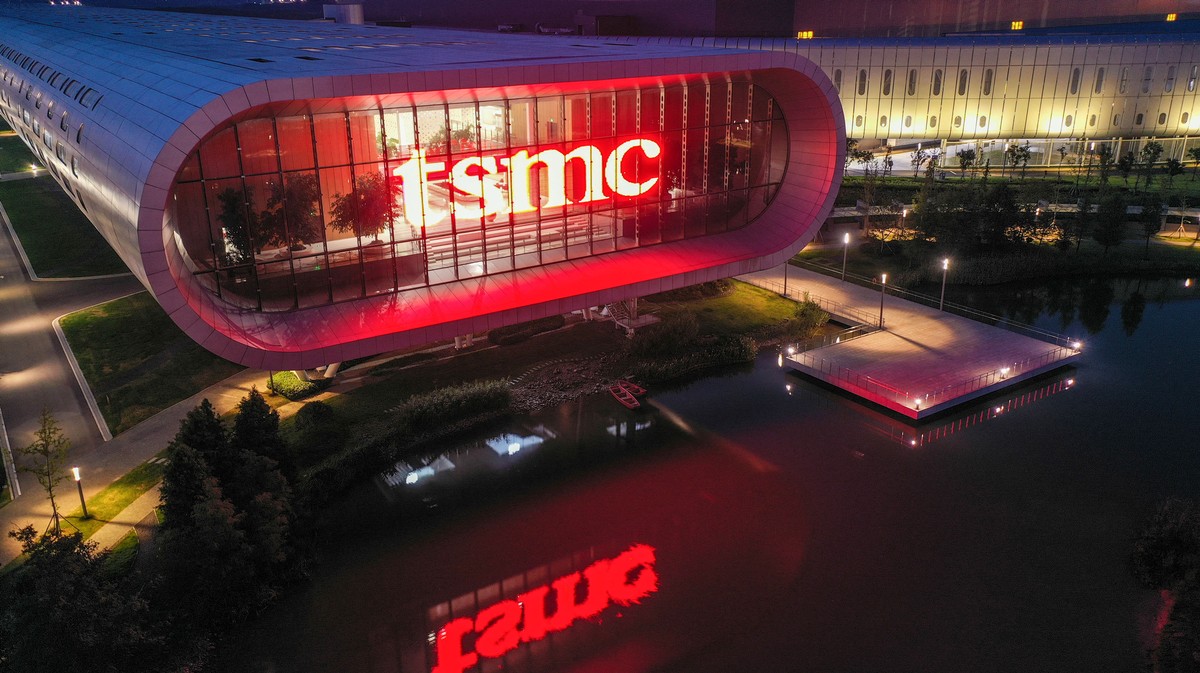 When U.S. House Speaker Nancy Pelosi visited Taiwan in early August, she vowed support for the self-ruled democracy at a time when it seemed to need it. An increasingly powerful China, which claims Taiwan as its own territory, had sought to weaken the island’s international standing, and Chinese nationalists’ calls for an invasion had grown louder. By traveling to Taipei in defiance of Beijing’s protest, Pelosi said, she wanted to demonstrate the U.S.’ commitment to help Taiwan defend its freedom.

But it quickly became clear that the unofficial U.S.-Taiwan relationship was more than just the world’s dominant power backing its weaker partner in a choice, as Pelosi herself put it, “between autocracy and democracy.”

Pelosi, the most senior U.S. official to go to Taiwan in 25 years, also made a point of dining with the leaders of the Taiwan Semiconductor Manufacturing Company, or TSMC.

The company is the world’s leading maker of chips that power everything from the latest iPhone to F-35 fighter jets, and the U.S. simply couldn’t live without them. Hot on the heels of Pelosi’s visit, two U.S. state governors have traveled to Taiwan and met with TSMC’s executives. What they did was not as much offering protection as it was kissing the ring.

The reliance of the world’s No. 1 tech power on TSMC illustrates its unmatched market dominance in making advanced semiconductors, capacities that even China counts on to support its fast-growing digital economy.

“TSMC has clearly been the global leader in a very high-end commodity: advanced chips that the world needs to help all these other industries—aerospace, autos, electronic appliances, military equipment,” Dexter Roberts, a senior fellow at the Atlantic Council, told VICE World News. “Nobody wants to see TSMC hurt.”

TSMC counts Sony and Apple among its clients and controls more than half the global market share of made-to-order chips and over 90 percent of more-advanced processors, according to industry estimates.

There is no company quite like TSMC, which pioneered the pure-play foundry model, where it exclusively produces chips designed by other companies. It is on track to produce 3-nanometer wafers for Apple’s newest MacBook Pro, which makes it faster and more energy-efficient, and is expected to launch ultra-advanced 2nm chips by 2025.

“Their success relies on focusing just on one thing and doing it to perfection,” said Patrick Chen, head of Taiwan research at CLSA, the brokerage.

The firm is in a league of its own thanks to sustained investment as well as the talents and technical expertise it has accumulated since it was founded in 1987.

Roberts noted that most of its rivals have chosen to move upstream or outsource their manufacturing to TSMC to avoid direct competition. “It’s very difficult for anybody to keep up with TSMC in what they’re doing,” he said.

Likewise, TSMC avoids designing or making any semiconductor products under its own name to ensure it never competes with its customers. In a statement to VICE World News, the company did not directly answer questions on the political risks it faces but called itself an “open platform” available to everyone.

This business model has allowed TSMC to corner the market, which in turn spared it from being forced to pick a side in the intensifying superpower rivalry. “There’s no arm-twisting going on,” Roberts said.

The U.S., which accounts for nearly 65 percent of TSMC’s sales, has long considered its dependency on TSMC unsafe. To buffer against the uncertainty, Washington has convinced the company to build a new $12 billion manufacturing plant in Arizona, which is expected to churn out 5nm wafers by 2024.

On Wednesday, Arizona’s governor, Doug Ducey, visited Taiwan in hopes of wooing suppliers for the facilities in his state. Last week, Indiana Gov. Eric Holcomb also went to Taiwan to promote academic and technological ties between the democratic island and the U.S. state.

But most of TSMC’s operations are still concentrated in its sprawling facilities near Taipei, where Pelosi rubbed shoulders with its executives. They discussed the newly passed CHIPS and Science Act, which offers $52 billion in subsidies for new chip manufacturing plants on American soil. TSMC is also expected to get a piece of the pie.

China, on the other hand, is still playing catch-up and can’t afford to alienate TSMC either. While it is responsible for only 10 percent of TSMC’s sales, it relies on the company to provide 70 percent of the wafers it needs for its consumer electronics industry. To break its dependency and replicate TSMC’s success, Beijing has poured tens of billions of dollars into its domestic chipmaking industry, launched cyberattacks to steal TSMC’s intellectual property, and poached its executives and engineers—only to find itself far short of its goal.

Analysts estimate that China is at least four to five years behind TSMC in terms of the most advanced chip it could mass-produce.

China’s leading chipmaker, Semiconductor Manufacturing International Corporation, for instance, made a surprise leap with a recent tech breakthrough, despite U.S. sanctions that limit its access to critical raw materials and equipment. It is reportedly able to make 7nm chips, but that’s still two generations behind the 3nm wafers TSMC is set to produce in volume this month.

“The idea of creating a 100 percent self-reliant semiconductor industry is fundamentally unrealistic because it’s the most globalized industry in the world,” Jordan Schneider, a technology analyst at the consulting firm Rhodium Group, told VICE World News.

Companies have developed such specialized know-how and manufacturing capabilities that only a handful of firms around the world could fill the void in particular parts of the semiconductor supply chain—a technological frontier China cannot recreate simply by throwing money at it.

For the same reason, it is unlikely China could seize the prized foundries for itself through an attack on Taiwan.

“Nobody can control TSMC by force,” TSMC chairman Mark Liu explained in a recent interview with CNN, noting that an invasion would render the sophisticated manufacturing facility “inoperable” as it depends on real-time connection with the rest of the world, including the U.S., Europe and Japan. “From materials, to chemicals, to spare parts, to engineering software diagnoses—it’s everybody’s effort to make this factory operable,” Liu said.

China would shoot itself in the foot if it invades Taiwan ostensibly for the chips, Schneider said. “Its entire economy would be forced back to 1990s levels of microelectronics because the fallout from such an action would lead you to be cut off from the rest of the global semiconductor ecosystem.”

TSMC and its chip industry has given Taiwan such political and economic leverage that it has been dubbed by some as a silicon shield.

Liu, the chairman, acknowledged that it’s “not a bad thing” that China needs the company. “Our interruption would cause great economic turmoil in China, because suddenly their most advanced components have disappeared, so people will think twice about this,” he said.

But as Beijing, stressing the historical mission of reunification, bears down on Taiwan, there are growing fears of a day when TSMC’s supremacy would not be sufficient to deter China. That would spell trouble not just for the company and the island but also for the rest of the world, which relies on its chips to function.

“The constant backdrop is the very ugly, scary possibility that there could be military hostilities in the Taiwan Strait,” Roberts said. “Then all bets are off. Economic concerns may temporarily be off the table and it may be about whose side are you on.”

TSMC going dark would deal a critical blow to the global economy, an impact more severe than the COVID-19 pandemic. Imagine Apple unable to launch its latest iPhone and Amazon losing its web services. “Maintaining the daily operation of the business world would become an impossible task,” CLSA’s Chen said.

That is a scenario no one wants to see. “Frankly, they’re in a pretty good spot,” Schneider said. “So long as we don’t have World War III.”