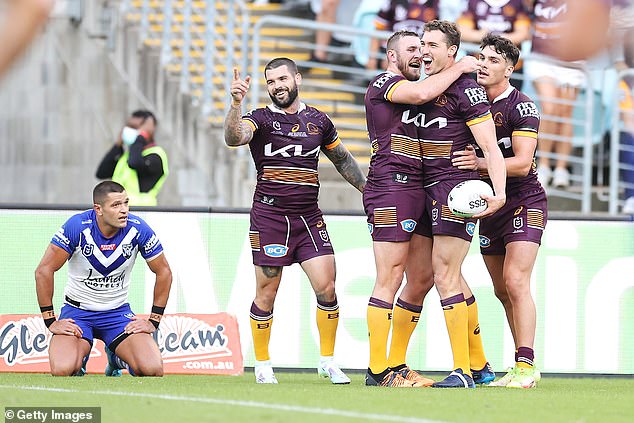 The Brisbane Broncos survived a final Canterbury onslaught to run out winners 16-10 at Sydney’s Accor Stadium, giving them back-to-back victories to start their 2022 NRL season.

They defended their line grimly in the final minutes and then a Josh Addo-Carr burst down the eastern touchline nearly brought the third try the Bulldogs were so desperately seeking.

But a 12-9 error count by the home side didn’t help matters when they tried to grab the ascendancy earlier.

The match was locked up twice, proving the arm wrestle it turned out to be.

The Broncos last started a NRL season with two straight wins in 2020 – but they ended up with the wooden spoon that year.

However it’s a different coach now with Kevin Walters, and a new halfback in Adam Reynolds who steered his side around what used to be his old home ground with the South Sydney Rabbitohs.

So maybe 2022 will have a much happier ending.

Tevita Pangai Junior wasted no time in reacquainting himself with his old teammates.

But he overstepped the mark with a late tackle on Reynolds in just the second minute with referee Ziggy Przeklasa-Adamski placing him on report.

It was the first game in new colours for both Pangai Junior (hamstring) and Reynolds (COVID-19) as both players had separate health issues last weekend.

Scores were locked up 4-4 at halftime, signifying the closeness of these two early in both attack and defence, despite a healthy 60 per cent possession to the Bulldogs.

The home side was the first to score off an error by Broncos fullback Testi Niu in the 10th minute.

He dropped a Matt Burton bomb cold, with the Bulldogs centre Braidon Burns scoring in the right corner in the next set.

Points came early in the second half when hooker Jeremy Marshall-King slipped through three Broncos defenders to score from dummy-half.

But the Bulldogs replied quickly through a one-on-one strip by Herbie Farnworth and with the Reynolds conversion – his first points in a Broncos jumper – the game was locked up again 10-10.

A no-look Reynolds pass through his legs to Katoni Staggs six minutes later was worth four points, but the Broncos centre lost his grip on the ball over the line.

The deadlock was broken when Farnworth scored his second (16-10) despite the Bulldogs claiming an obstruction by Oates.

The Bulldogs kept pressing but the error count kept rising.

They had two repeat sets on the Broncos line in the final four minutes and couldn’t get the breakthrough.