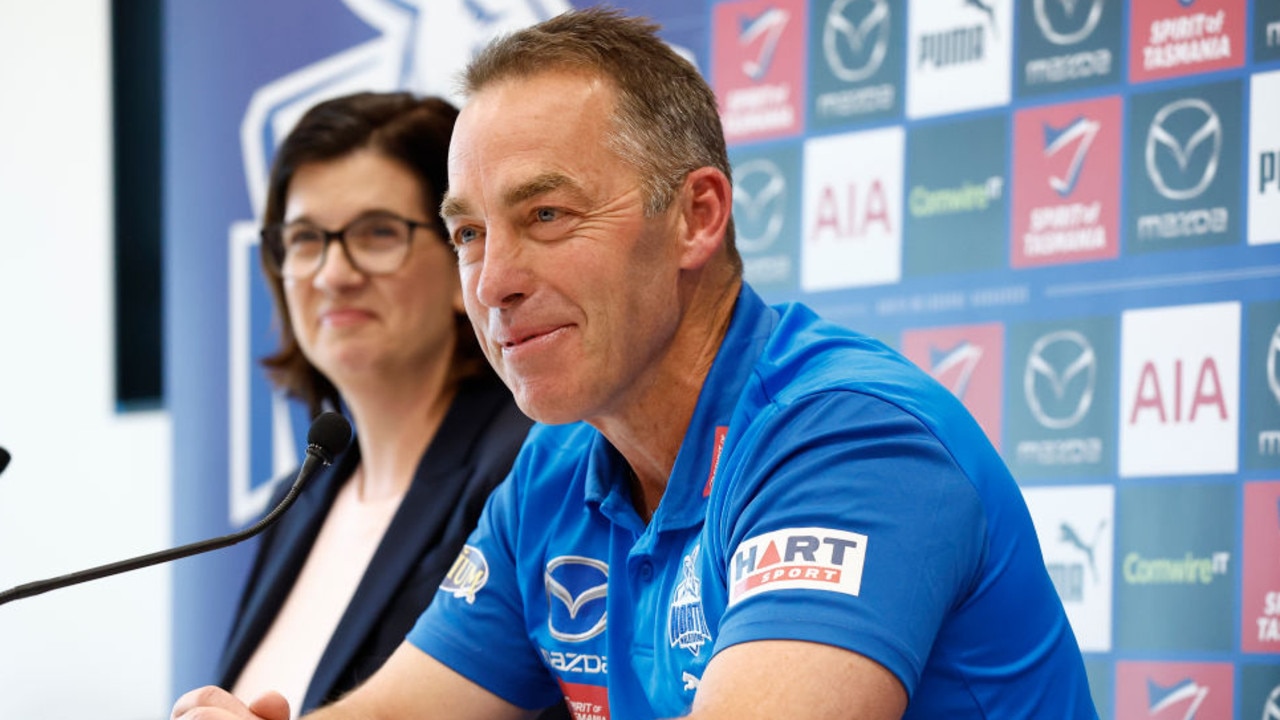 The Kangaroos on Friday morning confirmed the super coach would join the club on a five-year deal, putting an end to week-long speculation around his much-anticipated decision.

Speaking to media later in the afternoon, Clarkson said the approach from Essendon came “far too late” to seriously consider and that he didn’t want to have “ongoing discussions” with the club.

‘Does he want to?’ Bombers boss responds to Hird link after shock twist

“There was sentiment with Essendon, and I‘ve got enormous respect for GWS, but this just felt right. I feel comfortable here. It was a difficult position to be in, and I was aware it was becoming a circus. I don’t like being the centre of attention,” he told reporters.

“We were so far down the road with North and GWS, the Essendon process came far too late to give it serious consideration.

“It was really out of respect that I listened to what they had to say. Due diligence takes a lot longer than four days, for me.

“It really disappoints me what’s unfolded with ‘Truck’ (Ben Rutten) out at the Bombers, he’s a good man and good football person. I hope somehow that can be resurrected as a result of the decision today.”

Clarkson described it as an “exciting time to be involved” at Arden Street as he looks to help turn around its fortunes after a two-win season that saw David Noble get sacked last month.

“As we’ve seen with Carlton and Collingwood it doesn’t take much to turn it around,” he said.

“Get the right people in, the right vision and everyone marching to the same tune, and you can pick things up pretty quickly.

“We know we have a lot of work to do … I‘m really excited with that challenge, but it’s going to take a lot of hard work.

“We’ve got a group of guys who’ve been through a tough year. But I feel like there’s real optimism of where we can go over the next few years.

“I’m not of the view that it’s going to be a 10-year turnaround, I’m of the view that if you roll the sleeves up and get to work and put together a program with really good people who are aligned to a vision of where we want to go, then we can all get on this journey together.”

The 54-year old said the club will explore draft, trade and free agency mechanisms to improve its list, but that “by and large we‘ll get better with the people we have” as he prepares to officially take over the reins at North on November 1.

Clarkson opened up on how he really “fell in love with the game” during his first visit to Melbourne in 1977 to watch the Roos’ draw with Collingwood in that year’s grand final.

But it was several years later when North supported him during a tough period of his life where he lost his brother in a car accident in 1984 as he now hopes to repay the favour.

“(Key Roos figures at the time) were so pivotal to me at that stage of my life because I was going through a really, really tough time,” he said.

“It could easily have gone one way or the other, and I was so fortune I had those people.

“Perhaps the shoe is on the other foot right now where this club needs some support and some help, and that was pivotal in us making the decision to help the club get back on track again.”

It comes amid a year out of the game for the mastermind after his departure from Hawthorn, which he coached in 390 games from from 2005-2021 including four premierships during a golden era to widely earn the reputation as the greatest coach of the modern era.

He explained how his time in the US in 2022 to focus on professional development including at NBA powerhouse Golden State Warriors helped fuel the fire in is belly to return to coaching.

“I spent a a lot of time with the Golden State Warriors and (their coach) Steve Kerr … they were planning a big playoff series against Denver — and they had the MVP (Nikola Jokic) in their side — and their was this enormous strategy around how they were going to defeat Denver and negate the influence of this significant player for them,” he explained.

“Watching that discussion unfold into training sessions where they needed to go and practice and execute it, then a best-of seven game series … I came back from there so inspired by what Steve was doing and their success. I thought to myself, ‘this is what I do, this is in my DNA’.”

Earlier on Friday, president Sonja Hood described the coup as a “real watershed moment for our club” in a letter to members.

“Our former number 23, Shinboner #781, and four-time premiership coach will lead our talented, young group from 2023 until at least 2027.

“This is a real watershed moment for our club. I am writing to share it with members and supporters first … this is a moment for all of us.

“Today is a good day. Alastair’s coming home. To our home.”

Hood praised Clarkson and his manager James Henderson for how the handled the delicate negotiations.

“I can’t speak highly enough of the professionalism of Alastair and his manager James Henderson over this past four weeks. We’ve had a crash course in getting to know each other and Alastair’s passion to drive our club back to where we belong is incredibly infectious,” she wrote.