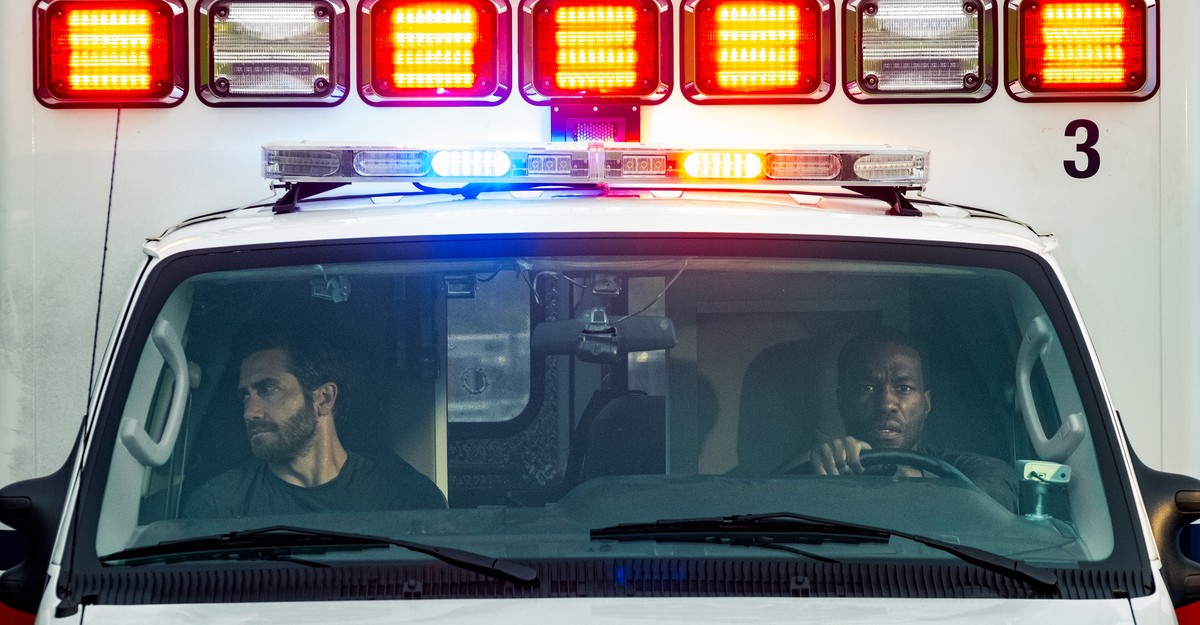 Ambulance is an action movie with a simple hook, the kind of “high concept” story pitch that one can just imagine a Hollywood executive’s eyes lighting up at. Two bank robbers, the adoptive brothers Danny (played by Jake Gyllenhaal) and Will Sharp (Yahya Abdul-Mateen II), hijack an ambulance after a heist gone wrong, using it to sneak by the cops. Only inside the vehicle are the flinty EMT Cam Thompson (Eiza González) and her critically injured patient, one of the policemen shot during the robbery. A white-knuckle citywide car chase ensues, with the brothers trying to stay one step ahead of capture as they tool across Los Angeles with their involuntary guests in tow.

Straightforward stuff—except Ambulance has been put in the hands of Michael Bay, the most grandiose practitioner of big-screen mayhem in recent film history. He takes basic dialogue scenes and shoots them from 40 frenetic angles, cramming the background with fireballs and gunfire. To Bay, an establishing shot of a street should be taken by a drone camera that’s spinning 360 degrees while rocketing into the air; if he’s filming an auto accident and it involves only two vehicles, I assume he considers it an abject failure. He has also never met a plot that he couldn’t overstuff, and Ambulance is a flaming turducken of an action epic, filled with tense standoffs with gangland warlords, an emergency splenectomy, and a Christopher Cross sing-along to fatten the running time.

As such, if you’re buying a ticket hoping for a honed piece of cinema, you may be disappointed. Ambulance is instead a strong entry in Bay’s maximalist canon, his best assault on the senses since his underrated 2013 comic thriller, Pain & Gain. Much like with that film, Bay seems to have intended Ambulance as a departure from his usual blockbuster scale; he took on the project as something to do while in pandemic limbo with a bigger movie. But though its $40 million budget is small by his standards, this is hardly an intimate character drama, unless one’s idea of intimacy includes being yelled at for two hours and 15 minutes.

In Gyllenhaal, Bay has found a perfect avatar for his kinetic style. Gyllenhaal is certainly capable of producing subtle, rich work on-screen, but if a director tells him to go off the leash (think Okja or Nightcrawler), he’s always happy to do so. His performance as the keyed-up master criminal Danny consistently looks like he chugged a can of Four Loko seconds before the camera started rolling. The audience is assured that Danny is a top-class criminal, the type of bank robber who makes FBI experts shudder when they hear his name. Yet his response to the robbery unraveling is to similarly fall apart. He barks ridiculous orders and waves a machine gun around in a futile effort to escape scot-free with millions of dollars.

His brother, Will, a military veteran desperate for money to pay for experimental surgery for his ailing wife, is a slightly calmer presence—though nobody in a Michael Bay movie is ever really capable of total serenity. While Danny’s in it for the greed and the thrills, Will just wants to get home, lending some genuine tension to their debates on how to best dodge the cops (Danny, of course, suggests instigating more and more chaos as a distraction). Alongside them in the ambulance is Cam, who is primarily concerned with keeping her patient alive but becomes an uneasy ally to Will over time; she tries to both plot her escape and curb Danny’s frenzied tendencies.

Ambulance would be best served by confining most of the story to that interpersonal conflict, then staging a few bravura action sequences around it, the formula established by hits such as Speed (still maybe the best vehicular adventure Hollywood’s ever produced). But Bay rarely hits the brakes, so the film instead feels like one overlong string of stunts that won’t let up. I was undoubtedly fixed to my seat—if nothing else, Danny’s irrational machinations were unpredictable—but I felt more than a little pummeled by the end, which comes only after every character has been given the chance to shout themselves hoarse and fire each round out of every available magazine.

Still, given that Bay has spent most of his recent career stuck in toyland (by which I mean directing five Transformers movies), failing to make a splash with a Netflix experiment (the anonymous-feeling Six Underground), I’m glad to see him back in the genre he understands best: the cable thriller. Ambulance is ready-made fodder for TV reruns and channel surfers, just like his other trash masterworks, The Rock and Armageddon. Even so, if you’re looking for a berserk but invigorating cinema trip, it’s worth taking in the full experience in the loudest, brassiest environment possible.