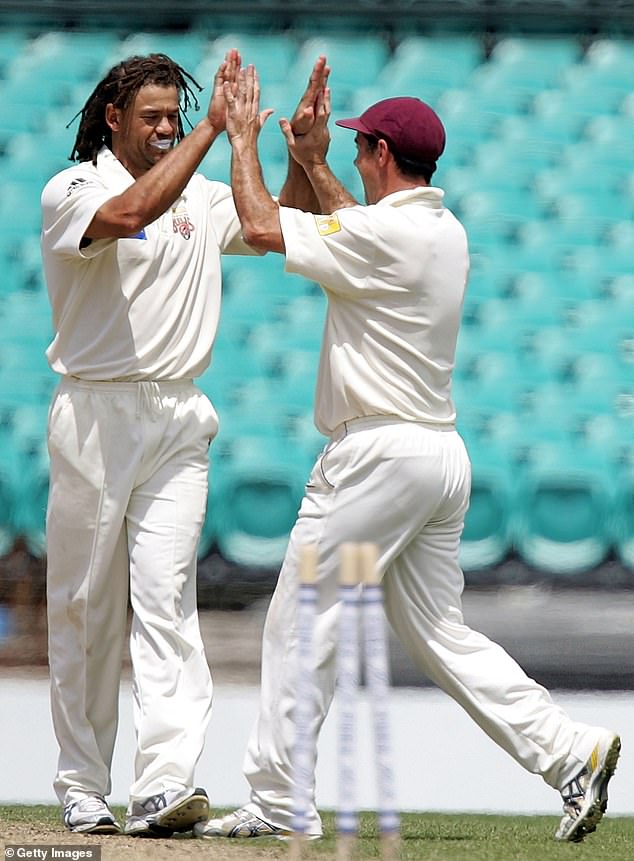 One of Andrew Symonds’ best mates has fought back tears while paying a heartbreaking tribute to his former Queensland and Australian teammate.

The cricket world is still reeling from the shock death of the legendary all-rounder, 46, killed when his car veered off the road and rolled down an embankment near Townsville in Queensland’s north on Saturday night.

Few people knew Symonds better than long-time good mate and former teammate Jimmy Maher. The pair first began playing cricket together in the under-10s in the nearby town of Charters Towers.

Maher struggled to maintain his composure as he paid an emotional tribute on Tuesday morning.

‘Far away from the cricket field, the things we shared are things I’ll miss, family stuff and all those things.

‘Alright mate, I’m going to leave it there. Stay tough mate, you’re doing a wonderful thing by the family Jimmy,’ he told Maher.

Maher admitted the last few days had been tough. He has travelled to Townsville to rally behind Symonds’ shattered family, including wife Laura and their two young children.

‘I know one thing if he was still with us, we’d be well and truly out on the boat by now as it’s cracking weather up here this morning and he loved his fishing,’ he said.

‘Getting up here and getting off the plane, you’re used to him being in the car and saying ‘Mahbo, you’re five minutes late’ and I’d say ‘mate, I didn’t fly the plane.

‘That’s the sort of bloke he was and it really hit home yesterday and walking through the door to know he wasn’t going to be there.’

Andrew Symonds (right) leaves behind a shattered family. Also pictured are his wife Laura (left) and their youngest child Billy

Maher added Symonds’ family are ‘hanging in there’.

‘They’re holding up the best they can, they really need their privacy to be respected,’ he said.

One of his fondest memories of the pair’s 30-year friendship was being part of Australia’s victorious 2003 World Cup squad.

‘Our cricket careers ran parallel to each other through all those years and we ended up playing so many games together for Queensland and then Australia,’ Maher recalled.

‘Our proudest moment was that 2003 World Cup win, having come that far together, since eight-year-olds from the bush.

‘We were great mates and to share that experience was incredible and I’ll certainly miss it.’

Jimmy Maher (left) and Andrew Symonds (right) shared many highs and lows together, including Queensland’s loss in the 2005 Pura Cup final

This morning Australian legend Allan Border also remembered Symonds as a real character who was full of life and would have been good at any sport he chosen to pursue.

‘He was keen on his rugby league but at cricket, he was just a natural,’ he said.

‘He had all the skills and was fantastic in the field. You could call on him to do anything.

‘He did it always with a smile on his face and at 100 per cent. He was great to have around the dressing room and a wonderful person to have in your cricket team.’

There are growing calls for a Best Team Player award to be named in Symonds’ honour.

Maher said Symonds’ family are holding up the best they. Symonds (right) is pictured with wife Laura and their children Chloe and Billy