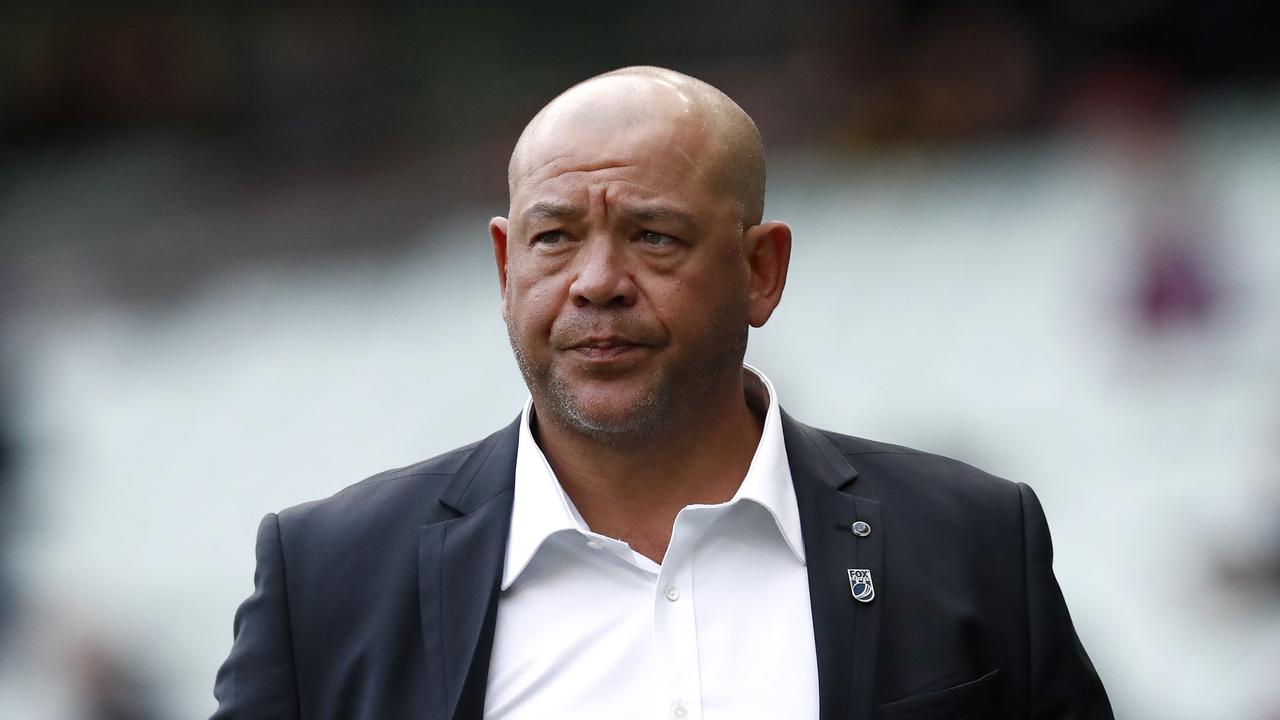 In another tragic blow to Australian cricket, Andrew Symonds has died in a car accident, aged 46.

The former Australian all-rounder was killed about 50kms outside Townsville on Saturday night.

A Queensland police statement says Symonds was in a single-car crash about 10.30pm.

Symonds was driving on Hervey Range Road near the Alice River Bridge when his car left the road and rolled, police say.

Paramedics arrived at the scene but couldn’t revive the former Australian fan favourite, who was the only person in the car.

TRIBUTE: Symonds was a larrikin cut from different cloth. Aussie cricket wouldn’t be the same without him

REACTION: ‘The definition of fearless’: Tributes pour in as Australia mourns shock death of Symonds

‘TOOK LAW INTO OWN HANDS’: The streaker moment that summed up an Aussie legend

A couple arrived at the scene two minutes after the incident and called 000, where Symonds’ two blue heeler dogs remained by his side.

“One of them was very sensitive and didn’t want to leave him,” Babetha Neliman told The Courier-Mail.

“It would just growl at you every time we tried to move him or go near him.”

“Think of your most loyal, fun, loving friend who would do anything for you. That’s Roy,” Gilchrist tweeted.

“We are all gonna miss you mate.”

“Simmo once said to me, “If you can’t say it in 3 words Joe it’s not worth listening to”. Well Roy……’Bloody good bloke’ sums you up. Make sure those XXXX bitters cans are nice and cold #Albert for when next we sip #brokenheart #riproy #queenslander #fishing #mates #cricket,” he said.

Ricky Ponting added: “If Roy shook your hand you had his word, that’s the sort of bloke he was and that’s why I always wanted him on my team. An extraordinary player and even better human being. Can’t believe he’s gone. Thoughts are with his family at this time.”

“I can’t quite believe it. Another tragic day for cricket. Bad things do happen in threes,” he said.

Taylor added: “He was just an entertainer. In an era where professionalism really is a throw away word that we use probably too often. Symo was the older sort of guy.

“He wanted to go out there and have fun and play the game he remembered to play it as a kid.

“At times he got in trouble for not going to training or maybe having a few too many beers at life but that is the way he lived his life and the way he wanted to play his cricket also.”

Symonds is the third Australian cricket legend to suddenly pass away this year following the tragic deaths of Shane Warne and Rod Marsh in March.

Symonds played 26 Tests for Australia, and was an integral part of Australia’s white ball sides that dominated the world between 1999 and 2007.

He won ODI World Cups in 2003 and 2007, with the former tournament including a stunning, breakout 143 not out against Pakistan that set-up the rest of his career.

Cricket Australia chair Lachlan Henderson said in a statement that Symonds was a “generational talent” and an “instrumental” part in Australia’s World Cup success.

“He was a cult figure to many who was treasured by his fans and friends,” he said.

“On behalf of Australian cricket our deepest sympathies are with Andrew’s family, team-mates, and friends.”

CA chief Nick Hockley added: “He was a prodigious talent from an early age in Queensland with his clean ball-striking ability, shrewd spin bowling and brilliant fielding.

“He will be sadly missed by the Australian cricket community and particularly his very close friends at the Queensland Bulls where he was a popular and much-admired team-mate and friend.

“Our thoughts are with his family and friends at this devastatingly sad time.”

He was once pigeonholed as a white ball player, but eventually broke into Australia’s Test team in 2004, going on to average 40.61 with the bat and score two centuries.

Symonds’ last post on Instagram came after the death of Warne, when he wrote: “Devastated, I’m hoping this is all a bad dream.

“I just can’t get my head around never seeing you again.”

He was famously a keen fisherman — he once missed a compulsory team meeting in 2008 to go fishing — and would often be found out on a boat when not commentating for Fox Cricket.

Symonds is survived by wife Laura and young children Chloe and Billy.

“We are still in shock – I’m just thinking of the two kids,” Laura told the Courier Mail.

“He was such a big person and there is just so much of him in his kids.’’