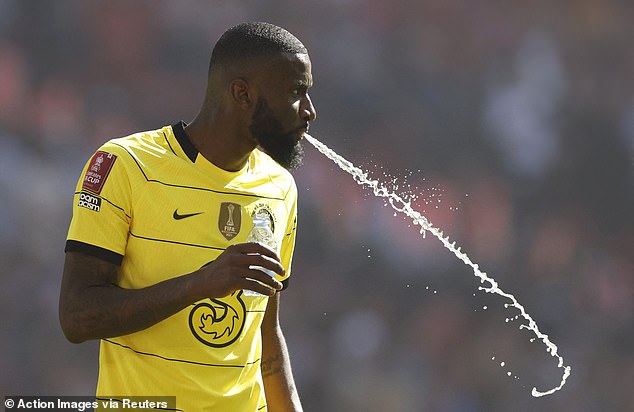 Antonio Rudiger has denied rumours suggesting he’s leaving Chelsea due to the sanctions placed on the club.

The 29-year-old defender is out of contract this summer and has signed a four-year deal with Real Madrid, where he will earn £315,000-per-week.

Reports had suggested Rudiger is bringing his five-year stay in west London to an end due to sanctions imposed on the Blues which bans them from negotiating contracts with existing players.

But the Germany international has insisted the sanctions were not the issue. Following the FA Cup final loss to Liverpool, he said: ‘There was a chance but sanctions are not the problem. I don’t want to go too deep in things.

‘As always, I am very, very thankful me, my family. I became a man here. My kids were born here and everything. London and especially Chelsea will always be special to me.’

‘It’s been five years as normal with ups and downs, but with a lot of positive things.

‘That’s why I’m even more frustrated because I wanted to have a different ending.’

Rudiger is gutted to be leaving Chelsea without one last winner’s medal after Liverpool made Thomas Tuchel’s side pay on penalties in another cup final.

Having lost February’s Carabao Cup showpiece to Jurgen Klopp’s Reds on spot-kicks following an engaging, scoreless battle, history repeated itself as the sides met back at Wembley vying for FA Cup glory.

Neither side could find the breakthrough across 120 minutes, with Alisson Becker denying Mason Mount before Kostas Tsimikas fired home to seal Liverpool a 6-5 sudden-death shoot-out triumph.

It was Chelsea’s third FA Cup final loss in as many years and compounded February’s Carabao Cup frustrations for Rudiger.

‘I think it was a good game like the Carabao Cup final,’ the centre-back said.

‘It’s about today, it’s not about next season. The game was about today and it was there to take and, yeah, unfortunately we didn’t.’