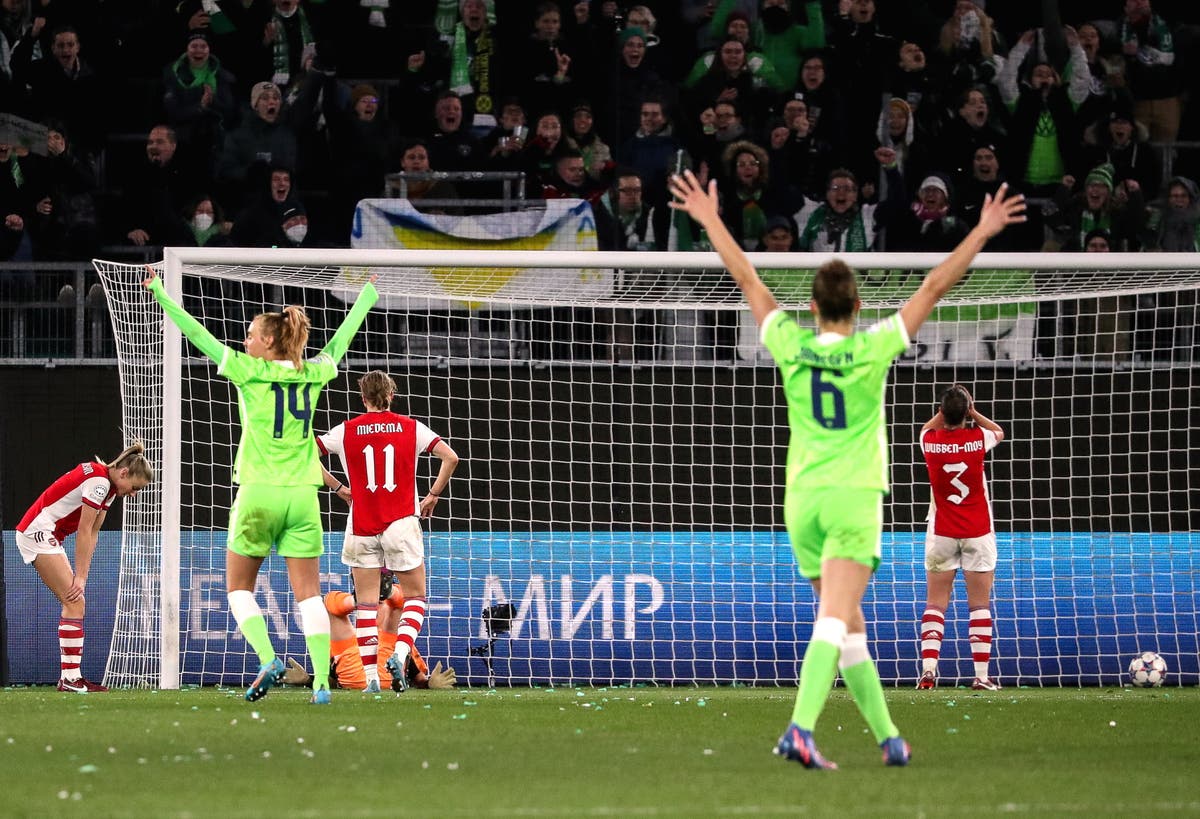 Arsenal exited the Women’s Champions League at the quarter-final stage as Wolfsburg impressively beat them 2-0 at the Volkswagen Arena to secure a 3-1 aggregate triumph.

A closely-fought first leg had seen Tabea Wassmuth give the Frauen-Bundesliga side the lead at the Emirates Stadium before Lotte Wubben-Moy’s late equaliser earned Arsenal a draw to leave them well in the hunt for a first Champions League semi-final appearance since 2013.

That year, it was Wolfsburg who had ended their run – also at the Volkswagen Arena where they triumphed 2-1 in the second leg to reach the final – and history ultimately repeated itself, much to the chagrin of the English side

Former Gunner Jill Roord scored the opener after just nine minutes when the visitors were undone yet again by a set-piece – something that has become an Achilles heel for them this term.

Arsenal failed to deal with a corner that came swerving into the box, Sveindis Jonsdottir turned it towards goal and after the ball came loose in the six-yard box, Roord reacted quickest to flick it past Manuela Zinsberger from close range.

Wolfsburg were dominant as Jonsdottir fired over from the edge of the area and another cross almost sailed in but was tipped over by Zinsberger, who also saved well with her legs when Svenja Huth burst through.

The hosts did have the ball in the net for a second time when Wassmuth neatly controlled and finished in the area but after a long check by VAR, it was ruled out for offside.

Arsenal improved after the break but failed to create anything clear cut, instead seeing the tie taken away from them thanks to a fortuitous second goal on 72 minutes. Jonsdottir got to the byline and her low cross deflected off Leah Williamson’s leg, slipping under Zinsberger and dribbling across the line.

A 2-0 deficit woke the Gunners up as Vivianne Miedema’s towering header struck the crossbar, before Williamson’s follow-up shot was brilliantly tipped onto the post by Wolfsburg goalkeeper Almuth Schult.

The Germans then saw the game out expertly and set up a tantalising semi-final against holders Barcelona, who progressed to the semi-finals on Wednesday following an 8-3 aggregate win over rivals Real Madrid, with the second leg at the Nou Camp played in front of a crowd of 91,553.

Arsenal’s attention will now turn back to the Women’s Super League, where they find themselves in a scintillating title battle with Chelsea – trailing the table-topping Blues by just a single point with five games left in the campaign.