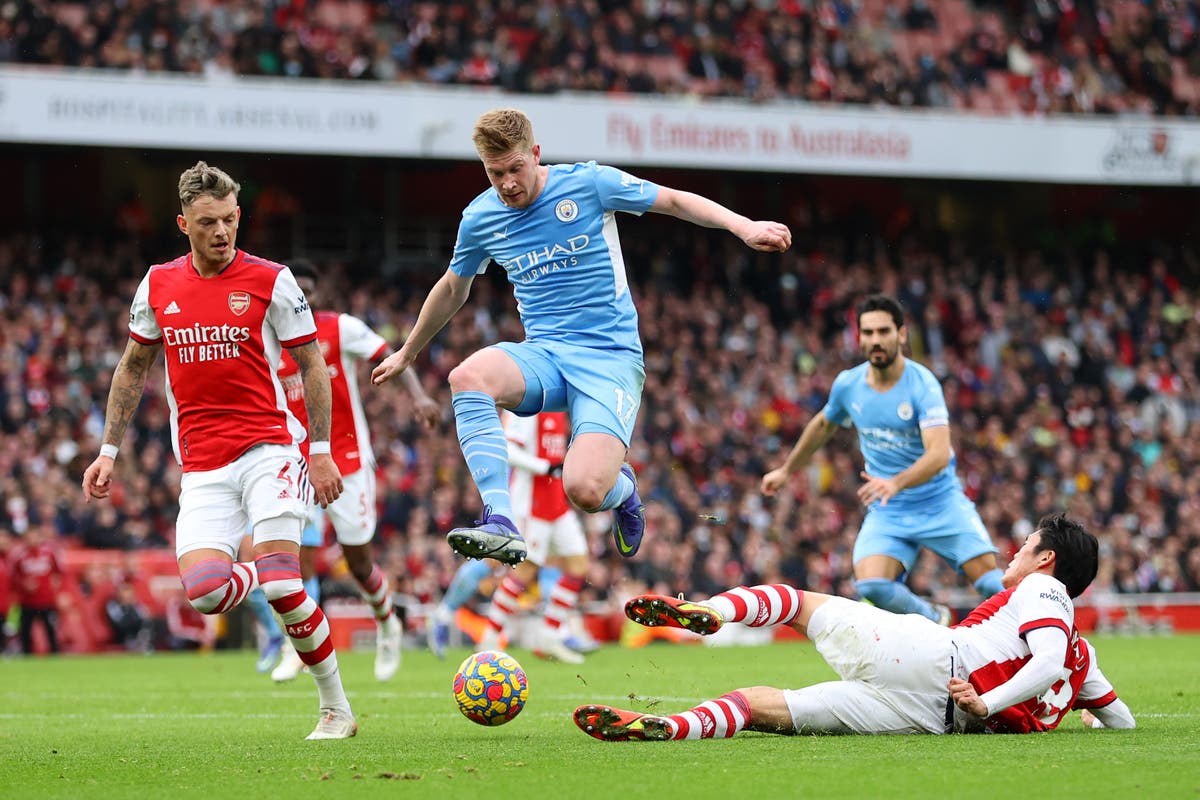 Arsenal are hosting Manchester City in the first Premier League match of 2022 in a meeting of two sides in impressive form.

The Gunners have won their past four successive games to lift themselves into pole position in the race to finish fourth, four points clear of West Ham and Manchester United and five ahead of their north London rivals Tottenham, although Spurs have two games in hand. City meanwhile have not lost in the league since October and have built an eight-point gap two second-place Chelsea, while Liverpool – who visit Stamford Bridge tomorrow – are a further point behind with a game in hand.

Both teams are affected by Covid-19 in some way. Arsenal manager Mikel Arteta is watching from the game from home while isolating after a positive test result, so assistants Albert Stuivenberg and Steve Round will take charge, while City are without Phil Foden, put down to a lack of fitness. Follow all the action from the Emirates Stadium below.

WOW – Arsenal failed to clear the free kick and De Bruyne swings the ball in towards Laporte. It breaks to Rodri – who turns it home for a dramatic late winner. He rushes to the corner where the Arsenal fans were, removing his shirt, and is pelted with objects.

This second half has been absolutely wild, and that could be a huge late winner for City.

90+2 mins: Cancelo wins a free-kick from Tierney on the right edge of the box after the left-back clumsily outstretched his leg.

90 mins: But nothing comes of it. De Bruyne heads clear.

There will be SIX minutes of added time.

89 mins: Arsenal win a late corner after Partey flips the ball over Ake’s head – who puts it behind under pressure from Smith Rowe.

87 mins: That’s better from City. They get the ball out to Mahrez who drives at Tierney. He beats him around the outside before Xhaka gets across to block the shot out for a corner.

Arsenal are able to clear – but only after there’s a coming together between Ramsdale and Dias as he tried to collect the ball over his head. Ramsdale rather dragged Dias down, who then appeared to kick out at the goalkeeper. Dias was also offside anyway.

86 mins: City have not played well since Gabriel’s red card – but Arsenal are still having to do plenty of defending. Tomiyasu wins an important header at the back post before Ramsdale collects Sterling’s cross, which had taken a touch of the defender.

84 mins: Arsenal make their third and final change as Saka makes way for Elneny. Saka has been brilliant again today but saw little of the ball after Arsenal went down to 10.

81 mins: There’s a coming together between Laporte and Martinelli after the Manchester City defender passes the ball back to Ederson. Arsenal then win a free kick as Sterling handles a switch from Rodri. It’s all getting a bit heated and tetchy out there.

79 mins: Another good sight for Arsenal, as Cancelo tries his luck with an ambitious effort after cutting onto his left foot.

77 mins: Close! Mahrez loses the ball easily in the corner and Partey gets the chance to carry the ball into the City half. He looks for Martinelli with a square ball and Laporte almost gets caught as his touch towards Ederson was short. The goalkeeper was eventually able to hack clear under pressure from Martinelli.