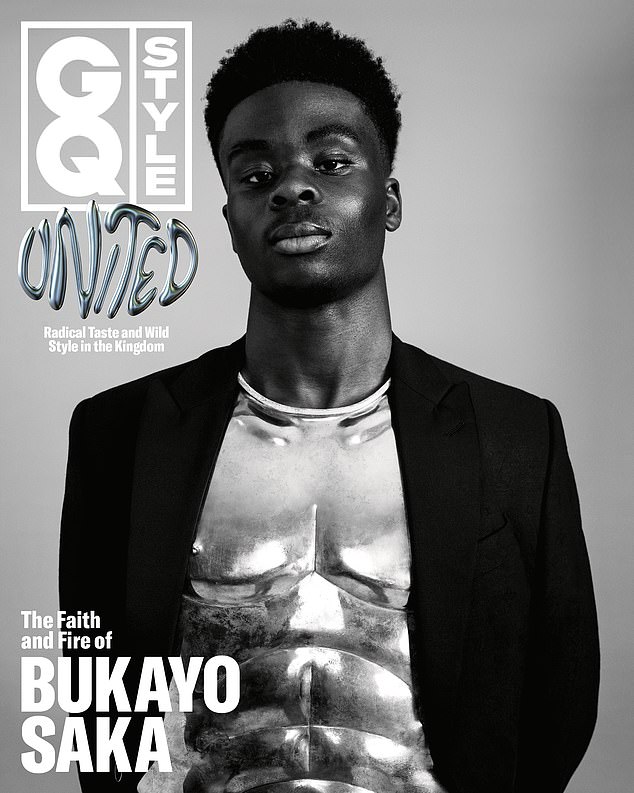 Arsenal winger Bukayo Saka claims Sergio Busquets is the best player that he has played against, as he appears on the latest cover of GQ Style magazine.

The 20-year-old, who is taking to the Premier League by storm and becoming one of the most beloved young superstars in the sport has revealed plenty in his feature, including what music he listens to in the car with his girlfriend.

The England international sported a number of different looks, but what perhaps caught the eye of most, is the surprise of Busquets being the top player he has played against.

Saka lauded the defensive midfielder Busquets as ‘elite’, although he has faced a number of top talents already in his short career.

The winger played against the legendary Barcelona and Spain midfielder in a pre-season friendly in August 2019 when he realised his ability.

‘Sergio Busquets, the way he just so elegantly turned me! [in a pre-season friendly in August 2019] I came at him to press him, I tried to fake this side then go to the other, and the way he just embarrassed me.

Saka also revealed in his interview with GQ that two of his favourite artists are Central Cee and Ed Sheeran.

He tends to listen to the latter with his rumored girlfriend Tolami Benson while driving, although the pair have not even made their relationship public, and have tried to keep it under wraps on social media.

‘When I’m in the car with my girl, we listen to Ed Sheeran!’

The England international has also spoken about his heritage and how faith fuels his fearlessness when stepping out onto the pitch.

‘Throughout life, you keep exercising your faith, so when you get into different challenges, you decide, ‘this time I’m going to trust God’, and God comes through for you.

‘That’s how it kept building and building for me, so I can be confident and go into places knowing that God’s got me. That’s why a lot of times I can be fearless.’

Saka, who has Nigerian parents revealed why he is called Bukayo and the meaning behind his name.

‘My grandma gave it to me because of its meaning. It means ‘God has added joy to my life.

‘She wanted me to add joy to the family, so she named me that… Every time she called me, that’s probably what I meant to her.’

Saka, who grew up in Greenford, a quiet and unassuming suburb in west London, was regarded as a model student at his local high school, but his focus was always football.

The youngster admitting at youth level, no one knew who would end up making it into the Gunners first-team, as they had such a talented squad.

‘Our coach would always say – even when we were young – he would look at the group and say, ‘only one or two of you is going to make it,’.

‘We would all look at each other because we were all so good, we were unbeaten, and everyone was baffled, like, who’s it going to be?’

Saka has netted nine times in 29 appearances so far this campaign, and picked up five assists

‘I remember watching him at Hale End, and he went past three players so easily, and the ball came to him a couple of times and he just popped it off, one touch, and moved.

‘He was just doing stuff in that game that a player of 25 years of age would do. I said, ‘He’s going all the way to the top – no danger.’