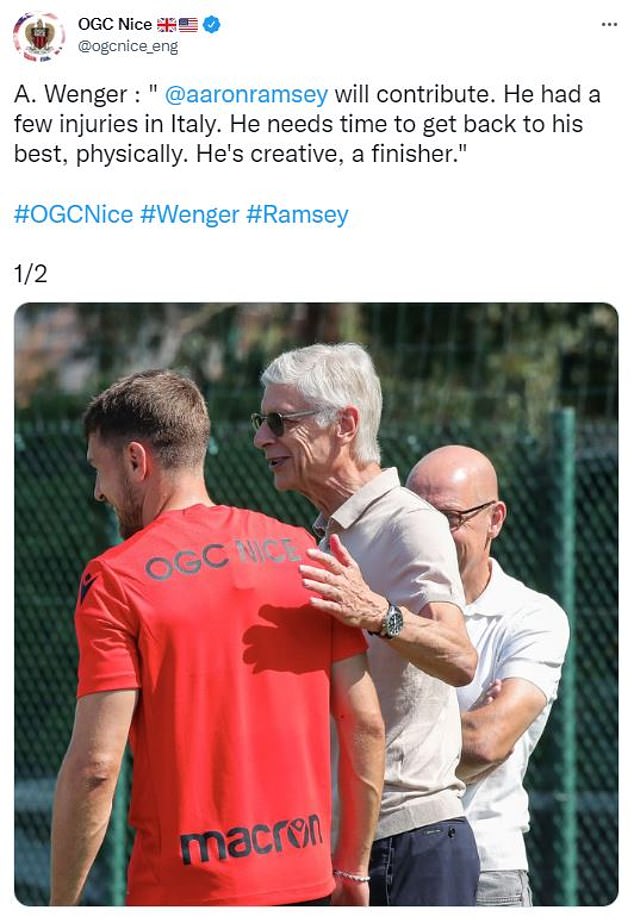 Reunited! Arsene Wenger links up with his former Arsenal midfielder Aaron Ramsey after visiting Nice’s training ground as the ex-Gunners boss backs the Welshman to ‘contribute’ in Ligue 1 and ‘get back to his best’

By Michael Rudling For Mailonline

Aaron Ramsey had a chance to catch up with his former Arsenal boss Arsene Wenger this week, when the legendary manager visited training at Ramsey’s new club Nice.

The Welshman joined on a free transfer earlier this month, and has already made his mark with an eye-catching goal on debut.

Wenger’s visit had been planned for some time, and was originally teased by the club’s manager Lucien Favre during Ramsey’s unveiling.

The 72-year-old was pictured placing a friendly hand on Ramsey’s back as the pair shared a joke in training.

Wenger knows the 31-year-old midfielder well, as he signed him from Cardiff after the club’s impressive FA Cup run in 2008 and, managed Ramsey for all but one of his 11 seasons at the Emirates.

He said of the midfielder: ‘He had a few injuries in Italy. He needs time to get back to his best, physically. He’s creative, a finisher.’

On starting a new chapter of his career with Nice, Ramsey said: ‘I am very happy to be here and to be part of the project. I am very excited to arrive in this young and talented team.

‘I feel very good. I trained well this week and discovered a staff fantastic. My experience at Juventus took me out of my comfort zone.

‘I had been at Arsenal for a long time. Today I have a new opportunity and I can’t wait to start this adventure.’

The 31-year-old will be hoping for regular playtime as he looks to nail down a place for this winter’s World Cup in Qatar.