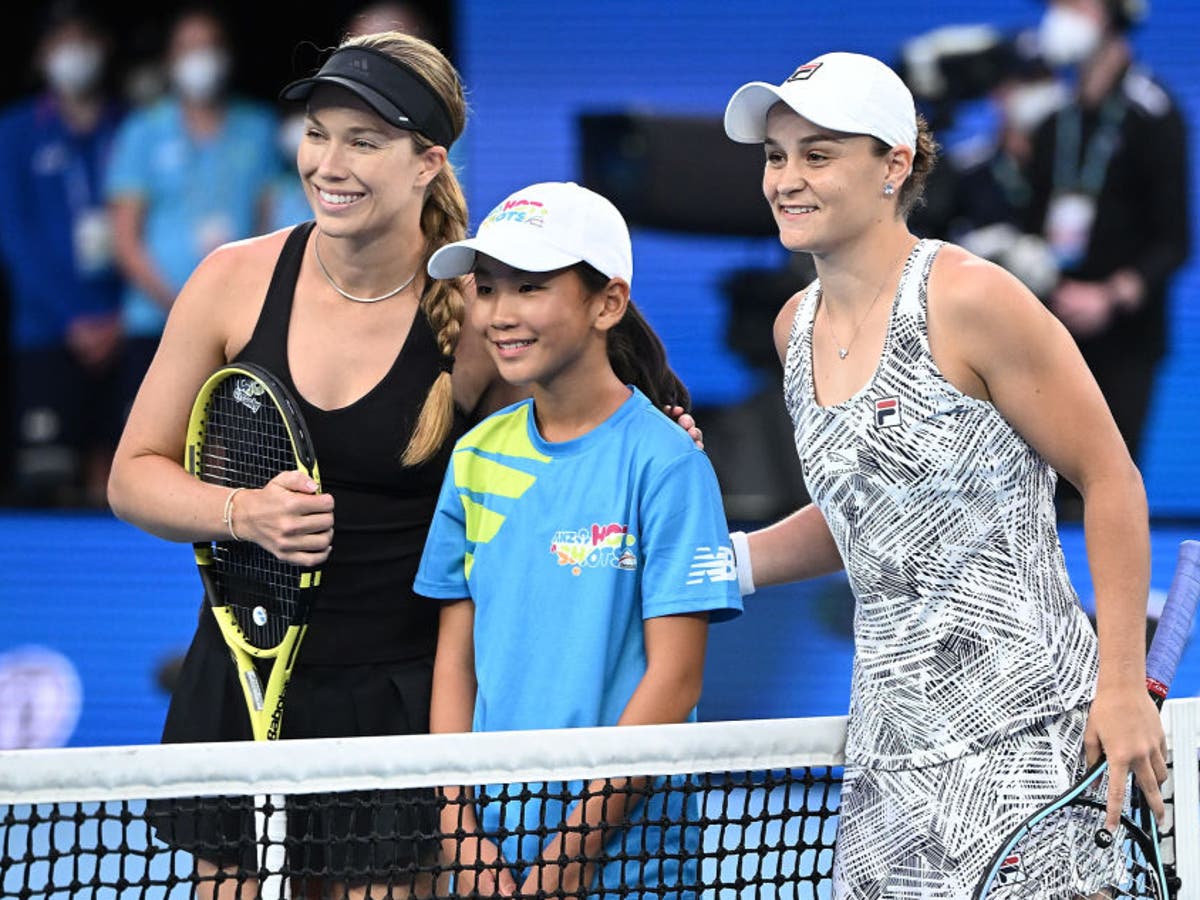 Follow all the action as Ashleigh Barty takes on Danielle Collins in the final of the women’s singles at the Australian Open.

Barty, the world No 1, is attempting to become the first Australian to win the grand slam on home soil since Chris O’Neil in 1978 and has been in tremendous form throughout the tournament. The 25-year-old has not dropped a single set and required just 62 minutes to race through her semi-final against Madison Keys to reach the final in Melbourne for the first time.

Collins, the No 27 seed, has defied expectations to reach the first grand slam final of her career. The American, who underwent surgery for endometriosis last year, is a significant underdog heading into the match but proved she is very much a threat to Barty’s coronation with an emphatic victory over Iga Swiatek in the semi-finals. It took Collins just 78 minutes to complete a 6-4 6-1 rout of the former French Open champion.

Collins is equal to it, though. A tame second serve is pounced on by Barty at the start of the game but Collins responds emphatically with a brilliant forehand winner that just clips the line. A service winner is then followed by an unusually tense Barty slice backhand that drifts long. That betrayed a little of the tension that must be there, despite how well Barty conceals it. Collins closes out the game.

An assured start for Barty. The world No 1 races to 40-0, courtesy of three fine serves. She’s pegged back to 30 after a pair of loose backhands but closes out the game confidently.

Barty gets a huge reception as she walks out onto Rod Laver Arena. This is a final Australian tennis fans have been anticipating for several years. Collins doesn’t look flustered, though. We’re just minutes away from the start of this match.

The players have entered the warm-up area and will be out on court very shortly. Collins will never have faced an atmosphere quite like this in her career, but she does carry the confidence of victory the last time these two met. It was in Adelaide in 2021 and Collins won somewhat comfortably even in straight sets. The world No 1 had prevailed in all of their three previous contests up until then, though.

Collins has only dropped one set herself en route to the final, against Elise Mertens back in the fourth round. Her semi-final victory over Iga Swiatek was the most emphatic and impressive, though, beating the former French Open champion 6-4 6-1.

Barty’s route to the final has been seamless and she required just 62 minutes to sweep aside Madison Keys in the semi-finals.

Few would have predicted Collins would be Barty’s opponent in this final, not least because of the health challenges the American has faced.

In the middle of the Australian summer last year, Collins was struck by such a severe pain that she collapsed on court. MRI scans failed to detect the cause of the pain until April 2021, when she underwent a major operation to remove “a cyst the size of a tennis ball” on her ovary.

“At Wimbledon in 2018, I was walking to practice and I started having the sharpest pain in my lower back and stomach. I actually fell over and I couldn’t get up. I had to have a cart to take me to transportation so I could get home. My hitting partner was looking at me, thinking, ‘Is she being over-dramatic, making a scene?” Collins told The Telegraph last year.

“It was the same in Australia [last] year, during the quarantine, when I fell over on the practice court and I was lying there on my back.”

“When I found out what it was, I was shocked – but also hopeful, because I was at rock bottom with the physical agony, and I didn’t know how I was going to keep playing tennis.”

Australian Open 2022: Barty locks out media ahead of final

Barty has been typically calm throughout the fortnight but made the rare step of closing her final training session to the media earlier today.

The Australian is hoping to block out the public’s excitement and anticipation, with close friend Casey Dellacqua saying Barty may even “be a little bit oblivious” to the pressure.

“She’s the world No 1, the top seed, it’s in Australia, and it’s a grand slam final. That’s like the trifecta of pressure, isn’t it,” she said.

“Why not keep as much out as possible. I think what we’ve learnt from Ash since she’s come back… she’s much older, confident, mature, and she’s very clear about what she wants and she needs.”

Barty, the world No 1, is bidding to become the first Australian to win on home soil since 1978 but has rarely exhibited any signs of that pressure, cruising through to the final without dropping a set.

Collins, the 27th seed, is likely to be more susceptible to nerves, with the American competing in her first grand slam final. She will have to contend with a partisan crowd on Rod Laver Arena, but Collins was mightily impressive in the semi-final victory over Iga Swiatek and certainly has the skill to cause what would be a major upset in Melbourne.