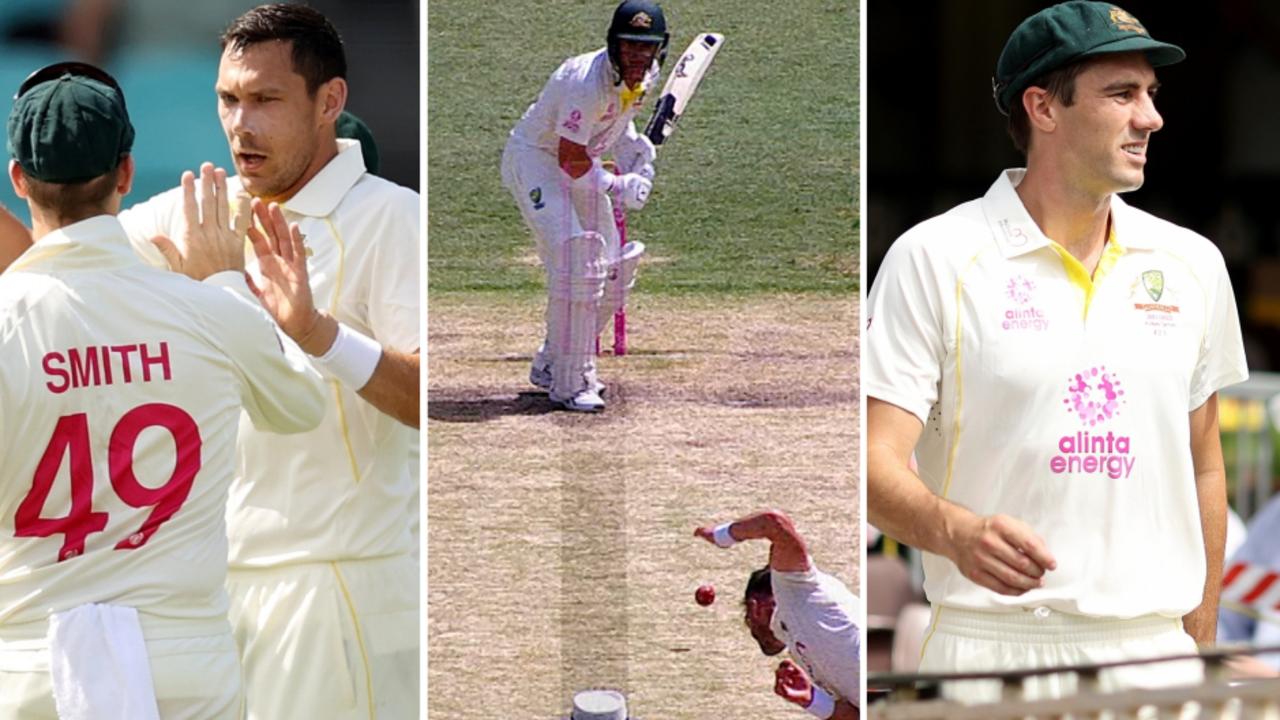 The fourth Test has resumed on day four with England being bowled out for 294 following the eventual dismissal of Jonny Bairstow for 113.

In response, Australia is 2-66 and leading England by 188 runs at lunch with Marnus Labuschagne (28) and Steve Smith (8) at the crease.

David Warner was the first wicket to fall for Australia, caught behind off Mark Wood for three runs off 18 balls.

Under pressure opener Marcus Harris followed just before lunch, brilliantly caught behind by Ollie Pope off the bowling of Jack Leach for 27.

The opener now faces a nervous wait to learn whether or not he will be retained in Hobart after Usman Khawaja scored a century in the first innings.

Follow all the action in our live blog at the bottom of the page!

‘F*CK YOU, D**KHEAD’: Warne’s sad admission over the greatest Test series ever seen

READ: The awkward Marnus question too hard to ignore in Smith’s unexpected dip

Meanwhile, England has once again come under fire for showing a conservatism when spinner Leach has the ball.

As has been the case all series, Leach has once again bowled to overly defensive fields which has allowed Australia’s batters to easily rotate strike without taking any genuine risk.

“I just can‘t see how someone can’t see this in the English camp,” Mark Waugh said in commentary.

“ It’s just bewildering me, these tactics. I know they must have their reasons, but we talk about it every Test match.”

Earlier, Bairstow, who on Friday scored England’s first century of the Ashes series, was eventually dismissed in Saturday’s first session with Scott Boland drawing an outside edge.

His eighth-wicket partnership with Stuart Broad was worth 23 runs and saw Australia come under fire at its start for allowing the tailender to get off strike too easily.

“I was a little surprised all those fielders were back then, they should have been up to stop the one to keep Stuart Broad on strike, that was poor captaincy there,” Shane Warne said on Fox Cricket at the start of the partnership.

“Too many easy gaps there, too many easy singles. They should have all come up and made Jonny Bairstow try and hit it over the top for four which might have caused a wicket, but just do not give him a single so that Stuart Broad stays on strike.

“That was poor from the Australians.”

The last wicket to fall was that of Broad (15) who skied a Boland delivery to give the Aussie cult hero figures of 4-36.

Boland now has scary career figures of 11 wickets at 8.27.

Australia burnt a review in the second over of the day after curiously going upstairs on a half-hearted appeal for caught behind on Leach. Snicko showed no sound and replay showed clear space between bat and pad.

With few Australians even appealing, Adam Gilchrist joked that an over-excited Marnus Labuschagne might have been to blame, saying: “Might be Marnus’ work, this.”

It mattered little in the end, however, with Leach top-edging a sweep shot to Nathan Lyon the following over.

“That’s really disappointing, I think there was no need for Leach to do that,” Shane Warne said on Fox Cricket. “Time is just as important as runs … Bairstow just needs someone to hang in with him.”

Meanwhile, England keeper Jos Buttler will hand the gloves to Ollie Pope in Australia’s second innings after suffering an injury to his left index finer. England said in a statement it would evaluate the extent of Buttler’s injury at the end of the Test.

On Friday, while walking off at the Tea break with batting partner Ben Stokes, the pair stopped and eyed off a fan who was “bad mouthing” the English players.

The fans were said to have made jibes at both batsmen’s weight, before Stokes gave a deadly stare at the mouthy crowd members while Bairstow fired back saying “that’s right, just turn around and walk away. Weak as p***.”

NEW PODCAST – ‘A contest would be nice’: Ultimate SCG Test preview OR SUBSCRIBE IN ITUNES OR SPOTIFY

Bairstow had the last laugh, finishing the day on 103 from 140 balls, hoping to steer England closer to Australia’s huge total.

“It was just a bit of bad mouthing from the crowd and obviously it is not the greatest and it’s not needed,” Bairstow said after the day’s play.

“We are out there trying to do our jobs, people are out there enjoying the day’s cricket and unfortunately sometimes you have people that overstep the mark.

‘NEVER SEEN ANYTHING LIKE IT’: ‘Bizarre’ cricket anomaly stuns as clue to mystery revealed

‘WHAT’D HE SAY TO YOU?’ Tempers flare as Starc sledge ignites Ashes

“I think it is important to stand up for ourselves, because if we aren’t standing up for ourselves as well you can cop it and especially when people overstep the mark they need to be told.”

The Sydney Test has had no shortage of crowd members making inappropriate comments in recent years and only 12 months ago Indian fast bowler Mohammed Siraj was allegedly racially abused.

“It would have been nicer if they’d been there giving it when we walked off at the end… Unfortunately they weren’t and missed the end of a fantastic day’s Test cricket,” Bairstow added.