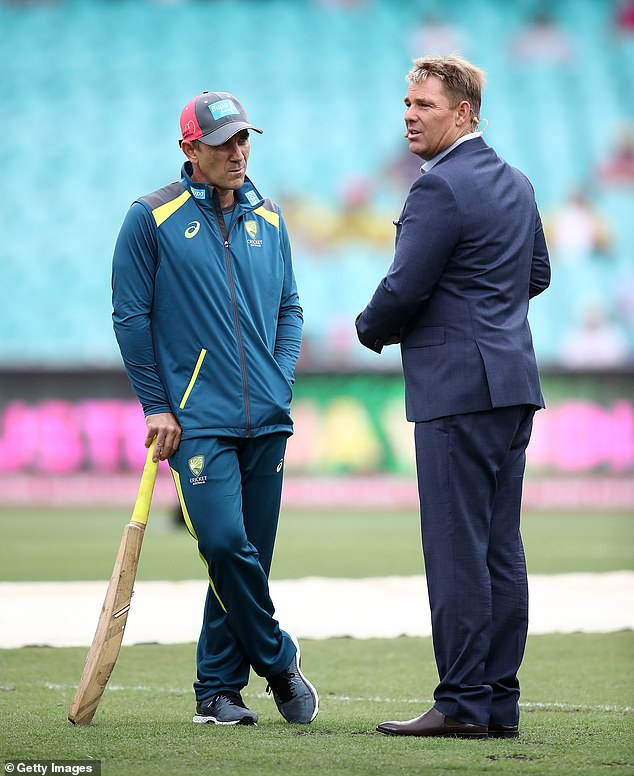 Langer said it was a heartbreaking day for cricket to have two of the sport’s giants, Warne and legendary wicketkeeper Rod Marsh, die.

The pair were at the Cricket Academy in Adelaide together when Warne, 52, and Langer were fresh faced 18-year-olds and ‘spent their whole cricket lives together’.

‘I remember, we used to live in the Alberton Hotel which is a pub in Port Adelaide, that was the accommodation for the kids at the Cricket Academy,’ Langer told 6PR.

‘Then [he would] bowl his flipper up and down which would nearly kill everyone flying off the back of end of the pool table.

‘He was just like a lovable rogue back then and he obviously transcended into this superstar, this rock star who was also the greatest player up with Sir Donald Bradman we’ve had,’ he said.

Warne is widely regarded to have redefined spin bowling and holds the record as Australia’s top Test wicket-taker with 708, and second only to his rival and great friend, Sri Lanka’s Muttiah Muralitharan.

Langer and Warne retired on the same day along with paceman Glenn McGrath at the tail end of Australia’s 5-0 Ashes win in 2006-07 and one of Australia’s most successful Test eras.

‘We won a lot because of Warnie, that’s for sure,’ Langer said.

Teammate and then Australian captain Ricky Ponting said the loss was ‘hard to put in to words’.

‘I first met him when I was 15 at the Academy. He gave me my nickname.’ he tweeted on Saturday.

‘We were teammates for more than a decade, riding all the highs and lows together. He was someone you could always count on, someone who loved his family.’

As well as a superstar on the field, Langer remembered ‘The King of Spin’ as ‘intensely loyal’.

‘He looked after his mates, he didn’t mind rocking a few boats if he had to, if it was about his mates so he was a very loyal, kind and caring person,’ he said.

Warne suffered chest pains before he travelled to Koh Samui in Thailand for a holiday, where he died from a suspected heart attack on Friday, Thai police say.

He was staying in a private villa with three friends, one of whom performed CPR after finding him unresponsive when he did not show up for dinner.

Celebrities, politicians and adoring fans lined up to recall their memories of the legendary leg-spinner.

Others left flowers, meat pies, beers and cigarettes at his statue outside the MCG, where the southern stand will be renamed the SK Warne Stand in his honour.

The Victorian and federal governments have both offered a state funeral to his family, which includes Warne’s daughters Brooke, 24, and Summer, 20, and 22-year-old son Jackson.

‘Nobody who saw Shane Warne play will ever forget him,’ Victorian Premier Daniel Andrews said on Saturday.

‘To us, he was the greatest – but to his family, he was so much more.’

Hollywood star Russell Crowe tweeted he was having a hard time accepting the news.

Rolling Stones frontman and passionate cricket fan Mick Jagger tweeted: ‘He brought such joy to the game and was the greatest spin bowler ever’.

Prime Minister Scott Morrison offered his condolences to the Warne family in a written statement.

‘Shane was his own man, following his own path,’ Mr Morrison said.