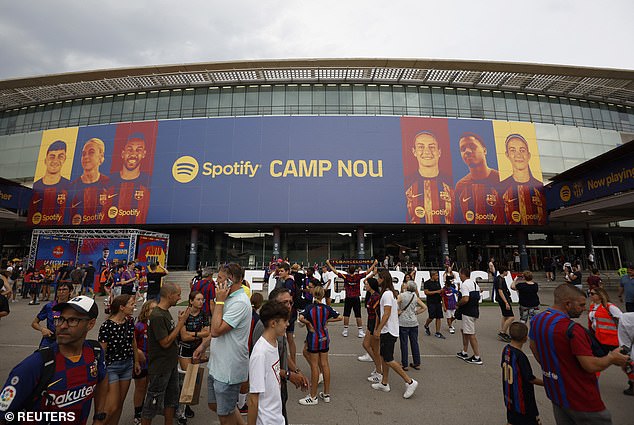 Barcelona have sold another 25 per cent of their in-house production hub for £85million to help boost their finances in a bid to register their summer signings ahead of their first game against Rayo Vallecano.

The decision to activate their fourth ‘economic lever’ comes a month after the club signed a deal with Socios.com to sell off 25 per cent of their stake in Barca Studios last month.

Barcelona’s most recent deal has taken place with  Orpheus Media – who is run by the 72-year-old Spanish media mogul Jaume Roures.

Roures is also the chief executive of MediaPro – which is the company that signed a £2.75billion TV deal to broadcast Ligue 1 games in the summer of 2020.

However, Roures’ company defaulted on their payments in October and pulled the plug on the contract just five months into the four-year deal until 2024.

Barcelona have activated their fourth ‘economic lever’ to offset the debt they find themselves in after years of mismanaging the books.

An official statement from the club said: ‘With this investment the strategic partners in Barca Studios show confidence in the value of the project and the future of digital content in the world of sport.’

Barcelona are currently struggling to register all their new signings before the first game of the season. However, they are confident the new deal will stump up the required funds.

As it stands, Robert Lewandowski, Ousmane Dembele, Raphinha, Franck Kessie, Andreas Christensen and Jules Kounde all need to be registered before Barcelona take on Rayo Vallecano on Saturday.

The reason why Barcelona have not managed to register their players is because they are currently too close to their spending cap. The registration of new players is intrinsically linked to the club’s finances through LaLiga’s system.

Therefore, Barca would need to generate additional funds by selling some of their key players, trimming their wage bill or activating ‘economic levers’ by selling parts of their domestic TV rights deal or offloading sections of Barca Studios.

Barca felt like they had done enough to satisfy LaLiga but the two institutions were on different pages. The club sold 25 per cent of future TV rights but there was a difference of opinion when it came to deciding how much money they had raised from it. They declared €667million (£564m) but LaLiga only accepted €517m (£438m).

The difference can be explained by them forming a spin-off company called Locksley Invest with the US investment fund Sixth Street of which Barça and Sixth Street both own 50 per cent.

Meanwhile, Gerard Pique has taken a pay cut and there are moves to persuade other veterans to do likewise but as of yet they have not done enough to satisfy LaLiga.