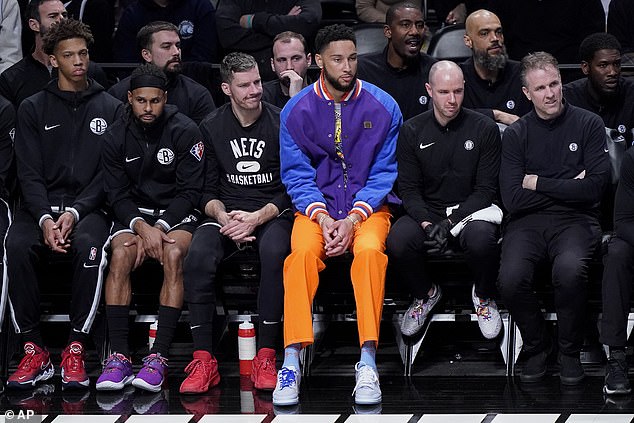 ‘This dude has zero competitive fire’: Ben Simmons is blasted by NBA legend Reggie Miller and a host of experts for ‘quitting’ on the Brooklyn Nets as they face crucial playoff game

By Josh Alston For Daily Mail Australia and Aap

Ben Simmons has been ruled out of Game 4 of Brooklyn’s playoff series against Boston and current and former NBA personalities and players have lined up to blast the Aussie star.

With the Nets on the precipice of being eliminated in straights sets by the Celtics after falling into an 0-3 hole, it is likely that Simmons will finish the NBA season without playing a single game.

After his controversial mid-season trade from Philadelphia to Brooklyn, Simmons has still not played a second of NBA action in the current season.

The Nets listed Simmons as out Sunday on the injury report for the game Monday night, when they will be trying to avoid a sweep by the Celtics.

Simmons has been working his way back from a herniated disk in his back and coach Steve Nash said before Game 3 on Saturday that the No. 1 pick in the 2016 draft had no setbacks after a 3-on-3 scrimmage earlier in the day.

But he also cautioned there was still a lot to consider as they weighed inserting Simmons into a game when he hadn’t played since Game 7 of the Eastern Conference semifinals last year for Philadelphia.

Former NBA star Reggie Miller – who toughed out almost two decades in the league – led the chorus of condemnation of Simmons and said the Aussie had ‘no competitive fire’.

‘Cmon MAN!!! Out for Game 4 when it was rumoured you were going to make your debut. This dude has ZERO competitive (fire). As small a chance as the Nets have to come back in this series, you still have KD and Kyrie, all you need is to win ONE game and take it from there,’ he Tweeted.

Expecting Ben Simmons to play his first #NBA game in a year in a must-win playoff elimination game is pretty ridiculous from the Nets or the Simmons haters. Injured or not that’s putting a player who is a focal point of criticism from certain fans and media in a no-win situation.

‘Mentally, I feel bad for the guy. I feel bad because not playing in Philly and not playing at all with the Nets. There are some real issues out there,’ he said.

However, popular media personality Stephen A. Smith also lined up Simmons for a ‘pathetic’ pattern of behaviour throughout his career.

‘I feel bad for anyone who is his teammate. He quit on LSU, he quit on the Philadelphia 76ers and now he ain’t showing up for the Brooklyn Nets,’ Smith said on the ABC broadcast.

‘We can point to all the excuses and rationale behind it that we want to – I do recall that despite him not playing he still filed a grievance to collect $20 million that he has not earned. This is one of the most pathetic situations I’ve ever seen in my life.

Ben Simmons is everything that is wrong with the NBA.

‘He ain’t going to war. He’s not going into the octagon or the boxing ring. It’s pulling teeth to get this man to play basketball.

‘It’s pathetic, it’s sad and at the end of the day when the NBA gets to the collective bargaining table and they go after players in terms of a pay for play stipulation in the agreement, it’s going to be called the Ben Simmons rule.’

Following the 76ers exit from the 2021 playoffs Simmons then requested a trade and refused to play for the 76ers this season, citing mental health concerns.

Philadelphia sent him to Brooklyn in February in a trade deadline deal for James Harden, but Simmons began to experience back pain soon after while trying to work his way back into shape.