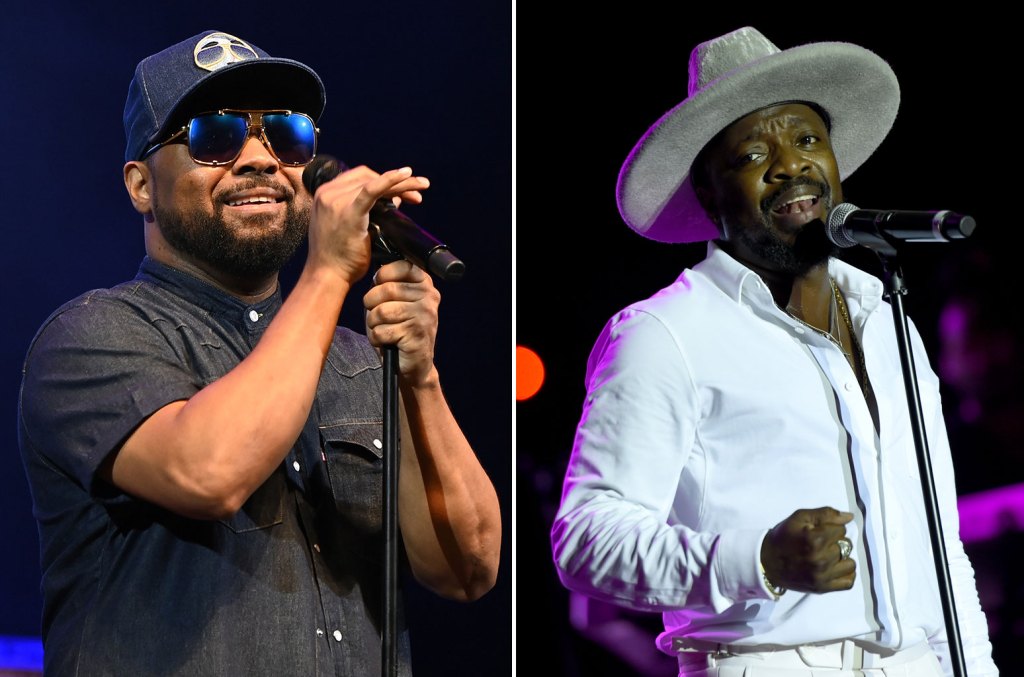 The Los Angeles Verzuz battle between Anthony Hamilton and Musiq Soulchild took fans down soulful R&B memory lane on Tuesday night (Feb. 15), thanks to the epic vocal showdown that was complete with back-to-back hits from both sides, plus a slew of surprise guest appearances and a few dance breaks that left the crowd wondering what would happen next.

Hamilton and Soulchild drew a major audience to the historic Avalon Hollywood venue for the Verzuz Valentine’s Day Special, which began around 6:20 p.m. PT after DJ KTone and DJ Popo dueled on the turntables as part of Triller’s Resident DJ Competition. The DJs were competing for a chance to win a $1 million salary, per Triller, as the crowd looked on enthusiastically waiting for the official showdown to begin.

But first, host DJ Scratch took a moment to shoutout the great Mary J. Blige for a phenomenal Super Bowl 2022 Halftime Show and the Feb. 11 release of her new album Good Morning Gorgeous. “We wanna honor her,” he said. “She killed it.” Scratch later joked, “Any gorgeous ladies in the house? Start your day with Good Morning Gorgeous. Any fellas in the house? Greet the ladies by saying, ‘Good morning gorgeous.’”

“This is the first Verzuz of 2022,” Scratch announced, before adding, “Ever since the pandemic in 2020, I don’t count any of those birthdays or nothing. When this clears up, I’ll start celebrating my birthday again.”

DJ Zum was the last disc jockey to appear before Musiq and Anthony hit the stage. Spinning music from Jill Scott, Jazmine Sullivan, 702, Sade, LL Cool J and more — the R&B mood was officially set in the dimly lit venue before Musiq Soulchild and Anthony Hamilton delivered an incredible set of performances.

Launched by Timbaland and Swizz Beatz amid COVID-19 as a way to bring hip-hop and R&B listeners together, it’s clear that Verzuz is still going strong after Tuesday’s special event. Here’s a recap of the seven best moments from = Musiq Soulchild and Anthony Hamilton’s sensational Verzuz.

Fans were surprised to see Jermaine Dupri inside the Avalon Hollywood — then they were even more surprised to learn he would DJ Hamilton’s entire set. “My man Anthony Hamilton just came off tour, he’s got a few words he wants to say to y’all,” the proud DJ and supportive friend said before Hamilton hit the stage. Of course, Jermaine Dupri — who recently founded JD’s Vegan Ice Cream — was subtly promoting his healthy new dessert line by rocking a black “JD’s Vegan” hoodie. The pair checked in periodically through the night as Soulchild performed — likely to discuss the remainder of the set.

Grammy-winner and Charlotte, North Carolina native Anthony Hamilton was the first to perform and the hitmaker opened with his heartwarming classic, “Mama Knew Love” — in honor of mothers worldwide. “What’s up to all the mothers out there, how y’all feeling?” he asked, to which the crowd belted. “We’re celebrating Valentine’s Day, but we wouldn’t be here without all the mothers. So, let’s give all the mother’s some love!”

Musiq Soulchild gives the only encore of the night

After receiving a hearty introduction from MC Jack Thriller (popularly known for his appearances on Wild ‘N Out), Musiq Soulchild opened his set with the 2002 bop “Break You Off.”

“There’s no soul singer that’s got more hits than Musiq Soulchild,” Jack Thriller declared. But Soulchild showed off his excellent sportsmanship saying, “I’ve got nothing but love for Anthony Hamilton.” Later in the evening, Soulchild showed off once more — but this time, it was his musical talent that spoke for itself. In the only encore of the evening, Musiq Soulchild delivered some extra vocals for his song “So Beautiful.”

Among the many surprises of Tuesday night’s extravaganza, Musiq Soulchild brought Robert Glasper to the stage for a joint performance of their 2012 groove “Ah Yeah.” Though the original song also features Chrisette Michele, Soulchild manned the vocals solo as Glasper played the keyboard live onstage.

But he didn’t have to sing solo when he brought Lucky Daye onstage to give an amazing performance of “Over.” Daye shared a clip from their performance on Instagram shortly after. “Thank you for having me @musiqsoulchild @verzuztv 🙏🏾🍀💫,” he captioned the video.

And while Daye was clearly Team Musiq Soulchild, Hamilton managed to pose for a photo with the rising star onstage while Soulchild performed.

In addition to the incredible vocals by the aforementioned artists, there were also some notable wardrobe details. In signature Big V style, the hitmaker wore a silver “V” pendant throughout his performance. And by the time James hit the stage in her black leather outfit, it became clear why Hamilton had made a quick outfit change to include a black leather jacket atop his beige leather pants.

At one point about midway through the evening, it became increasingly clear that Anthony Hamilton had a major fan in the crowd. The fan began adoringly chanting “Anthony! Anthony!” during every music break. Though the rest of the crowd didn’t join in and pick sides, the fan singlehandedly prevailed. And while the fan remains nameless — ultimately, it was a fun gesture for a fun concert.

Musiq Soulchild and Donell Jones flashback to ’99; plus Musiq spotlights the mother of his child, 702’s Kameelah Williams

The special guest rollout continued as Musiq Soulchild and Donell Jones delivered the throwback Tuesday jam of the night. The pair jointly sang Jones’ top 10 Billboard Hot 100 hit “U Know What’s Up” and the crowd was thrilled.

And as the night progressed, Hamilton wasn’t the only artist to shoutout moms this Valentine’s Day. Musiq Soulchild took a moment to celebrate the mother of his eldest child, former 702 songstress Kameelah Williams. The pair became parents to their son Zac Johnson in 2009.

After Soulchild performed “143,” he told the audience, “I wanna bring somebody special out. She wants to say something to y’all right quick.” That’s when Williams appeared onstage saying, “Thanks y’all, of course I’m here Team Musiq. Thank you Musiq Soulchild, my baby daddy.” She then joked, “He hates when I do that” to which Soulchild said, “We love you, baby.”

The Verzuz Valentine’s Day Special came to a friendly end as Soulchild was joined onstage by Hamilton and friends to deliver his fan-favorite Billboard chart-topper “Buddy” with a west coast twist.