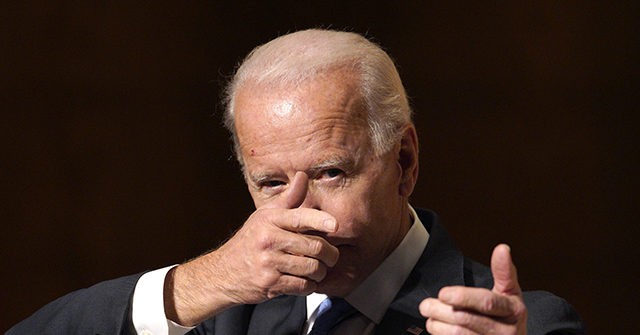 NBC News reported the Secret Service detail was assigned to Biden after his campaign filed a request for one “to senior congressional officials.”

A source told Breitbart News such a detail meant Biden would be protected with pistols and semiautomatic rifles–perhaps ARs and/or Sig Sauer MCX platform firearms. There was also the strong possibility of fully automatic firearms being part of the equation. The latter category of firearms consists of submachine guns, such as the H&K MP5.

The submachine guns are carried on a sling, allowing them to be concealed under an agent’s jacket or coat.

A Secret Service officer stands in front of the limousine of President Joe Biden near Robb Elementary School in Uvalde, Texas, on May 29, 2022. (Yasin Ozturk/Anadolu Agency via Getty Images)

But Biden is urging Congress to bar Americans from owning many of the very guns with which he is protected.

He is protected with pistols, and last year on July 21, Breitbart News pointed out his “push to eliminate” 9mm pistols.

On Memorial Day this year, Biden renewed his criticism of the 9mm platform, placing the 9mm in the category of “high caliber weapons” and claiming it “blows the lung out of the body.”

As for AR-15s and other guns that Democrats refer to as “assault weapons,” Biden regularly expresses frustration that Congress will not act to bar Americans from owning such guns.

Biden is also pushing for a ban on magazines that hold more than ten rounds. He made this push on the campaign trail and during his first year as president, and it continues even now.

On March 11, 2021, Forbes highlighted Biden’s effort to ban “high capacity” magazines, and in August 2021 The Hill quoted Biden saying, “For the 10 years we had it done, the number of mass shootings actually went down. Even law enforcement officials have told me and told other champions of this legislation they sometimes feel outgunned by assault weapons and high-capacity magazines.”

Biden again pushed for a ban on “high capacity” magazines while speaking on May 24, 2022.

The Secret Service agents protecting Biden will certainly be using 30-round magazines in their ARs. Thirty rounds are standard capacity for such a firearm.