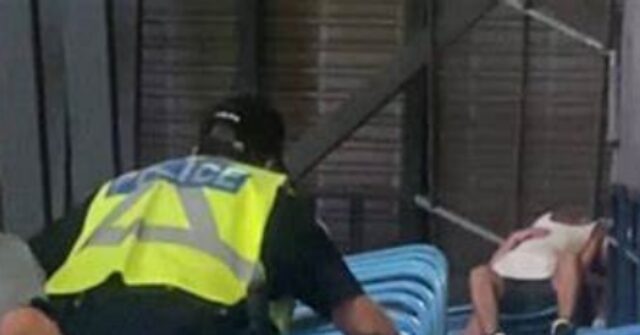 Captured Monday at Rogers Centre in Toronto, the wild moment occurred at the top of the 500 level of the massive stadium as the Blue Jays faced off against the Cubs. Though shot from afar, the video appeared to show the woman straddling the man’s bull region before police arrived to quell the premature victory lap. Take a look:

Two people were seen engaging in an apparent sex act at the Rogers Centre during last night’s Blue Jays game, much to the surprise of anyone near them in the 500s. pic.twitter.com/9viHSXLJ8L

Two people were escorted out of the Blue Jays game after getting caught having sex pic.twitter.com/z7CBTxRpQ7

Jeez, Blue Jays fans were REALLY excited about that comeback against the Cubs. https://t.co/cqtaH2ZWst

Since the Blue Jays eeked out a 5-4 comeback victory against the visiting Cubs, the two lovers may have just been performing their own good luck ritual, thereby adding a whole new level of context to the idea of “turning the juju around.” Whatever the intention, neither the stadium nor the nearby onlookers appreciated the gesture, and the pair were eventually escorted out by security.

According to Blog TO, the Toronto Police Service said on Tuesday “that it had no information related to the incident in question,” which seemed to indicate that “no charges have been laid against anyone for getting laid.”

Neither the Toronto Blue Jays nor the stadium has commented on the incident.

A source also told the outlet that police said “the guy flew in to meet this girl” and “that this was their first meeting.”

Oakland police are also currently investigating a pair of fans who engaged in a public sex act at the Athletic-Mariners game on Sunday.