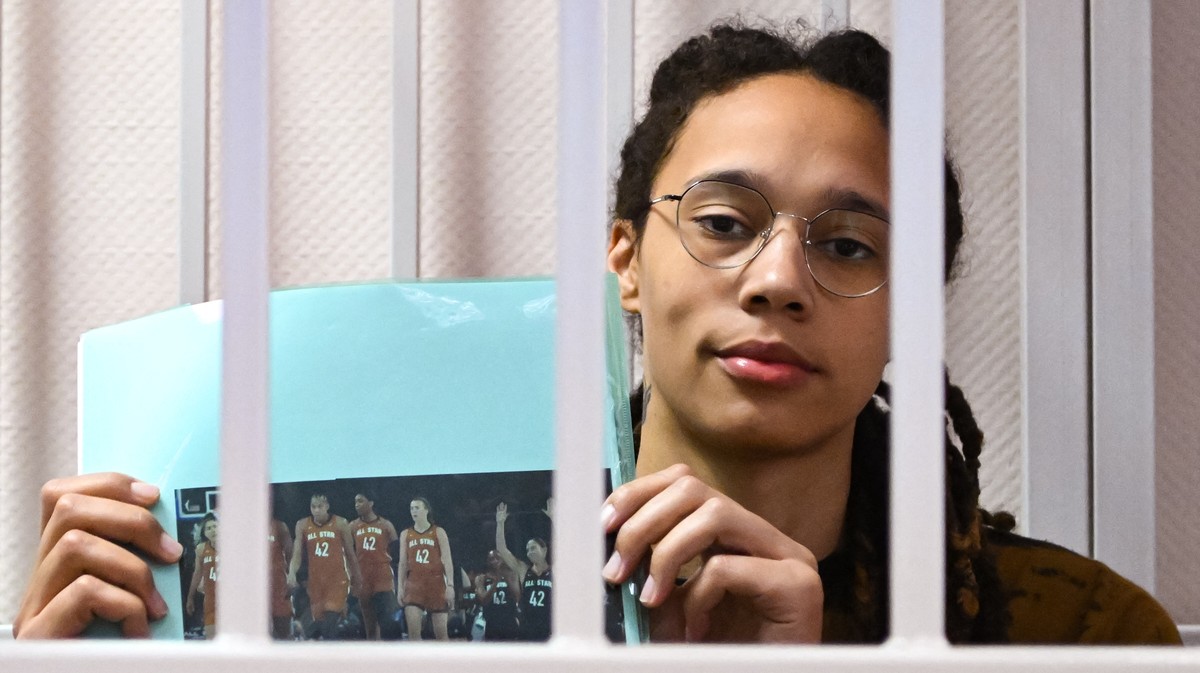 US WNBA basketball superstar Brittney Griner sits inside a defendants’ cage with a picture depicting her WNBA fellow players wearing jerseys with her number, 42, during the leagues All-Star Game, during a hearing at the Khimki Court in the town of Khimki outside Moscow on July 15, 2022. (Photo by NATALIA KOLESNIKOVA/AFP via Getty Images)

Brittney Griner has proof that she had a prescription for the weed she mistakenly brought to a Moscow airport earlier this year. It’s her legal team’s latest effort to secure a lighter sentence, or even clemency, down the line.

Cannabis is legal for both recreational and medical purposes in Arizona, where Griner is from. And on Friday in court, her attorney presented a doctor’s letter allowing the WNBA All-Star center for the Phoenix Mercury to use it to treat her pain, according to the Associated Press.

“The attending physician gave Brittney recommendations for the use of medical cannabis,” Griner’s attorney Maria Blagovolina said during Griner’s second court appearance this week. “The permission was issued on behalf of the Arizona Department of Health.”

Ever since Griner pleaded guilty last week, her legal team has transitioned to presenting her alleged crimes as an honest mistake, not criminal intent. Last week, Griner said in court that the less than a gram of cannabis oil found in her bag was there because she was rushing as she packed for her trip to Russia. The doctor’s note is the latest effort in court to prove she had no ill intent.

While the doctor’s letter is not likely to directly affect the court’s final decision on her sentence, politically it does give Russia some rope to back off punishing Griner to the full extent of their laws, especially if they want an easy way to look more generous on the other end of a story that has since received international attention, according to professor Joshua Tucker, director of NYU’s Jordan Center for Advanced Study of Russia.

“If somebody had a prescription from Indonesia to use heroin for medical purposes, and they tried to enter the U.S. with heroin, I don’t think anyone here would care,” he said. “Maybe it’s a positive signal that there might be more post-conviction options available because it kind of gives a path towards a step down on the side of the Russians.”

Griner, who’s also a two-time Olympic gold medalist, was detained at Sheremetyevo Airport in Moscow on Feb. 17 after Russian customs found the cannabis oil in her luggage. Security footage released weeks later showed her being pulled aside by a customs agent, although concerns have risen that Griner is being held as a political pawn in Russia’s conflict with Ukraine.

Russian prosecutors say Griner broke the law when she brought drugs into the country. She’s been charged with drug possession and smuggling and she faces up to 10 years in prison.

Initially, the U.S. Department of State was fairly quiet about efforts to bring Griner back home, and the public didn’t seem to notice. But that’s changed significantly. This week, during the WNBA’s All-Star weekend, players wore Griner’s jersey number, 42, in solidarity, and sports figures, celebrities and Griner’s wife have shifted from silence to being outspoken about their concerns over her arrest.

Even Griner herself wrote to President Joe Biden asking that the U.S. not forget about her. And with more eyes on her situation than before, Russia might be incentivized to put her incarceration to rest as quickly as possible.

“By being able to say, ‘We understand she had this for medical reasons, she understands she broke the laws of Russia, we’re going to be generous, and let her go,’ it’s an easy way to step away from this altogether,” Tucker said.

Russian state media has hinted that there have been early conversations between the U.S. and Russian about a possible prisoner exchange. The outlet claims that Griner could be exchanged for Russian arms dealer Viktor Bout, who’s currently serving a 25-year prison sentence for conspiring to sell weapons to people who said they planned to kill Americans in 2011. The U.S. has not confirmed these conversations have taken place, according to the New York Times.