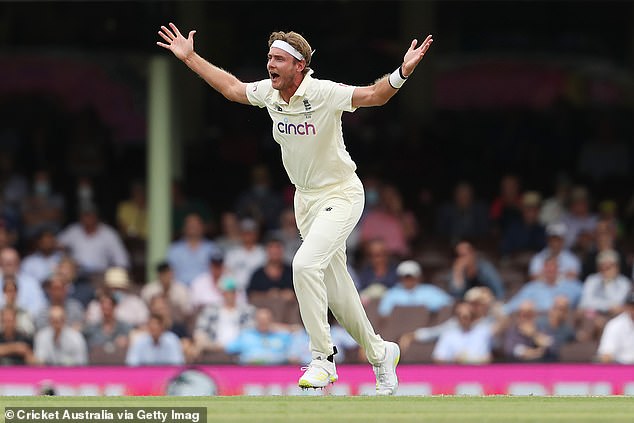 BUMBLE AT THE TEST: There was a touch of the English disease about how Australia’s top three got in and out on day one… and why not scrap these last two meaningless Tests and play six T20 fixtures instead?

By David Lloyd for the Daily Mail

England took two late wickets to earn a foothold in the fourth Ashes Test in Sydney, as Australia dodged the rain showers to reach 126 for three on day one.

Stuart Broad continued to act as David Warner’s nemesis when he marked his return to the side with a familiar looking dismissal against the left-hander.

But Australia were building a strong foundation until late breakthroughs from James Anderson and Mark Wood dragged them back towards parity.

Sportsmail‘s DAVID LLOYD offers his thoughts and insights on the day’s play in Sydney.

I’m proud to say I’ve now officially opened our refurbished phone box in the village that is now an information kiosk, advertising various walks and places of interest.

Neil, the team leader, marked the occasion by saying he wanted Geoff Boycott to do it but he wasn’t available. So I had to do. Then we all retired to the Fauconberg Arms to celebrate….

There was a touch of the English disease about how Australia’s top three got in and got out again, but England did okay on day one.

I know there’s rain about but I reckon that was a good toss to win because Nathan Lyon will have a big say in this Test.

The only way England can avoid that is to get a big lead because you don’t want to be batting last at the SCG.

However you dress it up this Ashes has been a mismatch and the series is done and dusted. So I just wonder in this day and age whether we should be imaginative?

How about declaring the series over at 3-0 and then instead of a Test play three day-night T20s in Sydney? And then three more at Hobart.

The only proviso would be that the same squads should take part. It would stimulate the players, broadcasters and also the fans…

What a contrast to this dead rubber in Mount Maunganui, one of the great cricketing spots, where Bangladesh pulled off a historic victory over New Zealand.

I implore everyone to watch the interview given by Ebadot Hossain afterwards.

It’s one of the best I’ve seen. He’s part of the Bangladesh air force and plays volleyball! Now he’s a cricket hero too…

What memories I have of Sydney.

Like going on Tubby Taylor’s wine tour and fishing at 6am. And spending New Year’s Eve in the harbour on ‘rocking’ Rod Bransgrove’s boat.

I once had an epic night with Andrew Symonds at Jacksons on George Street. Not for the faint hearted, that one.

It was finished off with fish and chips at Doyle’s on the rocks. Think the Magpie at Whitby and you’ll have an idea how good it is…

I agree with Ashley Giles there’s no point sacking everyone at the end of this disastrous series because the big problem is with the system.

The question now is who will ultimately conduct the review and make the big decisions on what comes next.

Here’s an idea – put Jimmy Anderson, Alastair Cook, Angus Fraser, Mike Atherton and Nasser Hussain in the same room. They will have sorted out what English cricket needs to do within an hour.