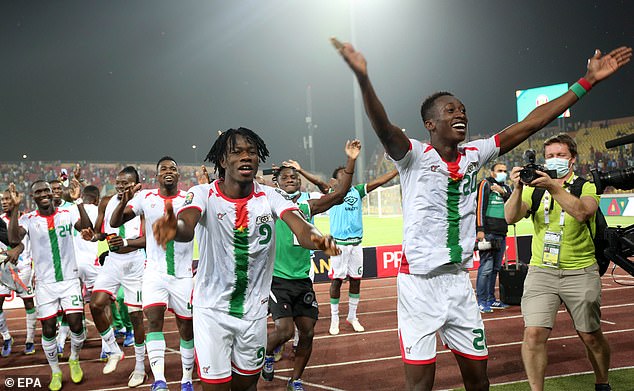 Teenager Dango Ouattara scored on the stroke of halftime to ensure a 1-0 win for Burkina Faso over Tunisia in their Africa Cup of Nations quarter-final at the Roumde Adjia Stadium on Saturday.

Ouattara, 19, held off two defenders to strike home the ball from close range after a breakaway attack in the third minute of stoppage time at the end of the first half.

The striker, who later got himself sent off, was set on his way by a pass from inside his own half from Blati Toure as the Burkinabe played a clever counter-attacking game to advance to the last four of the tournament in Cameroon.

It is the third time in the last five editions of the continental championship that Burkina Faso have got to the semi-finals and they will next take on the winners of Sunday’s quarter-final in Yaounde between Senegal and Equatorial Guinea.

Tunisia had the first chance of the opening half when Wahbi Khazri saw his free kick tipped over the top by Burkinabe goalkeeper Herve Koffi in the 27th minute but the cagey contest suddenly came alive just before the break.

Toure’s long pass was perfectly weighted for Ouattara to run on to but he lost momentum as the defence closed in on him, only to check his run, hold off two defenders and still hammer home his shot.

But Ouattara will miss the semi-final after an aerial challenge where he caught Tunisia substitute Ali Maaloul in the face with his elbow in the 82nd minute.

He was booked but referee Joshua Bondo was encouraged by the VAR to look again at the incident on the pitch-side screen and he changed it to a red card.

Bondo had four minutes earlier also be referred to the screen to check a tackle from Soumaila Ouattara on Khazri in the Burkina Faso penalty area that might have given Tunisia a late penalty and a way back into the game, but decided there was nothing wrong with the challenge.

A busy second half saw Cyrille Bayala come close to a second goal for Burkina Faso, only for Tunisian goalkeeper Bechir Ben Said to make a point-blank stop.

Khazri might have equalised for Tunisia in the 57th minute but scuffed a chance at the back post as he miscued his close-in effort and then again saw Koffi turn over one of his free kicks.

Earlier, hosts Cameroon advanced to the semi-finals with a 2-0 triumph over Gambia.