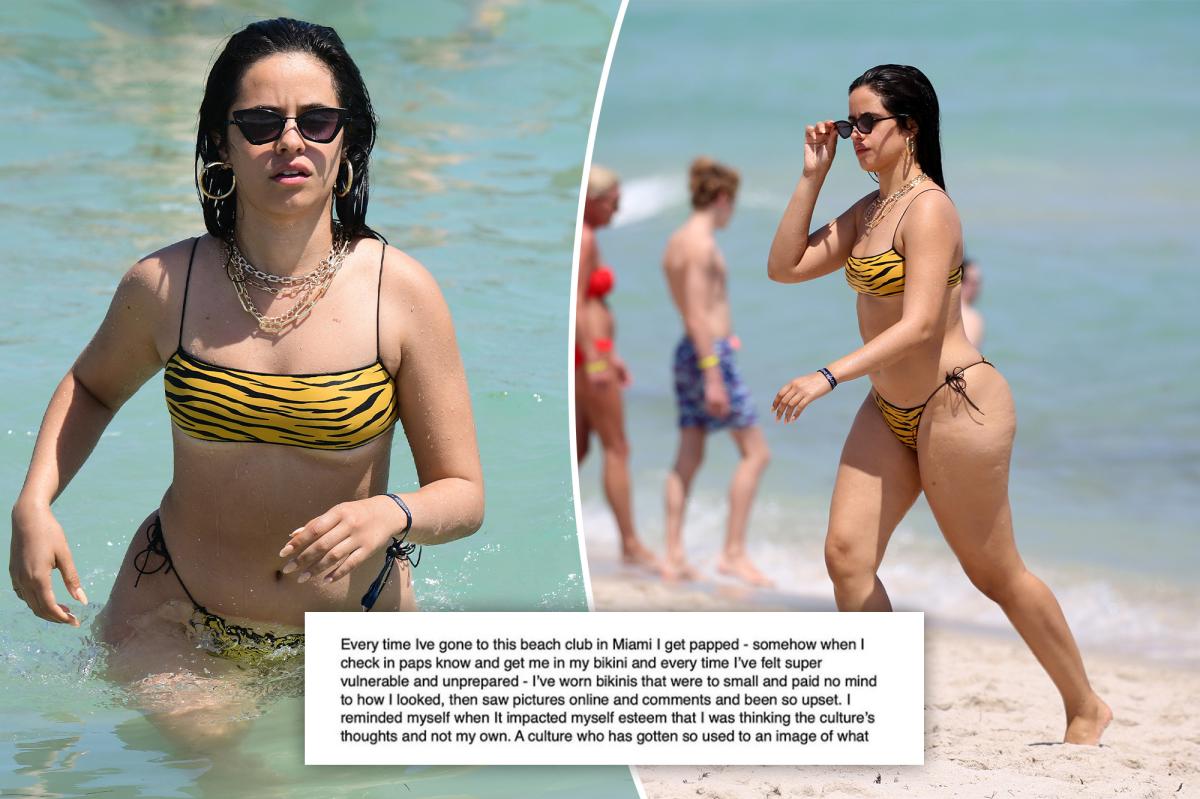 Camila Cabello is slamming the paparazzi for ruining her weekend beach trip in Miami.

In a lengthy post shared to Instagram on Saturday, the singer claimed she “didn’t breathe” and held her core so tight her “abs hurt” as paps snapped her in a bikini from all angles.

“I’ve felt super vulnerable and unprepared – I’ve worn bikinis that were too small and paid no mind to how I looked, then saw pictures online and comments and been so upset,” Cabello, 25, admitted in her post.

“I reminded myself when it impacted my self esteem that I was thinking the culture’s thoughts and not my own,” she continued. “A culture who has gotten so used to an image of what a ‘healthy’ woman’s body looks like that is completely not real for a lot of women.”

Cabello – who’s gearing up for the release of her third studio album, “Familia,” on April 8 – added that she’s “a single woman in her 20s in the middle of a s—t ton of [album] promo,” who just wanted to “look ‘good.’”

“Today I got a new bikini, a whole f–kin cute outfit, put lip gloss on, and didn’t eat anything too heavy before going in the OCEAN cause I knew it was gonna be basically a whole photoshoot,” she explained, referencing her animal print two-piece.

“I held my core so tight my abs hurt and didn’t breathe and barely smiled and was so self conscious of where the paps were the whole time i couldn’t let go and relax and do what we’re meant to do when we go out into nature.”

The former “Fifth Harmony” songstress concluded her message by telling fans that her goal was to “get back to feeling like 7 year old me on the beach” who was “happy, silly, breathing, pretending to be a mermaid, FREE.”

She added, “I’ve never had a worse time at the beach. I’m not yet at the point in my journey where I can not give a f—k.”

Cabello’s famous friends were quick to jump into the comments section with words of love and support.

“Ur a f—ing queen and are perfect,” fellow singer Kesha, 35, wrote. “I also relate my love ❤️ the patriarchy wins when we starve ourselves… and for who? NAH. Thank u for the honesty💕💕.”

“Emily In Paris” actress Lily Collins echoed that sentiment, writing, “I feel you and am sending all the love and positive vibes your way ❤️❤️.”

Meanwhile, Paris Hilton admitted that the post “made [her] cry.”

“Thank you for writing this, so important for people to hear,” she added. “You are beautiful inside and out🥰.”

The “Señorita” songstress is no stranger to sharing her struggles with body image. Last summer, Cabello took to TikTok, sharing a clip titled, “i luv my body.”

“Being at war with your body is so last season,” she declared, telling fans she was embracing her curves despite being body-shamed while out for a run.