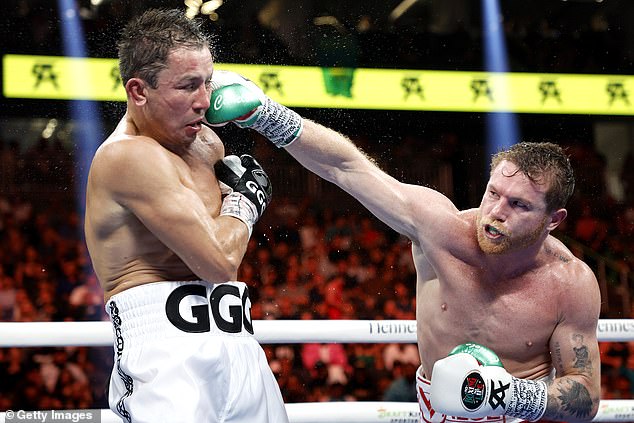 By Matt Davies For Mailonline and Kate Mcgreavy For Dailymail.Com

Canelo Alvarez revealed he will require an operation on his left hand immediately after beating fierce rival Gennady Golovkin via unanimous decision in their trilogy bout in Las Vegas.

Four years after their most recent meeting ended in a narrow, disputed victory for Alvarez (58-2-2, 39 KOs), the four-division world champion left little doubt about this verdict.

The judges all scored it surprisingly closely for Alvarez: 116-112, 115-113 and 115-113, largely down to a late and impressively spirited fightback from Golovkin.

Canelo, who paid his respect to his once sparring partner and more recently bitter rival in the immediate aftermath, also revealed that he was dealing with a significant injury throughout the bout.

‘He [Golovkin] is a tough fighter, but I’m glad [I won],’ Canelo said in his post-fight interview.

‘I need surgery on my hand after this. On my left hand. But I’m a good, I’m a warrior and that is why I’m here.’

Asked how much the injury impacted him during the fight, Canelo added: ‘A lot. I can’t hold a glass. It is really bad. But I am a warrior.’

An amicable relationship between the pair turned bitterly sour following their two prior encounters, which controversially ended a split-decision draw and a Canelo win, both of which Golovkin – and many others – felt he won.

Canelo also infamously failed a drugs test ahead of their 2018 rematch, which Golovkin referenced during his ring-walk with a video stating champions ‘don’t cheat’, though the Mexican insists the finding was due to eating contaminated meat.

Yet, the pair were able to put their differences to one side following the result, immediately embracing after the final bell.

Canelo also had kind words for his great rival during his post-fight interview.

Asked what he said to GGG straight after the fight, Canelo revealed: ‘Thank you so much my friend, thank you Golovkin.

‘We have given the fans three good fights, so thank you for everything!’

Golovkin too only had kind words to say about Canelo in the immediate aftermath.

‘Look at his face, look at my face, we’re both so clean because we trained well and put in a good fight as a result.’

‘Today, Canelo was better,’ he admitted shortly after. And asked whether the beef is now settled, he said: ‘Yeah, 100 per cent.’