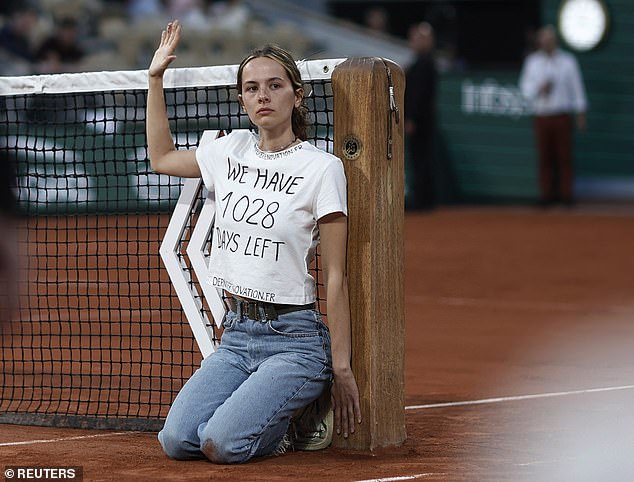 By Ben Willcocks For Mailonline

Casper Ruud and Marin Cilic’s French Open semi-final was held up by a protestor who tied herself to the net during the third set of their clash at Roland Garros on Friday night.

The players were forced to leave the court for approximately 10 minutes when a woman ran on to the Court Phillipe-Chatrier and attached herself to the side of the net.

Play was interrupted with Ruud leading 3-6, 6-4, 4-1, as security guards took up positions and the protester was removed.

Ruud later went on to win the match in four sets to book a place in the final against clay-court expert Rafael Nadal.

The woman appeared to be a climate-change protestor and sported a T-shirt bearing the phrase ‘we have 1028 days left’.

She is believed to belong to a group of campaigners who oppose France’s ‘inaction’ towards climate change.

Her invasion of Court Phillipe-Chatrier during the third set was entirely unchallenged as she fastened herself to the net, casting doubt over the security at Roland Garros.

Tournament director Amelie Mauresmo witnessed the players exit the court for 10 minutes while the woman was detached.

The incident followed the first-semi final between Alexander Zverev and Nadal, which saw the Spaniard win by default as Zverev suffered a serious injury and was forced to retire.

It’s not the first time a sporting event has been delayed by an individual tying themselves to an object within an arena.

Back in March, a protester brought Everton’s game against Newcastle to a halt after tying himself to a post

Back in March, Everton’s game against Newcastle was briefly halted for around seven minutes after a fan ran onto the pitch and attached himseld to a goalpost wearing a t-shirt saying ‘just stop oil’.

They wrote: ‘Today, a young supporter of Just Stop Oil ran onto the pitch during the Everton vs Newcastle game to draw attention to the group’s demand that the Government must end all new fossil fuel supply projects.

‘Louis, 21, locked on to the goalpost at Goodison Park wearing a Just Stop Oil t-shirt, causing the referee to briefly stop play.’

In the same month,  a different male wearing a similar top attempted to attach himself to one of the posts during Arsenal’s clash against Liverpool at the Emirates.

On that occasion, the ground staff were able to prevent the incident from escalating.