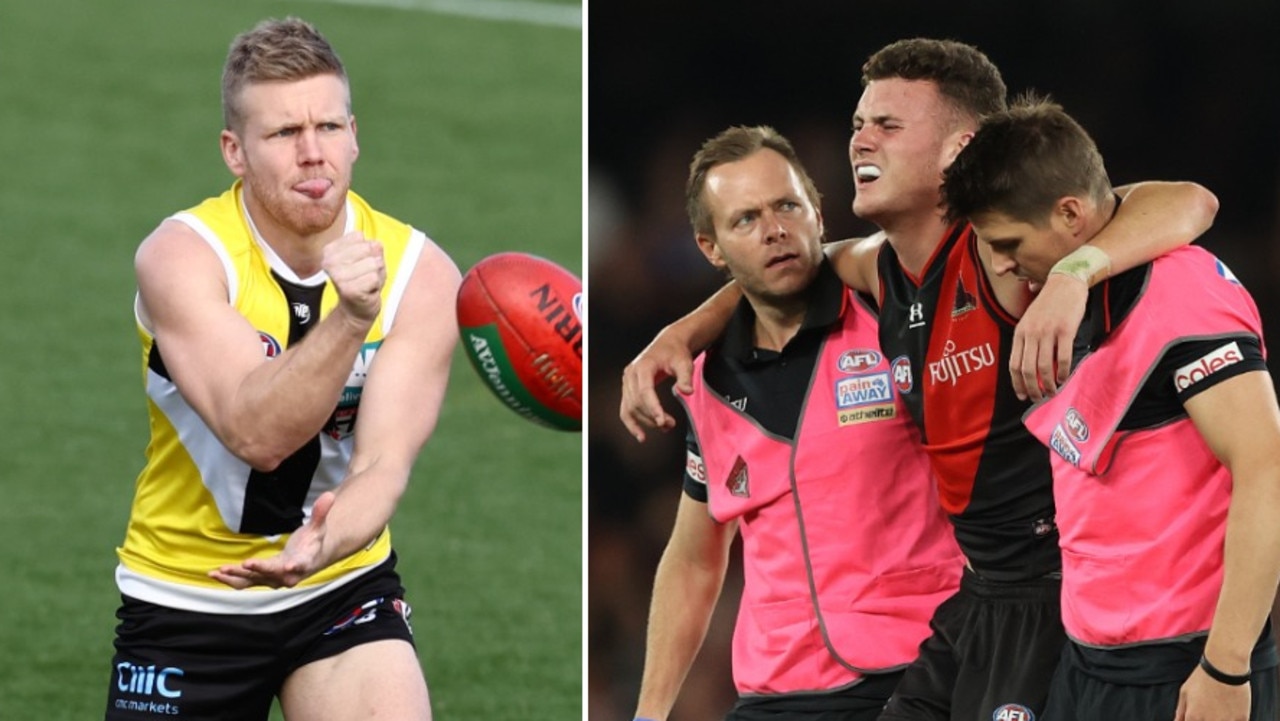 Saint Dan Hannebery’s awful run with injury has continued, with the midfielder injuring his calf at training on Saturday.

And Essendon are sweating on scans after two players left Marvel Stadium on crutches following the loss to Brisbane.

Get all the Round 2 injury news in Casualty Ward.

Stream every match of every round of the 2022 Toyota AFL Premiership Season Live & Ad-Break Free In-Play on Kayo. New to Kayo? Try 14-Days Free Now

St Kilda have confirmed Dan Hannebery’s return to footy has no time frame after the 31-year-old injured his right calf at training on Saturday morning.

Hannebery didn’t feature in any of the Saints’ pre-season clashes or Round 1, but had been pushing for a return.

The club said it was a “disappointing start” to the season for Hannebery.

“While this isn’t ideal, we know Dan will approach this next phase of rehabilitation with complete professionalism,” Saints footy boss David Rath said.

“Our medical team are working through those next steps with Dan, but our primary focus at this moment is on supporting him through this.”

The Bombers will be sweating on scans for Zach Merrett and Nik Cox after the duo were injured in the loss to Brisbane on Saturday.

Both players finished the game on crutches, with Cox rolling his ankle and Merrett injuring his lower leg.

Rory Sloane remains in doubt for Adelaide’s Showdown clash with Port Adelaide after experiencing adductor tightness in the loss to Collingwood.

“It’s a six-day break we’re on, and it’s some soreness through his adductor, I believe,” coach Matthew Nicks said.

“He tried to push on, he’s a soldier, he was just working right throughout that third, and in the end, it was just getting worse and worse for him. So we had no choice in the end. Fingers crossed he pulls up well.”

Collingwood will send new recruit Nathan Krueger for scans after the forward injured his shoulder against Adelaide.

“It’s probably a little bit early to tell (the severity). He’s going to have to get a scan, but I think he might have subluxed his shoulder,” Pies coach Craig McRae said.

Taylor Adams finished on the bench, but McRae said the midfielder was suffering from a migraine. Mason Cox remains a “watch and see” for Round 3.

Hawthorn veteran Chad Wingard is likely to miss a few weeks after injuring his hamstring in the big win over Port Adelaide. Wingard was subbed out of the game at half-time.

Trent McKenzie’s unlucky start to the season has continued with the Port Adelaide defender subbed out in the loss to Hawthorn.

Just a week after leaving the Gabba on a stretcher with a suspected knee injury, McKenzie injured his ankle and was replaced in the third term.

Richmond have lost another big name for the clash with GWS, with co-captain Dylan Grimes a late out.

Hayden Crozier has rejoined his teammates at Western Bulldogs training, despite fainting during the game on Thursday night.

Crozier sent shockwaves through the AFL community when he was pictured connected to an ECG machine in the rooms. But the 28-year-old took to social media to tell fans he was feeling “really good”.

The Gold Coast hope to regain Izak Rankine for Round 3, after the forward was a late withdrawal against Melbourne.

“We missed him, so it would have been good to see him out there,” coach Stuart Dew said.

“We’ll look to get him on the park this week.”

The Blues are set to welcome back Jack Martin and Adam Cerra after both were sidelined under the AFL’s health and safety protocols for Round 2.