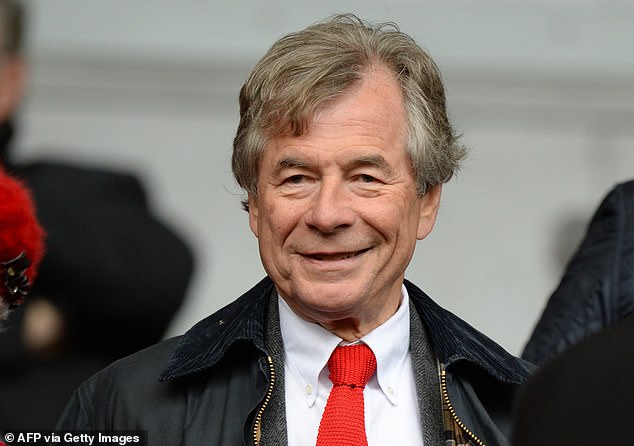 Rival bidders Sir Martin Broughton and Nick Candy have made their pitches to win over Chelsea supporters following their respective bids to buy the club.

Former British Airways chairman Broughton and British property tycoon Candy are two of the front runners to take over the club after Roman Abramovich was sanctioned at the start of March.

And with the Blues closing bids on the club at 9pm on Friday, the respective bidders have made their pledges to the Chelsea fans ahead of a potential takeover.

Sir Martin Broughton has vowed Chelsea would never again face another fight for their future should he win the battle to buy the Stamford Bridge club.

Amid a proposal to put fans at the centre of club decision-making, Broughton pledged to stop Chelsea ever suffering again from geopolitical shifts.

‘The plan will guarantee that the club is never beholden to a single individual or sovereign wealth fund, ensuring that the club never faces a crisis like this again,’ read a statement outlining Broughton’s plans.

Broughton acted as Liverpool chairman in 2010 to oversee the Reds’ sale to current owners the Fenway Sports Group, who have ushered in sustained success at Anfield.

The former British American Tobacco chairman worked with state-owned bank RBS Group on that takeover, leaving him as the sole person with UK experience of working with Government on a football takeover.

That prior experience could bolster his candidacy for Chelsea, while double Olympic gold winner Coe’s sports business and politics acumen is a genuine coup.

‘I am assembling a team that will ensure the future success and financial stability of a club I’ve supported for more than 60 years,’ Sir Martin commented.

‘We will secure a prompt purchase and smooth transition, with funds readily available for the immediate takeover of the club and immediate investment in the team, facilities, and commercial opportunities.

‘I believe I am the right person to lead Chelsea Football Club as we start this new chapter for the club.

‘I have a track record of success in boardrooms throughout my career and I have done this before. I remain the only person to have effected a change of ownership at a major football club in a similar situation, which I did at Liverpool 12 years ago.

‘But most importantly, as a lifelong fan, I am committed to ensuring Chelsea maintains its pre-eminent position at the top of European football and making sure we put fans first.’

Broughton’s statement insisted his consortium has the wherewithal to complete a quick takeover of Chelsea, which will be vital to put the club back onto a normal operational footing.

Pledging an ‘immediate commitment to invest’ in players, facilities and commercial opportunities, the statement also insisted on: ‘Moving quickly to resume all normal operations at the club, avoid catastrophic delays, and protect fans, employees, players and sponsors.’

Broughton’s competitor, Nick Candy, has pledged to ‘give football back to the fans’ should he pull off his bid of more than £2billion to buy Chelsea.

The British property tycoon vowed to hand Chelsea fans the coveted ‘golden share’ ownership stake in the Stamford Bridge club on submitting his bid to buy the Blues on Friday night.

Chelsea fan Candy issued a lengthy statement in confirming the submission of his bid, vowing to write off the loan to Chelsea Pitch Owners to safeguard the Blues’ future at Stamford Bridge.

The 49-year-old has promised a total renovation of the stadium, where his property expertise could come to the fore.

‘Chelsea is one of the most iconic and successful professional football clubs in the world, with a rich heritage, global following, and a highly valuable brand,’ said Candy.

‘Football clubs are vitally important community and cultural assets, and this is a once-in-a-lifetime opportunity to give football back to the fans and put them at the heart of the operations and strategy of a leading global football club.

‘I believe Chelsea has all of the fundamentals to become the most valuable and respected sports club in the world and a force for the greater good in everything it does.’

This would mean a pledge to avoid any future worries like last year’s failed formation of a European Super League.

‘Under this consortium’s leadership, Chelsea will set the gold standard for management of a community linked professional football club,’ read a statement from the Blue Football Consortium.

‘In doing so, it will be guided by the best practice recommendations for improving governance, ownership and financial sustainability of football clubs as set out in the independent Fan-Led Review into Football Governance by Tracy Crouch MP, and work to promote community involvement and grass roots infrastructure.

‘As part of its commitment to fan-centre stewardship, the consortium will guarantee that Chelsea will not exit any existing sporting structures without the engagement of key stakeholders, including fans at the forefront.’

Roman Abramovich put Chelsea up for sale on March 2, amid Russia’s invasion of Ukraine.