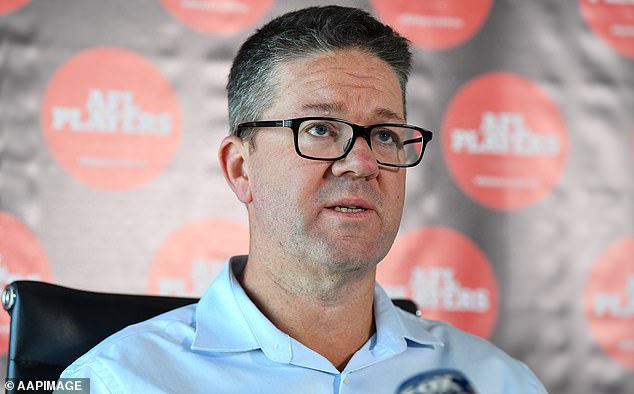 Insane 2am finishes leave AFLW players so exhausted they risk DEATH by falling asleep behind the wheel on the way home, players association boss warns

The CEO of the AFL Players Association has warned some AFLW players are risking their lives as they’re left to drive home exhausted from games as late as 2am.

Speaking on the ABC podcast ‘The W with Sharni and Sam’ on Monday, Paul Marsh made the concerning revelation to co-hosts Sharni Norder and Samantha Lane.

It comes as calls increase for the AFLW competition to become fulltime like the AFL.

Responding to a statement from Norder and Lane that many female athletes are ‘as tired as ever’, Marsh – the son of cricket legend Rod, who died on March 4 – said he had heard reports of some players having to pull over on freeways due to fatigue when behind the wheel.

‘It is clearly too much to expect players in the AFLW to combine life as a (part-time) athlete with work,’ Marsh said.

Paul Marsh, the CEO of the AFL Players Association, has warned some AFLW players are risking their lives as they drive home exhausted following matches

Erin Phillips of the Adelaide Crows kicks against Brisbane. Some AFLW players have had to pull over on freeways for fear of falling asleep after being left exhausted by their schedules

There are currently 14 teams in the AFL competition, after eight competed in the inaugural season back in 2017.

Plans are in place for all 18 AFL clubs to eventually be represented – but that won’t happen before 2026.

Marsh said it is vital that the code continues to expand, and that the players become recognised as fulltime athletes, reflected through minimum 12-month professional contracts.

‘The players are looking for certainty to map out their lives,’ he said.

‘There also needs to be a better roadmap from the AFL…investing in the product is a must.’

Marsh went onto state he is aware the process won’t happen overnight, but continual growth is vital.

This would be best reflected through investing in grassroots girls AFL as well as establishing a second-tier AFLW competition to provide a legitimate pathway for emerging talent.

If not, future stars of the game will be lost to other sports.

In a win for footy fans, both venues will be free to enter.

The winners will then meet in the women’s grand final on April 9.