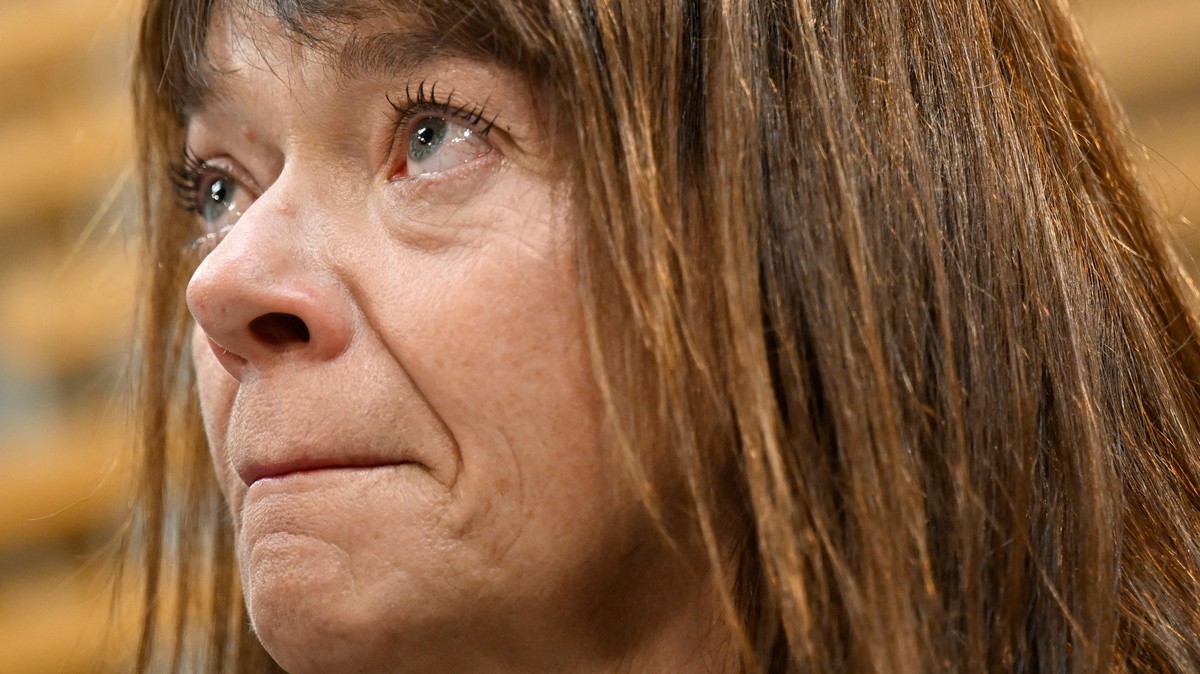 Sally Glass, mother of Christian Glass who was killed by a Clear Creek County deputy June 11, speaks to the media at her attorneys office on September 13, 2022 in Denver, Colorado. (Photo by RJ Sangosti/MediaNews Group / The Denver Post via Getty Images)

The officer who shot and killed a 911 caller who got his vehicle stuck in Colorado was back on the street patrolling less than two days after killing the young man, according to his family.

On June 11, 22-year-old Christian Glass called 911 after getting his vehicle stuck on a rural road in Clear Creek County, Colorado. “You’re my light right now. I’m really scared. I’m sorry,” he told dispatchers.Just over an hour after police arrived on the scene though, the young man was lying dead on the ground after being shot six times, body camera footage released this week shows.

Officers later explained that they feared Glass would stab them. But he repeatedly told the 911 dispatcher that he had two knives and a rubber hammer—tools for his amateur geologist hobby—with him and that while he was feeling paranoid he wasn’t dangerous. Glass’ parents said their son was clearly in the midst of a mental health crisis.

Still, none of the officers involved in the June 11 shooting faced any sort of serious punishment, according to lawyers representing Glass’ family. In fact, the one who shot Glass, Clear Creek County Sheriff’s Deputy Andrew Buen, was allegedly back on duty June 13.

“To our knowledge, none of the officers involved have been disciplined and all of the officers are back on the street in uniform,” Siddhartha Rathod, one of the Glass family’s lawyers, told VICE News. “This is a large part as to why Simon and Sally Glass have come out publicly.”

At a press conference earlier this week, Christian Glass’ parents told reporters about how loving, kind, and polite their son was. They expressed shock at how law enforcement handled both the killing and the aftermath.

“The people involved in this crime must be held accountable for our family and for the peace of mind of hundreds of thousands of parents in Colorado,” Simon Glass, his father, said.

“They should be protecting us, not attacking us,” his mother Sally Glass added. “Police need to know that if they act criminally they will face charges and punishment just like the rest of us.”

“What keeps me upright and what keeps me putting one foot in front of the other is to seek justice and really to get that asshole behind bars,” she said.

Clear Creek County Sheriff Rick Albers didn’t respond to questions regarding the killing nor when or if Deputy Beun was put back on patrol.

“The unspeakable loss and grief Sally and Simon Glass are living is the worst nightmare of every parent,” Polis said in a statement. “This tragedy should never have happened. Colorado mourns for the loss of Christian Glass’s life.”

Glass’ parents said that during the almost one-hour confrontation with police Glass, he was just too frightened to leave his vehicle. To prove this, the Glass family lawyers released several angles of body camera footage showing the killing.

Shortly after police arrive, Glass offers to throw his weapons out the window but is told not to do so by the officer who eventually kills him. Glass is repeatedly told to leave the vehicle—which his parents said he does not because was frozen from fear. (You can read a detailed breakdown of the disturbing scene here.)

More police arrive on the scene and, after one of the leading officers decides it’s time “for the night to move on,” they increase their tactics. As they break the passenger-side window, Glass grabs a knife.

In a recent interview, Clear Creek County Undersheriff Bruce Snelling told Colorado Public Radio that Deputy Buen told Glass to drop his weapon more than 35 times and believed Glass was reaching through a back window to attempt to stab an officer standing there.

Ultimately, law enforcement ended up tasing Glass and shooting him multiple times with a beanbag. As he’s flailing around and screaming, Deputy Buen shoots him dead.

“I know this ongoing criminal investigation,” said Sally Glass. “Yet within a few days of Christian’s murder, they actually put [Buen] back out. Back out in full force with a gun in his pocket. It’s disgusting.”