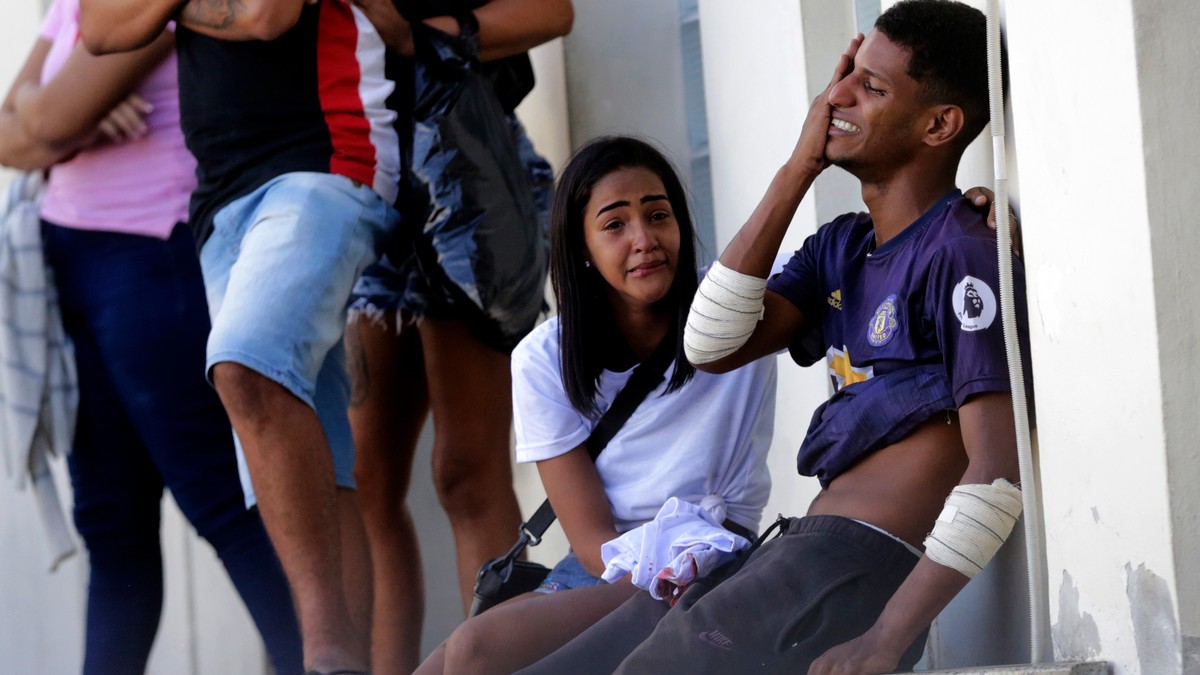 An injured man cries after being treated for his injuries after a police raid on the Vila Cruzeiro favela in Rio de Janeiro, Brazil, Tuesday, May 24, 2022. Photo: AP Photo/Bruna Prado)

Law enforcement reportedly entered the area around Vila Cruzeiro favela early May 24 in an operation aimed at capturing leaders of one of the city’s largest criminal organizations — the Comando Vermelho, or Red Command. At least 25 died in the ensuing firefight, including a 41-year-old woman hit by a stray bullet.

The incident comes as Rio’s authorities have come under increased scrutiny for alleged abuses of authority and extrajudicial killings.

Authorities initially downplayed the day’s events, but the death toll has continued to rise over the course of Tuesday and Wednesday as both wounded people and others already dead continued to arrive at local hospitals.

The exact details of the operation are still unclear, but police have claimed in statements and interviews with local media that they were attempting to intercept gang members outside  the neighborhood when they came under fire. Varying accounts reported hearing gunshots in the favela over the course of many hours afterwards.

A video spreading on social media appears to show police shooting at locals who began protesting during the hours-long operation.

The raid came just over a year after another lethal police operation in the Jacarezinho favela where 28 people died, with allegations of extradjudicial murders. That incident, along with other questionable police operations in the city’s favelas, led to a Supreme Court ruling that created new conditions for law enforcement operations, establishing that lethal force could only be used as a last resort to protect one’s life. The court also gave authorities 180 days to install recording devices on their uniforms and vehicles to monitor their operations. It’s unclear if the officers involved in Tuesday’s raid already had the devices installed.

Rio state public prosecutors announced that they had opened a criminal investigation in this week’s police raid, according to the Associated Press, and gave police 10 days to clarify what happened, including which officers caused each death and if it justified using lethal force as designated by the recent Supreme Court ruling.

Police claimed that leaders of the Red Command were hiding in the favela. The Red Command were reportedly founded in a Brazil prison in the 1970s before expanding outside the penitentiary walls. The gang is now involved in everything from drug trafficking to bank robberies. It is unclear whether any Red Command leaders were killed or arrested in the operation.

But while the raid has come under immediate scrutiny by the media and human rights organizations, Brazilian President Jair Bolsonaro took to Twitter to congratulate authorities, calling them ”warriors…who neutralized at least 20 criminals linked to drug trafficking.”

Bolsonaro is well known for his hardline stance towards crime which has led to an increase in police abuse during his presidency.