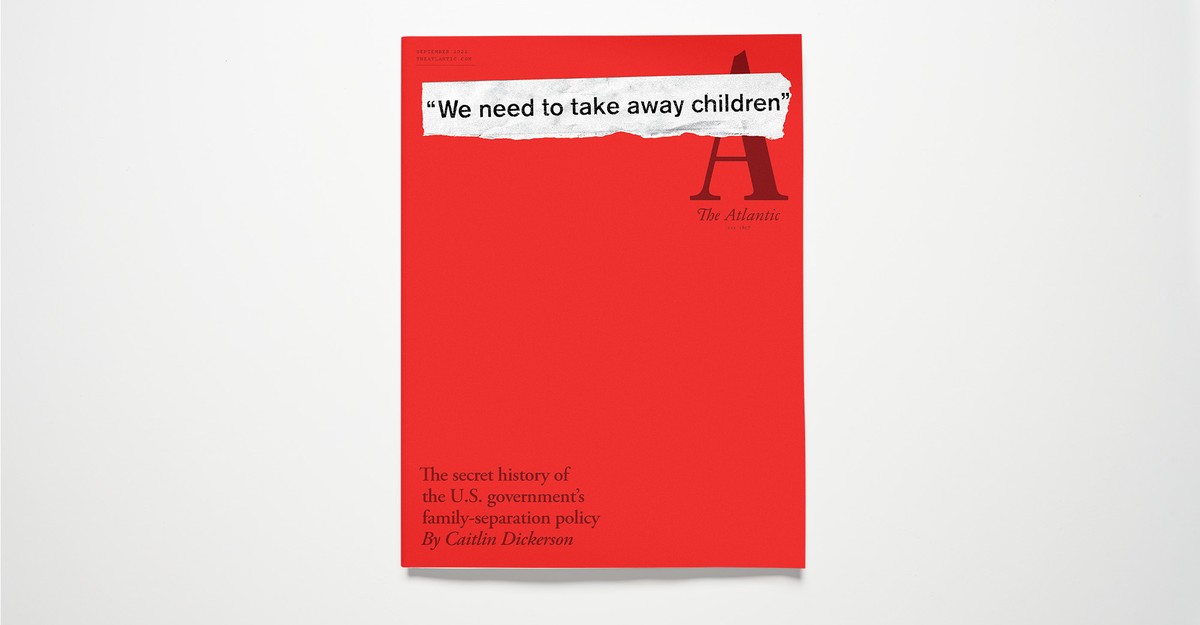 In an extensive investigation that is the cover story of The Atlantic’s September 2022 issue, staff writer Caitlin Dickerson provides the definitive account of the Trump administration’s family-separation policy, called Zero Tolerance: She lays out in painstaking detail one of the darkest chapters in recent U.S. history, exposing not only how the policy came into being and who was responsible for it, but also how all of its worst outcomes were anticipated and ignored by key policy makers. Dickerson’s reporting shows that the policy was characterized by gross negligence at every level of government.

Her reporting also reveals that U.S. officials misled Congress, the public, and the press, and minimized the policy’s implications to obscure what they were doing; that separating immigrant children from their parents was not a side effect of the policy, but its intent; that almost no logistical planning took place before the policy was initiated; that instead of working to reunify families after parents were prosecuted, officials worked to keep families apart longer; and that the architects of the legislation will likely seek to reinstate it, should they get the opportunity. The investigation, “We Need To Take Away Children,” is online now in English and Spanish.

The story, at nearly 30,000 words, is one of the longest The Atlantic has published in its 165-year history. Over 18 months, Dickerson conducted more than 150 interviews––including the first extensive on-the-record interviews on this subject with Kirstjen Nielsen, John Kelly, Scott Lloyd, and others intimately involved in the policy and its consequences at every level of government––and reviewed thousands of pages of internal government documents, some of which were turned over only after a multiyear lawsuit.

“It’s been said of other Trump-era projects that the administration’s incompetence mitigated its malevolence; here, the opposite happened,” Dickerson writes. “A flagrant failure to prepare meant that courts, detention centers, and children’s shelters became dangerously overwhelmed; that parents and children were lost to each other, sometimes many states apart; that four years later, some families are still separated—and that even many of those who have been reunited have suffered irreparable harm.

“It is easy to pin culpability for family separations on the anti-immigration officials for which the Trump administration is known. But these separations were also endorsed and enabled by dozens of members of the government’s middle and upper management: Cabinet secretaries, commissioners, chiefs, and deputies who, for various reasons, didn’t voice concern even when they should have seen catastrophe looming; who trusted ‘the system’ to stop the worst from happening; … who assumed that someone else, in some other department, must be on top of the problem; who were so many layers of abstraction away from the reality of screaming children being pulled out of their parent’s arms that they could hide from the human consequences of what they were doing.”

Despite the widespread denunciations of the policy, and its disavowal by many establishment Republicans, The Atlantic’s investigation makes clear that if Donald Trump or someone who shares his views on immigration were to be elected in 2024, restarting family separations would likely be high on the agenda.

Among the revelations and new details from Dickerson’s reporting and interviews:

– Documents show that all that went wrong with the family-separation policy, known as Zero Tolerance––including infants being separated from their parents, loss of parents and children in the federal detention system, and prolonged separations, some of which continue even today––was anticipated in internal government reports in advance of the policy being implemented. These reports include recommendations that would have helped avoid such negative outcomes–but the proposals were rejected or ignored.

– A never-before-seen internal Border Patrol report produced at the conclusion of a pilot program for Zero Tolerance in El Paso, Texas, uses variations on the phrase family separation more than 10 times––despite government officials’ later claim that their only goal was to prosecute parents, not separate them from their children. The report acknowledges that children who could not be reunified with their parents might end up in long-term foster care or be sent back alone to their country of origin.

– While it was known that immigration hawks such as Stephen Miller advocated for harsh enforcement policies like Zero Tolerance, documents and interviews show that then–Secretary of the Department of Homeland Security Kirstjen Nielsen opposed family separation and for months stood in its path, often as the lone person in the room voicing objections. Nielsen faced intense pressure from the agency’s bureaucratic leadership to sign off on Zero Tolerance. DHS officials underplayed the significance of what they were asking her to do, and falsely suggested that systems had long been in place to ensure that the policy would be implemented smoothly––which was not true.

– Further, Dickerson reports that Nielsen and other senior staff were told, and incorrectly believed, that Border Patrol agents had routinely separated immigrant families under previous administrations. Dickerson writes: “Some of them told me they remembered hearing certain statistics—that 10 or 15 percent of parents had been referred for prosecution in the past. Others said that the details were never clear, or that the White House or Justice Department would claim it didn’t keep data on that. These officials said they believed that the idea Nielsen was debating was nothing new. ‘It just seemed like a nonissue that I shouldn’t spend any time on,’ May Davis, who held various roles in the Trump White House, recalled. When I would tell these officials, including Nielsen, that parents traveling with a child had rarely been prosecuted in the past, they sounded shocked.”

– DHS officials worked to keep parents and children apart for extended periods of time, lamenting when reunifications happened too quickly. Within days of the start of Zero Tolerance, a deputy at ICE expressed concern that if the parents’ prosecutions happened too swiftly, their children would still be waiting to be picked up by HHS in Border Patrol stations, making family reunification possible. He saw this as a bad thing. “We can’t have this,” he wrote to colleagues, underscoring that reunification “obviously undermines the entire effort.” Dickerson reports that the deputy suggested that the Border Patrol deliver separated children from DHS to HHS at an accelerated pace, to minimize the chance that they would be returned to their parents. “Confirm that the expectation is that we are NOT to reunite the families and release” them, he wrote.

– Documents and interviews detail how Jonathan White, an HHS social worker, helped lead a months-long internal effort to head off family separations, in part by repeatedly highlighting that the federal detention system was not equipped to handle them. White’s efforts were ignored by members of agency leadership, including his politically appointed boss, Scott Lloyd, who now say they were predisposed to believe those in law enforcement who claimed that families were not being separated, or who were simply not paying attention to the agency’s immigration portfolio because they were focused on other issues.

– Kirstjen Nielsen, DHS secretary during Zero Tolerance and the face of family separations carried out under Trump. Nielsen says that she regrets the decision to sign family separation into existence: “Frankly,” she tells Dickerson, “I wish I hadn’t.”

– Tom Homan, whom Dickerson identifies as the intellectual father of the idea to separate families, explains how he came up with the idea and why he still believes in it today. He states explicitly that the separations, not just the prosecutions, were meant to serve as deterrents. “Most parents don’t want to be separated,” Homan told Dickerson. “I’d be lying to you if I didn’t think that would have an effect.”

– Neris González, a Salvadoran consular employee, who witnessed hundreds of separations and describes harrowing, firsthand scenes of what occurred. She is one of the only witnesses to detail family separations in the press.

– Rich Hunter, a 30-year veteran of the U.S. Marshals Service and, at the time of Zero Tolerance, the agency’s second-highest-ranking official in South Texas. Hunter was alerted to Zero Tolerance only when someone at the DOJ tipped his agency off. Hunter told Dickerson: “I could see the impact headed down the tracks straight at us, and no one had talked to us. No one had prepared us for this. No one had asked us, ‘Do you have space for this? Do you have resources, manpower?’”

– Ryan Patrick, one of a handful of U.S. attorneys overseeing Zero Tolerance cases, who says that when he sought information from DHS about where separated children were being sent, and how and when families would be reunited, “Emails would go either unanswered, calls would go unreturned, or ‘We’re not answering that question right now.’”

“We Need to Take Away Children” is the cover story of The Atlantic’s September 2022 issue. Also writing for the issue are editorial fellow Bushra Seddique, who documents her recent escape out of Afghanistan; staff writers Kaitlyn Tiffany on labeling people “toxic” and Sophie Gilbert on romance novels with radical ambitions; Xochitl Gonzalez, who writes the Brooklyn, Everywhere newsletter, about gentrification removing noise from the city; and Cynthia Ozick, on her correspondence with a German soldier during World War II.