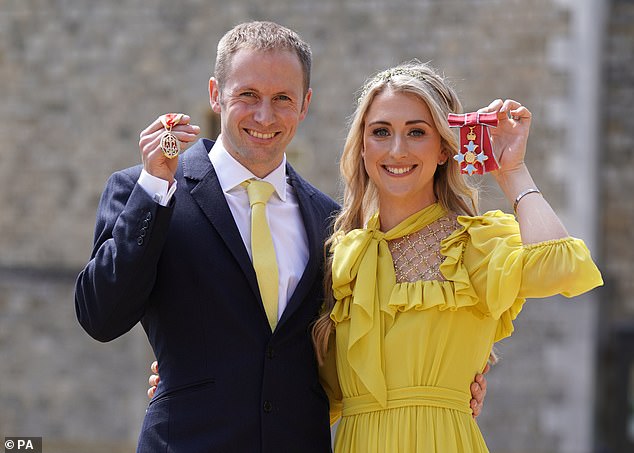 Olympic cycling legends Laura and Jason Kenny were among a host of current and former Team GB sports stars who received honours at Windsor Castle on Tuesday.

Sir Jason and Dame Laura collected their awards in person on Tuesday after he was knighted and she was made a dame in the Queen‘s New Year’s Honours list.

The married couple, who have won 12 Olympic gold medals between them, were given the titles for services to cycling.

An investiture is the day when someone who has been awarded an honour receives it in person from the Queen or a member of her family at a royal residence.

Laura, meanwhile is Britain’s most decorated female cyclist – with five gold medals and one silver medal in her collection since her first appeared at London 2012.

The positive news for the pair comes after they dealt with the tragedy of suffering a miscarriage last year – and then had an eptopic pregnancy in January, which is when a fertilised egg implants itself outside of the womb.

‘Since the Olympics we haven’t had much luck and it’s been the hardest few months I’ve ever had to go through,’ Laura wrote on Instagram.

‘Jason and I fell pregnant immediately after the Games and we were absolutely chuffed to bits. But unfortunately in November when commentating at the track champions league I miscarried our baby at 9 weeks. I’ve never felt so lost and sad. It felt like a part of me had been torn away.

‘I grabbed for my safety blanket, bike riding! I found myself back in my happy place training again. I then caught Covid in mid-January and found myself feeling really very unwell.

‘I didn’t have typical covid symptoms and I just felt I needed to go to hospital. A day later I found myself in A&E being rushed to theatre because I was having an ectopic pregnancy. Scared doesn’t even come close. I lost a fallopian tube that day.’

Dawson and her team, including Adam Peaty, won gold for 4x100m mixed medley relay at the 2020 Tokyo Olympics, in a world record time of 3min 37.58sec.

Yee and his teammates won gold at the triathlon mixed relay at Tokyo 2020 and he also won silver in the solo men’s triathlon at the same Olympics.

Middleton was England and Team GB’s most-capped player when he announced his retirement from international hockey in April 2019.

He played 432 games for England and Team GB during his 16-year career, scoring 119 goals.