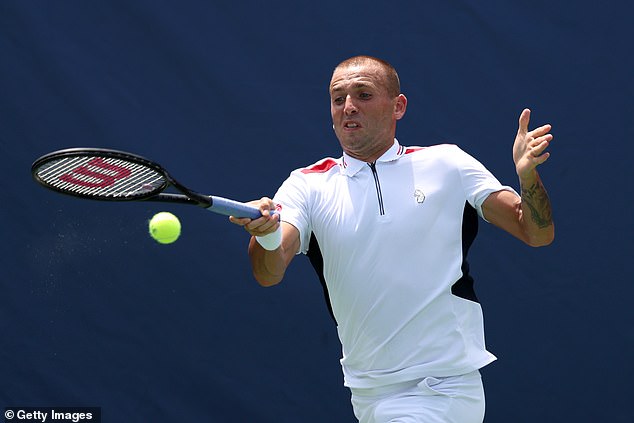 Dan Evans secured his place in the third round at the Citi Open with a straight-sets victory over fellow Briton Kyle Edmund.

The 32-year-old 16th seed made short work of dispensing with an opponent working his way back from a lengthy injury lay-off to win 6-1 6-2 in a little more than an hour in Washington.

He will now face either America’s Taylor Fritz or Australian Alexei Popyrin in the next round while Edmund reflects on his return to singles action after 20 months out following three knee operations.

Speaking on court afterwards, Evans said: ‘My focus was very good. I had a bit of a blip at the end, but I thought I didn’t do much wrong. He hit, I think, three winners.

‘I’m just really happy to be going still. It’s always nice to start a new swing off with a win and it’s nice to be through to the third round.’

Evans took just 22 minutes to claim the first set for the loss of a single game as he capitalised on a series of errors by a rusty Edmund.

He broke to 15 in the opening game and repeated the feat in the fifth and seventh, with unforced errors costing the former British number one dearly.

Edmund, 27, held serve with an ace to level the second set at 1-1, but again errors proved costly as Evans raced into a 4-1 lead with a near-faultless display.

He broke again to serve for the match as Edmund’s first serve deserted him, but was pegged back immediately after his opponent produced a fine forehand return and then an exquisite drop-shot to earn his chance.

However, the respite proved temporary with Evans clinching victory in 62 minutes at the second time of asking.