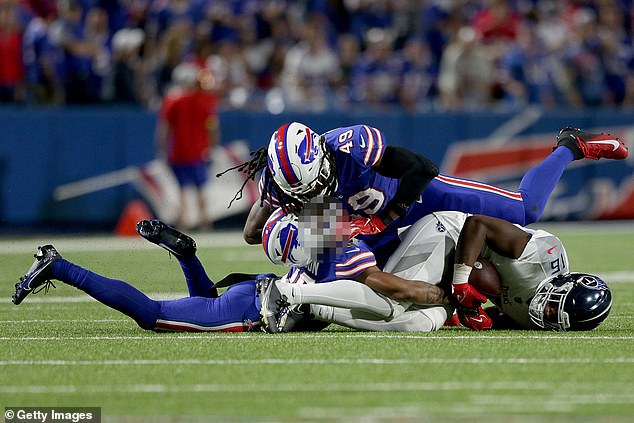 By Patrick Djordjevic For Dailymail.Com

Buffalo Bills cornerback Dane Jackson’s head and neck bent back in a scary collision with a teammate, but the team soon reported he had full movement in his extremities.

Following the worrying collision, an ambulance promptly arrived on the field before he was driven away to Ernie County Medical Center in Buffalo.

The Bills confirmed Jackson had full movement in his limbs and was getting a CT scan and an X-ray at Erie County Medical Center.

Jackson was hurt on a second-down play with 0:45 left in the first half against the Tennessee Titans after tackling receiver Treylon Burks from behind.

Coach Sean McDermott gave an update on Jackson following the Monday night game, he said: ‘Dane Jackson has full movement in his extremities, which is good, but we are still awaiting more updates.

‘I was able to see him in the ambulance at halftime and we are all sending our prayers to him.’

As Jackson lay on Burks’ back, linebacker Tremaine Edmunds dived in late and struck his teammate directly in the helmet as Jackson’s neck and head were sickeningly bent backward.

The Bills player’s head was pushed by Titans running back, Hassan Haskins, as he attempted to move Jackson out of the way of his teammate.

Footage emerged of Haskins rolling Jackson over while he was laid out on the field.

One Twitter user said: ‘Uh, wtf is Hassan Haskins doing?? He rolls Dane Jackson over when Jackson is injured on the ground. Inexcusable.’

Another added: ‘Never seen an injured player get pushed aside by the other team. Dirty,’ with one commenting: ‘A**hole play from Hassan Haskins, shoving Jackson while he’s injured. Intent or not it’s stupid.’

One more wrote on social media: ‘Zero excuse for that. Micah Hyde noticed and called Hassan Haskins out for it.’

Trainers rushed to Jackson’s aid before he was put on a stretcher and into the ambulance.

Teammates surrounded the 25-year-old until he was taken off the field as play was delayed for around 10 minutes.

Bills fans were seen shook in the stands while social media users were praying for good news straight after the horrible incident.

As the Pennsylvania native left the field, Buffalo led 17-7 over their AFC South opponents. His team went on to win 41-7.

Jackson, in this third-year as an NFL player, was starting in place of the injured Tre’Davious White, who is currently rehabbing a left knee injury.

Jackson was the 239th pick in the 2020 NFL Draft and played college football for ACC school, Pittsburgh.

Jackson had made a promising start to the season, picking off Matthew Stafford in the opener