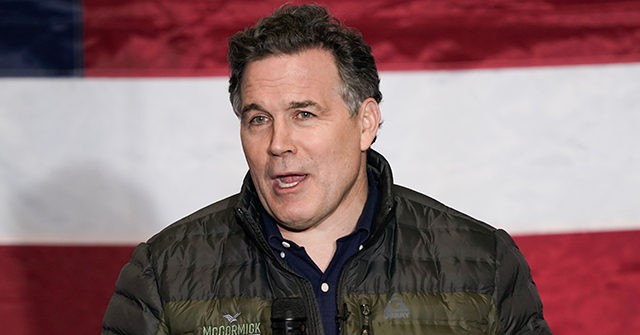 Dave McCormick, a Republican candidate for U.S. Senate, requested a hand recount in 12 Pennsylvania counties in the state’s primary election on Tuesday.

McCormick’s request for a hand recount comes as he reportedly trails celebrity doctor Mehmet Oz by less than 1,000 votes out of the more than 1.3 million cast by Pennsylvania Republicans.

Pennsylvania counties have until June 8 to finish and submit their recount results to the Department of State.

McCormick’s plea for a hand recount in 12 counties is over the alleged “15-20 thousand vote discrepancy between the ballots cast and the ballots counted,” according to a McCormick campaign senior official.

We’re doing a recount of a count that I actually don’t know the results of… We have essentially two different sources of data. One being the counties. Two being the Department of State, with completely different [results]…

We’re going to ask today for a hand recount of 12 different counties to get a complete sense of the delta between what the counties are providing our campaign and what the Department of State [is providing]… We have between 15-20 thousand vote discrepancy between the ballots cast and the ballots counted.

McCormick’s team said the Republican businessman would pay for the hand recount and run concurrently with the mandated machine recount to avoid unnecessary delays.

“We don’t want to cause any delays. We want the Republican primary voters to know that they have a winner whether it’s by one vote or a thousand votes, so we can all get behind the nominee and beat Fetterman in the fall,” the senior campaign official said.

“There’s a list of counties and precincts where the undervote falls outside the norm… We’re asking for hand recounts in the outlier areas…. We’ve gone day after day after day with no reconciliation between the vote count and the vote tally,” the campaign official added.

However, McCormick’s request for a hand recount could be impacted by Supreme Court Justice Samuel Alito’s recent decision to pause a lower court’s ruling that allowed Pennsylvania to count undated mail-in ballots in a November 2021 Lehigh County court election.

The U.S. Court of Appeals for the Third Circuit overruled a state law that required mail-in and absentee ballots to be submitted in an envelope with a written date on May 20. The Third Circuit concluded the date requirement for those ballots is “immaterial” and ordered the state to count them. Pennsylvania’s Department of State advised counties to count undated mail-in ballots after the Third Circuit’s decision.

However, now that Alito has paused the Third Circuit’s decision, it is uncertain whether that would affect McCormick’s request to the Commonwealth Court of Pennsylvania to count mail-in ballots received by 8:00 p.m. on primary election day but were not dated.

There is no timeline for when the Supreme Court will fully hear the debate and issue a written opinion about Pennsylvania’s undated mail-in ballots.

McCormick reportedly “appeared to make progress convincing the Pennsylvania Commonwealth Court to side with his view” just hours before Alito issued his two-sentence order.

“Have you ever made a mistake when you put a date on something? I know I have. … Should that defeat a person’s ability to vote?” Cohn Jubelirer asked Oz’s attorneys in court on Tuesday.

Oz’s campaign counsel, John Gore, accused McCormick’s legal efforts of being part of a “broader effort to thwart the apparent will of Pennsylvania’s voters.”

However, McCormick has allies among Pennsylvania election officials who support counting the undated mail-in ballots.

“We think the only real answer here is that these votes should be counted. If all the voter did was leave off an irrelevant date, then we should not disenfranchise them — and that’s what we’re talking about here, disenfranchisement,” Pennsylvania Chief Deputy Attorney General Michael Fischer said.

In light of the court battle taking place at various levels of the judiciary, state election officials have advised counties to count undated mail-in ballots but keep those numbers separate from the overall vote count.

Whoever is victorious after Pennsylvania’s ballots are recounted will go on to face Pennsylvania Lieutenant Governor John Fetterman in the November general election.