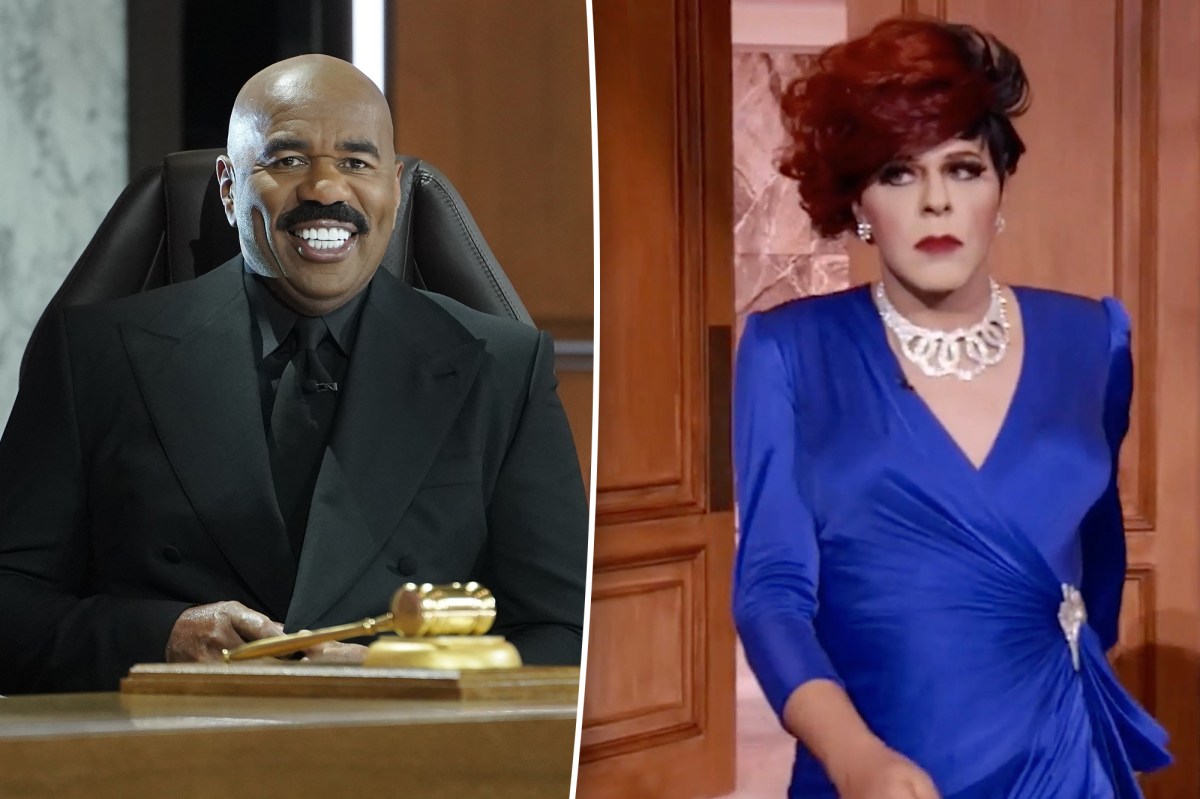 “When I walked in there, I thought that they were going to give me a Bible, that I was going to put my hand on the Bible and I was going to swear in like a real court,” the drag queen and pop artist tells Page Six in an exclusive interview.

The seasoned entertainer soon discovered that she was taking part in a case with no legal bearing as Harvey — apparently unbeknownst to some — is not a real judge and has no formal education in law.

“Steve has no business anywhere near a courtroom as a judge,” she asserts. “He’s a comedian, right?”

“I would absolutely walk back into Steve Harvey’s courtroom any day,” the TV personality says of the Atlanta-shot ABC show. “I had the best time in that courtroom … I mean, on that TV set, because that’s really what it is.”

Harvey ultimately ruled in defendant Free’s favor, but ordered that a portion of the modest $3,466.46 settlement go to Grygelko — disappointing Ibrahim, who believes the plaintiff “didn’t deserve a dime” as he, in her mind, is a “manipulative liar and backstabber.”

“Steve Harvey, as a judge, makes you laugh. I laughed so many times even though I was so mad,” Ibrahim admits. “Steve Harvey rules from his heart. His ruling was much kinder than mine would have been, so I think he’s more compassionate than maybe somebody who has to follow the law because, let’s face it, that’s not his chosen profession.”

Still, the San Francisco-based performer would encourage Harvey to pursue a career in civil law: “If the plaintiff and the defendant are willing to let common sense guide their trial, then Steve Harvey would make the best judge on this side of Heaven.”

However, if future participants step into Harvey’s courtroom thinking he has passed the bar exam, a now-enlightened Ibrahim believes they should schedule an eye exam.

“I would say that you need to go to the eye doctor and have your eyesight checked right away. There’s problems with your vision and maybe even problems with your cognitive thinking if you think that comedians should be judges,” she quips.

“But at the same time, maybe they should — because look at how entertaining and amazing the show is. And look at how many cases he’s settled so far! Things are getting done, he’s settling cases, people are moving on with their life.”

Aside from Harvey’s humor and kind disposition, Ibrahim tells Page Six that she appreciates his apparent respect for the art of drag and the LGBTQIA+ community at large.

“Steve and the entire ‘Judge Steve Harvey’ staff made sure to get our pronouns right and really created a safe space for us,” says Ibrahim, who identifies as transgender but notes that her gender identity leans towards non-binary.

The actor — who has appeared on such shows as “Will & Grace,” “Ugly Betty,” “ER” and “Criminal Minds”  — explains that “Judge Steve Harvey” was a welcome gig after years of being subjected to gender nonconforming tropes for scripted projects: prostitutes, down-on-their-luck sex workers and more stereotypical characters.

“I’ve been in the business for a long time, honey, and let me tell you, Hollywood has come a long way,” she marvels. “I look at ‘Euphoria,’ ‘Transparent’ and ‘Pose.’ We’re now seen as more than just degenerates. It’s nothing short of breathtaking and awe-inspiring. I’m so proud of our nation that we came this far.”

Adds Ibrahim, “And I’m so grateful … to say that I am a drag queen on ABC network on primetime television. I never thought I would say that sentence out loud and here I am saying it in 2022.”