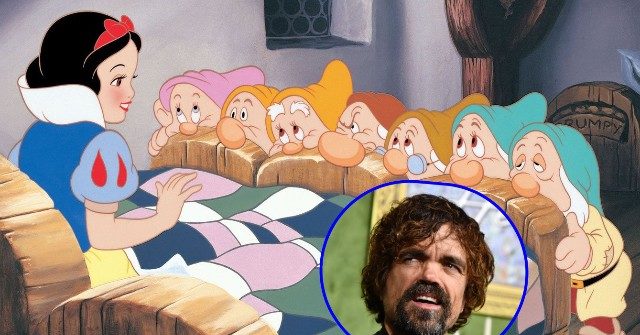 Dwarf actors are calling out Disney after the studio announced it’s rethinking the seven dwarf characters in its Snow White remake after Game of Thrones star Peter Dinklage called the story and roles “fucking backwards.”

“It’s taking jobs away from our community that are very few and far between as is,” dwarf actor Dylan Postl told Daily Mail. “When he was cast as a little person role in — Game of Thrones, he had no issue then. Now he wants to be progressive? Come on, man. It’s just so selfish of him. If that is his mindset, then man, you gotta grow up.”

Dinklage criticized Disney’s live-action remake of Snow White and the Seven Dwarfs, claiming that while they tried to be progressive by casting a Latina actress as Snow White, Disney still kept the “fucking backwards” depiction of “about seven dwarfs living in a cave together.”

“By saying they’re these cave-dwelling people — no, they lived in a cottage — he didn’t do his research,” Postl said.

After Dinklage spoke out, Disney jumped into damage-control mode, announcing, “To avoid reinforcing stereotypes from the original animated film, we are taking a different approach with these seven characters and have been consulting with members of the dwarfism community.”

“We’re in a society in a time of woke and progression, and I get that, to an extent. But this is a fairy tale about Snow White and the Seven Dwarfs, where one of the focuses is on these seven dwarfs. It’s in the title,” Postl said.

“If a dwarf dreams of being an actor, and in a Disney film, this role is made for them,” he added. “So now you’re taking these roles of, not just one, but seven little people away, because you feel like we have to make progression? It’s so stupid — you’re actually doing worse for the community than better.”

Postl went on to lament how “one person speaks up in ‘cancel culture’ or ‘woke nation,’” and “the immediate reaction is, ‘Pump the breaks, we have to change this.’”

“I get it, Peter Dinklage is the biggest dwarf actor probably of all time, but it doesn’t make him king dwarf,” Postl added.

“I really hope Disney takes a step back and really sees other perspectives,” he said. “[Dinklage] doesn’t realize the damage he did for the dwarf acting community. Seven dream roles he’s now possibly taken away, and it’s ridiculous.”

Another dwarf actor, Jeff Brooks, told Daily Mail that Snow White and the Seven Dwarves was not an offensive story, and that the story depicts dwarfs in a historically accurate way.

“Dwarfs did work in the mines,” he said. “They did jobs that were easier to complete by people who are small. They worked in mines, manufacturing, they built planes, cars — all kinds of things that involved a cramped space.”

“In the movie they had their own house,” said Brooks, who added that it was not offensive to keep the dwarf characters in the film, because dwarfs are real people.

“I am hoping they cast little people and give them the work,” he said. “Peter Dinklage may be hurting the chance of some dwarf actors here.”

A third dwarf actor, Katrina Kemp, told the outlet that she doesn’t put the blame on Dinklage, as she doesn’t believe he was trying to take work from people. Kemp added that Disney, however, failed by relying on his voice alone.

“Going to Dinklage for this is like going to Kim Kardashian for law firm advice,” she said. “He is on another level, another plain of success completely.”

Lauren Brooks, who has represented dwarf actors through her talent agency, told Daily Mail that Dinklage “is one guy out of millions of people with dwarfism.”

“They are all wanting to be him,” she said. “If he doesn’t want the competition then that is pretty selfish for him to deny other people the right to work.”