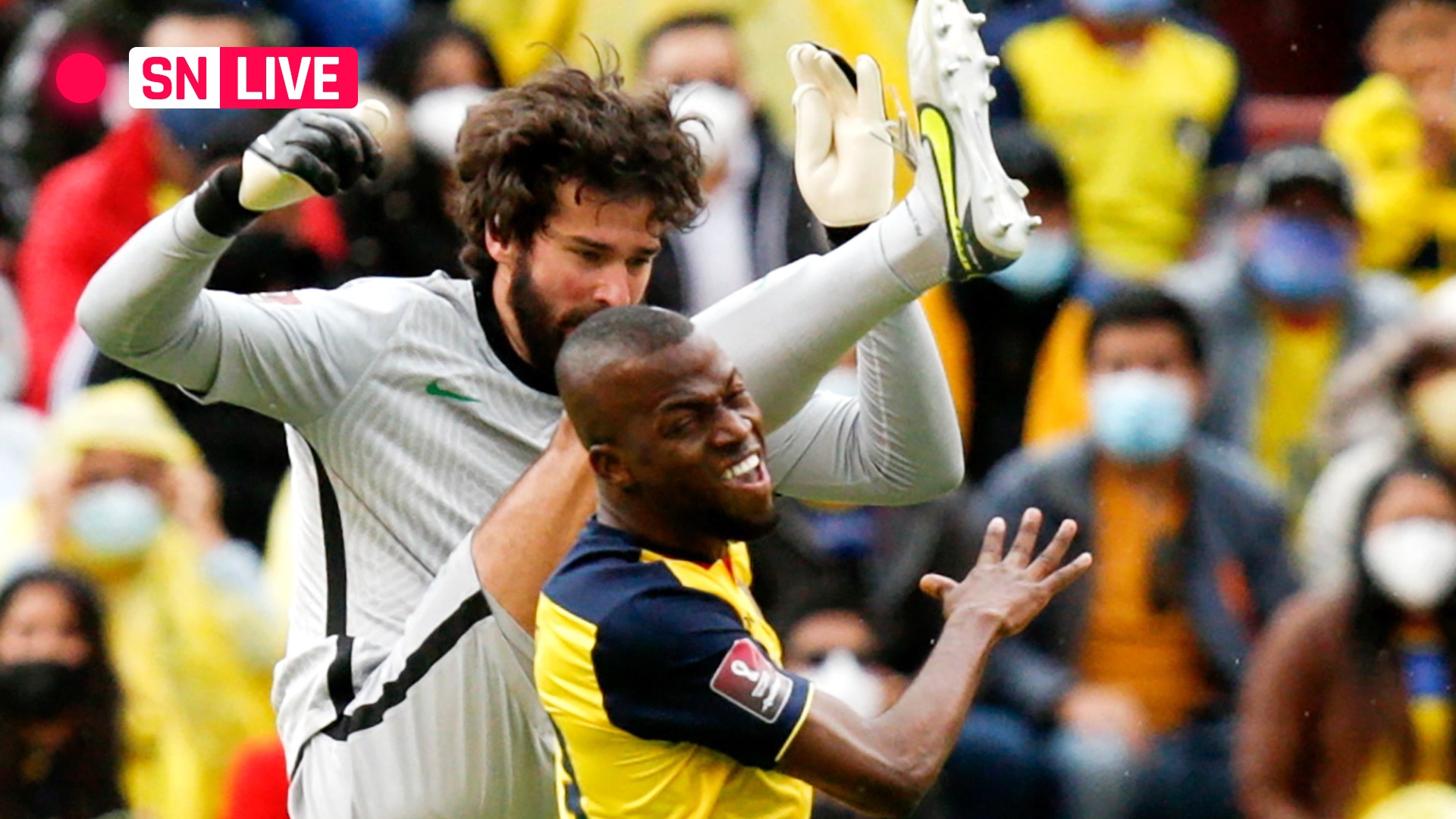 Ecuador and Brazil have been two of the best teams in South American World Cup qualifying, but they’ll be motivated by very different objectives when they meet on Thursday at the Casa Blanca (Estadio Rodrigo Paz Delgado) in Quito.

Brazil (1st, 35 points) has already clinched one of the four direct berths to Qatar 2022 that are on offer in South America. Now the five-time world champs want to maintain their place as the region’s top-performing team during qualifying and keep their undefeated record intact. The match is a chance to fine-tune the squad with 10 months until the World Cup and give an opportunity to other players.

Ecuador (3rd, 23 points) can’t take its foot off the pedal. La Tri is in a strong position to clinch a spot in Qatar and a win at home against Brazil would bring it that much closer with only three matches remaining. It would mark Ecuador’s fourth World Cup berth in the last six editions.

Sporting News will be following the World Cup qualifier live, providing score updates, commentary and highlights as they happen.

57th min.: It looks like a clear penalty, but the referee takes a look at it on the monitor and decides not to give it! It’s not evident what clear and obvious error the VAR signaled in that instance. It’s not obvious what the grounds were to rescind the penalty. This game is nuts.

55th min.: Penalty for Ecuador! Brazil’s Raphinha nicks Ecuador left back Estupinan, who made a dribbling run in the box. It’s a stone-cold penalty.

54th min.: Ecuador wants to walk the ball into the net and Brazil’s Alisson scoops it up. Gonzalo Plata makes a slalom run into the box, but his teammate Michael Estrada can’t get a shot off one-on-one against Alisson.

50th min.: Brazil’s Casemiro with a big chance on a set piece and his point-blank volley goes wide. He couldn’t get it on target. He already has one goal on the day.

49th min.: Ecuador scores, but it’s disallowed! The assistant referee flags that the ball went over the end line before the cross came in from the left. This is going to be an entertaining half.

46th min.: Second half is underway and Ecuador wins a corner kick in the opening seconds. But Pervis Estupinan slips while taking the corner and the ball goes out of play. Promising start.

Halftime: That was a wild first half. First Ecuador have a great chance in the first two minutes, then Brazil strike on a messy play that was a reflection of this game. After that we saw three red cards (one rescinded), five yellow cards (all to Brazil), 10 minutes of stoppage time and two karate kicks by each goalkeeper.

52nd+ min.: Ecuador center back Felix Torres sends a blast from distance that Alisson stops. And on the other end Matheus Cunha rips one that barely misses the left post. Brazil closer to a second there.

48th+ min.: YELLOW — And another card for Brazil’s Eder Militao for a foul on Moises Caicedo. Ecuador with another set piece into the box, it leads to a corner, but nothing comes of it. Ecuador not very effective on set pieces so far.

46th+ min.: There are 10 minutes of first-half stoppage time. It tells you what type of first half we had. Stop start, two VAR instances and plenty of cards.

42nd min.: YELLOW — More cards than chances in this game. Brazil’s Raphinha is booked for blocking a promising attack. And Ecuador’s Enner Valencia has another free header on the set piece into the box, but the ball was behind him and he was also offside.

39th min.: Gonzalo Plata goes down in the Brazil box on a challenge by Selecao left back Alex Sandro and that was borderline. He let himself go a little too easily, but it was close. No penalty for the referee.

33rd min.: SUB — Brazil brings on Dani Alves to play right back, and he replaces Philippe Coutinho. It’s the 120th cap for Alves.

31st min.: Common sense prevails after VAR. The Colombian head referee, Wilmar Roldan, checks it on the monitor and gives Alisson a yellow and rescinds the red card previously shown.

26th min.: A third red card! Alisson is now out. The Liverpool goalkeeper comes off his line, kicks the ball away and then that leg strikes Enner Valencia on the follow through. This one seems harsh. Brazil is down to nine men. Wild start.

20th min.: The referee just handed out another red card! This one goes to Brazil right back Emerson after a wild tackle — high leg between the legs of Ecuador forward Michael Estrada. It was Emerson’s second yellow. He had received his first yellow in the opening minute of the match.

18th min.: SUB — Ecuador brings in Hernan Galindez and take off a midfielder (Alan Franco). And Coutinho sends the free kick opportunity over the bar.

15th min.: What a disastrous start for Ecuador and Dominguez carries the weight of the responsibility here. His studs made their way up into Matheus Cunha’s neck and left a mark.

13th min.: What is Dominguez doing! After that poor play on the Brazil goal, the Ecuador ‘keeper comes off his line and karate kicks Matheus Cunha with a challenge that sent his studs into Cunha’s chest. Dominguez might be sent off. The referee is looking at the monitor now.

12th min.: The Brazil goal sucked the energy out of the half-full stadium. Ecuador has to show some personality to get back into this. Another Brazil goal could really kill the match.

5th min.: Goal Brazil! On the other end the visitors win a corner and after a couple of shots Casemiro cleans up the rebound after a Matheus Cunha header. Ecuador ‘keeper Alexander Dominguez did not command his box well in that instance, beginning with a weak punch-out.

2nd min.: What a chance for Ecuador! After kickoff, Ecuador wins a free kick on the left side and on the set piece Enner Valencia had a free header on goal and incredibly missed the target. He was totally unmarked.

4:01 p.m.: First Coutinho was back starring in the Premier League and now he’s back with Brazil. What a turnaround.

471 – Philippe Coutinho will play for Brazil 471 days after his last game with the National Team (4-2 win against Peru in October 2020). It was his longest interval without playing for Brazil under Tite. Return. pic.twitter.com/lpvgeD0pae

3:13 p.m.: A little taste of Quito and the arrival of the home team for the match:

Brazil coach Tite is without Neymar, who’s still working on gaining his full fitness from an ankle injury. Lucas Paqueta and Fabinho are suspended and regular right back Danilo wasn’t called up. But when you’re Brazil, you have plenty of backup options: Aston Villa’s Philippe Coutinho and Tottenham’s Emerson Royal are the fill-ins.

The roster selected by Ecuador coach Gustavo Alfaro features several players who are on the other side of positive COVID-19 tests. Goalkeeper Pedro Ortiz, Jackson Porozo, Jose Cifuentes, Janner Corozo, and Angel Mena did not make the 23-man matchday roster from Ecuador’s expanded roster. Mena was a doubt for a knock picked up during action with his club team Leon.

How to watch Ecuador vs. Brazil

The South American World Cup qualifiers are available exclusively on fuboTV in the United States .

Ecuador’s Estadio Rodrigo Paz, popularly known as the Casa Blanca, will be at 50 percent capacity for the match after an about-face by local health officials who originally ordered the match to be played without spectators.