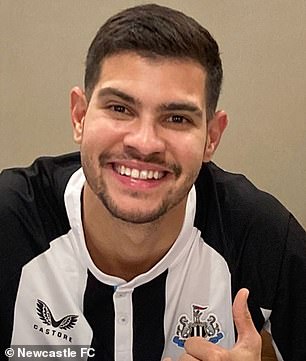 Newcastle’s survival is NOT down to new Saudi owners splashing £94m on five new players in January, insists Eddie Howe, as he responds to claims they bought their way out of trouble

By Craig Hope for MailOnline

Eddie Howe has hit back at those who claim Newcastle United‘s survival is simply down to their £94million January investment on five new players.

The Magpies emerged as Europe’s biggest spenders as they were backed in the transfer market for the first time by Saudi Arabia’s Public Investment Fund.

Howe inherited a team in November stuck in the bottom three but lifted them as high as ninth last month to earn himself a nomination for Premier League Manager of the Year.

Supporters recognise the transformation in players who had lost their way under former boss Steve Bruce, but there have been accusations beyond Tyneside of the club buying their way out of trouble. Howe disagrees.

‘The easy thing is to talk about money,’ he said. ‘It is not what has got us here. January helped massively, and the money helped the team, and the players who came in made a huge difference. But I don’t think it was “the” reason we did very well.

‘I want the players to get the credit for their performances. The team has come together and fought for every point, and I don’t think money gives you that.

‘You look at the St James’ Park atmosphere again, a crowd in a place where they are proud of the team and seeing a team giving everything to try and win. It has been great to see and experience. It has been electric and the crowd has helped us get points. A key part of the future is to try and keep that dynamic as strong as it is now.’

The club’s owners have come in for criticism in recent days after Sportsmail revealed the team would be turning out in the colours of Saudi Arabia next season.

News of the green-and-white change kit came on the back of Howe confirming the club’s transfer budget will be restricted by financial rules this summer.

But the head coach still believes the turnaround this season has proven what could lie ahead.

‘The appetite is whetted by what we could be in the future,’ he said. ‘There is lots of hard work to get to the levels we want to be, but without a doubt we can get there.

‘It will be amazing to see the club in a few years’ time, because the potential is enormous.’