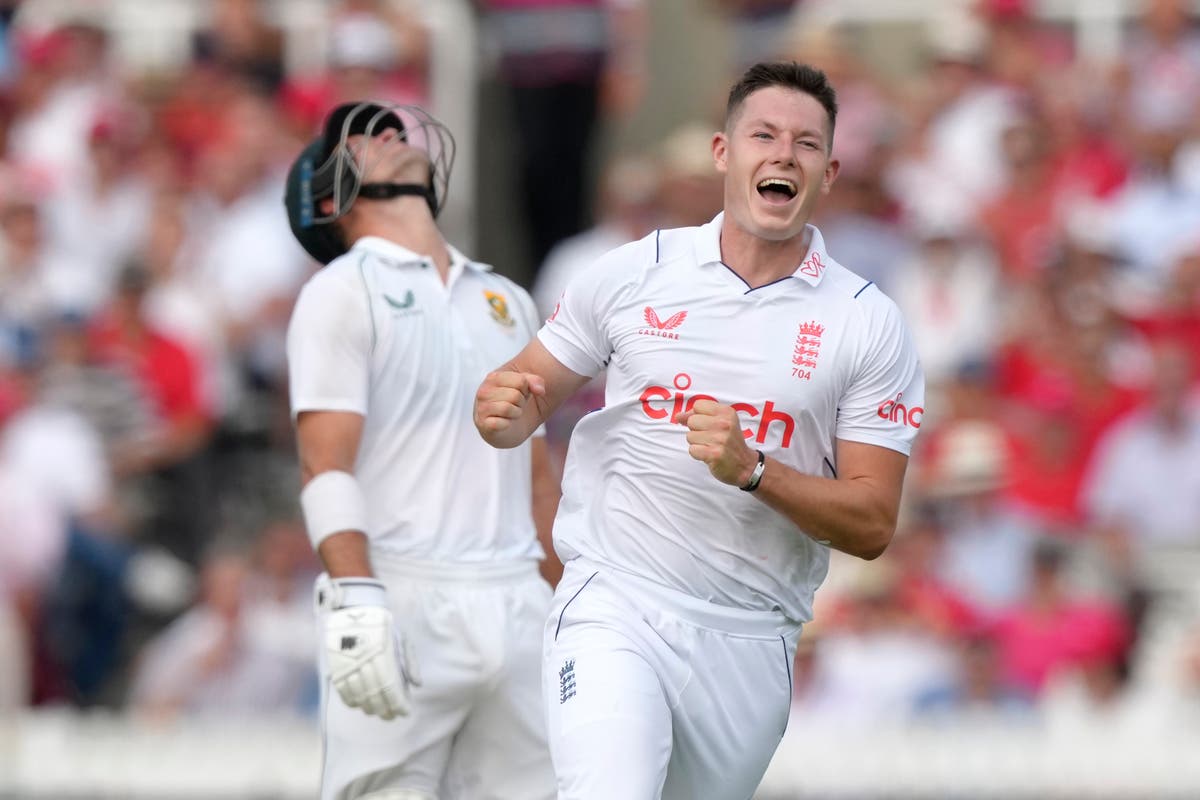 South Africa maintained their stranglehold on the first Test at Lord’s by bowling England out for 165 on the second morning with Kagiso Rabada claiming an impressive five-wicket haul.

Rain halted the tourists’ charge on day one with England struggling to 116-6 and on the verge of posting their lowest total since the new regime of Ben Stokes and Brendon McCullum set about transforming red-ball cricket in this country.

While the hosts moved beyond the 141 they scored here against New Zealand in June, Rabada sent Ollie Pope back to the pavilion early and picked up 5-52 to bring England’s first innings to an end inside an hour on day two.

South Africa openers Dean Elgar and Sarel Erwee were handed a tricky 50-minute period to negotiate before lunch but did so to walk off with their side 27 without loss after Elgar successfully reviewed a caught behind off Stuart Broad, while Zak Crawley also put down a thick edge from the away captain. But Elgar then fell to Anderson in unfortunate circumstances, playing on to his stumps.

Lord’s was a sea of red with the home of cricket turning ‘Red for Ruth’ for the fourth successive year in memory of Sir Andrew Strauss’ wife Ruth, who died in 2018. Follow the latest score and over-by-over updates from the first Test below.

49th over: Van der Dussen offers up a tentative prod and almost plays on, but the inside edge runs all the way to the boundary, to Stokes’s frustration. Stokes hasn’t bowled much during this innings but he’s looked threatening when he has.

48th over: Leach continues. Erwee tries an ambitious reverse sweep which top-edges into the air and comes down safely, and they pick up three runs. Van der Dussen finishes with another three.

47th over: Anderson draws a rare loose shot from Erwee, attempting to cut through point, but fortunately for the batsman it flies straight through to keeper Foakes. Erwee picks up three off his legs and then Van der Dussen edges towards fourth slip, but it doesn’t carry.

46th over: An important wicket from Leach, though Rassie van der Dussen wastes no time hitting back with a well-struck four through cover.

Jack Leach strikes! His first ball of the over turns sharply off the pitch and flicks Markram’s outside edge en route to Foakes’s gloves. An important breakthrough straight after tea.

45th over: Anderson steams in and Erwee immediately prods him for two runs. This could be a hard evening’s toil for England.

The players are back out on the field for the day’s final session, and it looks like James Anderson will begin from the Pavilion End.

Another session goes the way of South Africa. Sarel Erwee has showed great composure in picking his moments and picking off England’s bad balls, while the bowling hasn’t been as quick nor as consistently threatening as the South African seam attack. Admittedly, conditions have not favoured England – perhaps it would be them amassing quick runs now had they bowled first yesterday – but it has still been more of a struggle than it might have been.

44th over: Serious spin for Leach, who dances with the edge of Markham’s bat a couple of times, although he is also on the receiving end of a wonderfully cut four. And that’s tea.

43rd over: A lovely cover drive by Markram, who powers Anderson’s in-swinger to the boundary. A back-foot single too, and South Africa are closing in on England’s total.