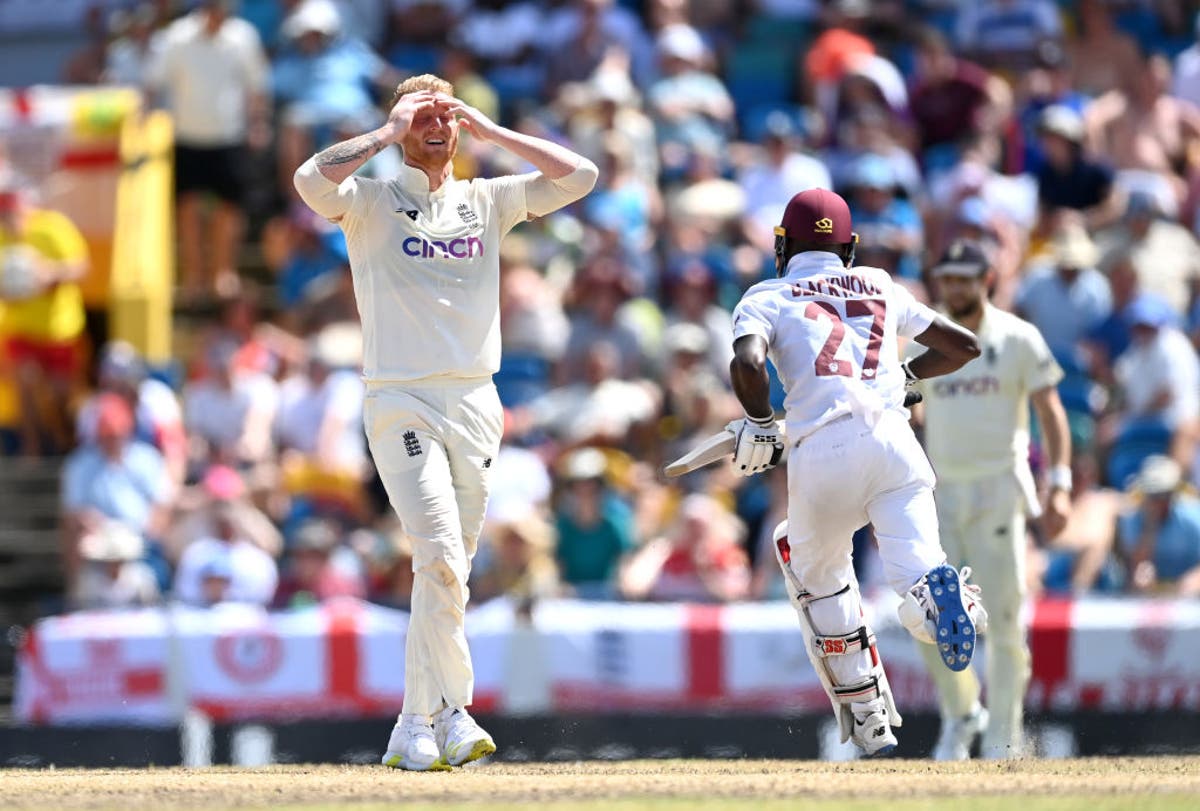 We are now halfway through this three-match series and already the theme has been tit for tat. Following the stalemate in the first Test, the second in Barbados looks to be going the same way. For after England batted for five sessions, West Indies, as they closed day three on 288 for four, 219 in arrears, are about to do the same.

The pitch at Bridgetown is far too skewed against the bowlers for an even contest. But with the scoreboard pressure of England’s 507 for nine declared, the hosts, specifically Kraigg Brathwaite, still unbeaten on 109, and Jermaine Blackwood with 102, carried a steady hand in response. The pair shared a stand of 183 for the fourth wicket.

There is still plenty to do, and the surface is only going to get tougher, though who knows by how much. Nevertheless, the two wickets to fall at the start of the day hinted at more to come. Those did not come to fruition largely thanks to the contagious calm of the West Indies captain.

Brathwaite had been out on the field since losing the toss on Thursday morning and grazing for all of 151 overs as England compiled their mammoth total. This tenth hundred, all as opener, was typical of those powers of concentration that never waned during his 337 balls faced, and counting. You have to go back to Chris Gayle in 2013 for the last non-Brathwaite century at the top of the order. This, though, was the 29-year-old’s first at the Kensington Oval, his home ground.

This time he was accompanied by Blackwood for all of 411 deliveries. The 30-year-old is not exactly known for his stickability, as per his comical swipe across the line dismissal for two when West Indies were trying to save the game last week in Antigua. But the reflection of the last few days was evident from the calmness he eventually assumed for a third Test century, and second against England, with an average of 45.77 against them set against an overall average that has now peaked just above 30.

Saqib Mahmood had the ignominy of having his maiden Test wicket chalked off for overstepping the front line, at a time when England were desperate to break this relentless fourth innings stand. Blackwood was on 62 at the time, and West Indies momentarily reduced to 229 for four before the umpire was informed of the no ball. It was the second life for Blackwood, who was unknowingly trapped LBW by Ben Stokes on nought, but saved by a surprising lack of DRS despite England having all three reviews in hand.

As the final session wore on and nerves frayed, the pair were involved in a heated exchange in the middle of the pitch. The kind of showdown “we don’t want to see” but secretly do. The show didn’t last long as Stokes was taken off the next over and Blackwood dabbed one wide of slip to move to three figures. But he went out in entertaining fashion, letting a straight ball from Dan Lawrence hit him in front of middle stump. And, of course, he reviewed it.

After the glory of Stokes’s remarkable 120 and Matt Fisher’s maiden Test wicket, Friday was expected to be a day when any further joy had to be earned. West Indies had moved relatively comfortably to 71 for one in their first innings trailing by 436, with Brathwaite and Shamarh Brooks set to continue on a sound batting track.

They did not have to work too hard for the first inroad, as Brooks looped a cut shot to Chris Woakes at backward point to give Leach his first wicket of the innings in the eighth over of the day. Further generosity – this time on the umpire’s part – saw Nkrumah Bonner fall LBW to Stokes. The 33-year-old, fresh from a stellar display in the first Test with 123 and then a match-saving 38 from 138 balls, reviewed immediately. Television umpire, Gregory Brathwaite was unable to gauge conclusively whether impact of bat had come before pad thus had to stay with the onfield decision of “out”.

A rare moment of fortune came when another Stokes-led appeal for LBW against Blackwood came and went. Joe Root decided not to take one, missing the opportunity to see three reds on the big screen – a predicted path straight into the middle of leg stump – and reducing their opponents to 101 for four. It proved to be a turning point.

From lunch, after both sides dined on 114 for 3, things got a lot easier. That late movement Mahmood was getting still present, just not as devilish with an older ball. Brathwaite moved to his half-century off 167 deliveries, the slowest of his career after posting his fastest, off 62, in the first innings of the previous match.

Blackwood, now settled, was on a similar slow burn. His half century, off 113, also the slowest of his 18 ventures to that marker, featuring some typical full blooded shots through the off, able to continue staying leg side of the ball with ease.

The second new ball came and brought very little change, beyond a harder red cherry to come onto the bat. By now Leach was focussing on varying his pace and occasionally over-pitching, though the latter was not restricted to the left-arm spinner. Brathwaite in particular making hay with sweeps and drives amongst a sea of dot balls.

A dab off Leach through third man brought him two to take him to 100, with 11 fours stretched across six hours and 50 minutes of batting since he came to the crease around the start of the third session on day one. Unlike Blackwood, Brathwaite had been chanceless.

Blackwood’s century was soon ticked off, after that tete-a-tete with Stokes. Then came his dismissal and nightwatchman Alzarri Joseph to absorb what English fight remained.