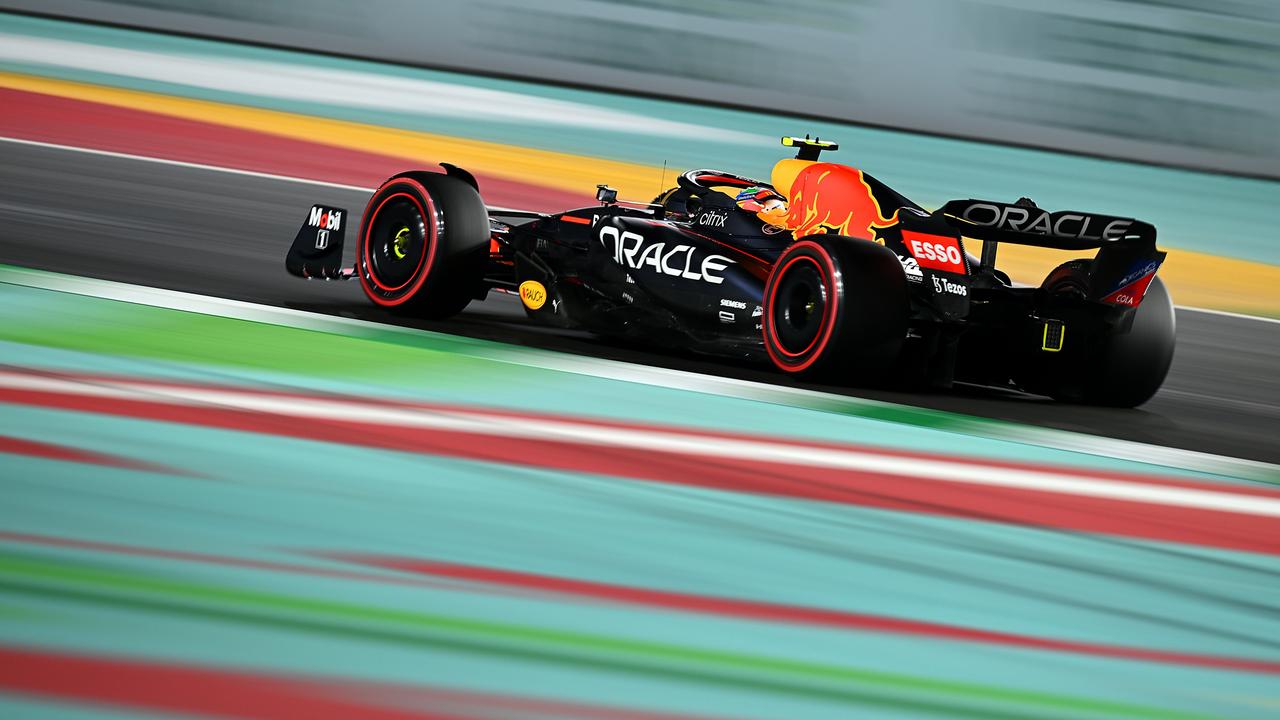 Sergio Perez claimed his first ever Formula One pole at the 215th attempt when the Mexican upstaged Red Bull teammate and world champion Max Verstappen in qualifying for the Saudi Arabian Grand Prix. Watch live on Foxtel and Kayo from Monday 2:30AM AEDT, race from 4AM!

Ferrari’s Charles Leclerc joins Perez on the front row with Verstappen on the second row after qualifying in fourth behind the other Ferrari of Carlos Sainz.

Saturday’s qualifying was marred by a horror crash suffered by Mick Schumacher, which ruled him out of the race, and Lewis Hamilton’s shock elimination in the opening Q1 session for the first time since 2017 – and first time on pure pace since 2009.

It was a dramatic session coming just hours after it was confirmed the weekend action would go ahead following lengthy talks overnight about racing in the aftermath of Friday’s missile strike by Yemen’s Huthi rebels on the nearby Aramco fuel plant.

“It took me a couple of races! But what a lap man, it was unbelievable!” said Perez, the first Mexican to head an F1 grid.

“I could do 2,000 laps and I couldn’t beat that one! he added. Verstappen described his first lap in Q3 as “terrible”, adding: “I didn’t really feel comfortable. Checo did a great job today and I am very happy for him.”

Red Bull will now be hoping for better luck on Sunday than in the season-opener in Bahrain last week when both their cars failed to finish in a race won by Leclerc.

Leclerc, who looked set to confirm his early season pace with pole before Perez produced a flying last lap, said: “I didn’t expect Checo (Perez) to come with that lap time so congratulations to him.”

In Q2, Schumacher was the victim of a high-speed crash after his Haas car bounced off the Jeddah street circuit barrier at around 240kph after clipping a kerb.

The 23-year-old son of German F1 legend Michael Schumacher was lifted out of the wreckage of his stricken car and into an ambulance by medics.

Haas reported that Schumacher appeared “physically fine” and had spoken to his mother, Corrina.

In a statement F1’s governing body the FIA confirmed that an assessment at the medical centre “revealed no injuries”.

It added that Schumacher “had been transferred to King Fahad Armed Forces Hospital, Jeddah, for precautionary checks”.

He was later ruled out of Sunday’s race but tweeted: “Hi everyone, I just wanted to say that I’m ok. Thank you for the kind messages. The car felt great @HaasF1Team, we’ll come back stronger.”

The session was red-flagged after the accident in which the rear of the Haas car was split asunder from the main monocoque and body.

It was the second red flag in the session following an earlier high-speed collision by Williams’ Nicholas Latifi in Q1. The Canadian escaped unhurt.

Q2 did not feature Hamilton for the first time in five years.

Mercedes’ seven-time world champion has 103 poles to his name, but in a major upset will start Sunday’s race from 15th on the grid.

“I struggled with the balance of the car, not where we want to be,” added the downbeat deposed champion. “Unfortunately just went the wrong way with the set up.”

Russell admitted he and the Mercedes team were struggling to understand their new car.

“As a team it was not a good day,” said Russell.

“We don’t have a handle on the car at the moment. It has been a bit inconsistent. We are fighting for this very small window and if you can’t find it you don’t have any confidence in the car.”

Two-time champion Fernando Alonso was seventh in the second Alpine, ahead of Valtteri Bottas of Alfa Romeo, Pierre Gasly of Alpha Tauri and Kevin Magnussen of Haas.

The Grand Prix weekend went ahead but only after lengthy talks overnight about racing in the aftermath of Friday’s missile strike which ignited a blaze with black smoke billowing across the street circuit.

Team principals, race organisers, Formula One and the ruling body, the FIA, had said they had reached a unanimous agreement for the show to go on, in less than an hour, but it took much longer to convince the drivers.

After around three and a half hours of further talks, they agreed to race. In a statement on their behalf, the Grand Prix Drivers’ Association (GPDA) said “natural human concerns” had caused many to have doubts about taking part.

Follow the F1 Saudi Arabian Grand Prix in our live blog below!