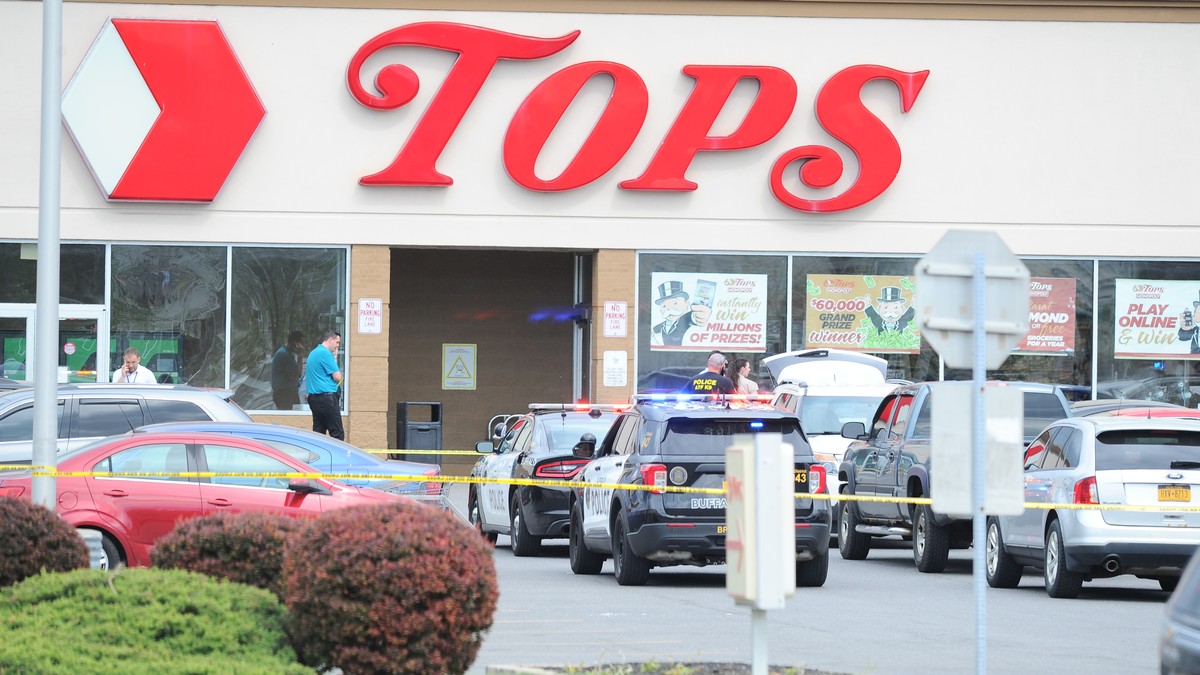 On Saturday a white man in Buffalo, New York entered a Tops Grocery Store in a predominantly Black neighborhood and opened fire with an assault rifle, hitting 13 and killing 10. He’d attached a camera to his helmet and livestreamed the assault on Twitch, and left behind a racist manifesto. From Twitch, the video made its way to other sites. It was shared on Facebook, Twitter, and Streamable where millions viewed it in the few minutes it was up.

The proliferation of horrifying content online is a perennial problem online, and sites like Twitch, Facebook, Twitter, and YouTube struggle to prevent this sort of thing from spreading, even if the initial upload is quickly taken down. Most people do not want to casually see videos of atrocities and murder while they’re scrolling Facebook and Twitter and experts say that the memeification and spread of this kind of content inspires copycats.

As of this writing, direct links to the video and the manifesto are still present on Facebook and Twitter. Pages of the manifesto, often slightly altered to escape automatic moderation, are available across social media.

In 2019, a man entered a mosque in Christchurch, New Zealand and opened fire. He live streamed to Facebook for 17 minutes before moderators shut down the feed. The first complaint came after 12 minutes. He also published a long, rambling manifesto filled with internet in-jokes and memes. Later that year, a shooter in El Paso copied sections of the Christchurch manifesto before going on his own rampage.

The Buffalo shooter, too, posted a 180-page meme-laden manifesto referencing past shootings and manifestos. “It copies the Christchurch shooter’s question and answer style as well as the Halle synagogue shooter’s style of providing in depth instructions on how to plan another attack,” Amarnath Amarasingam an assistant professor of religion at Queen’s University in Canada and a far-right terrorism expert, told VICE News.

The live streamed video amounts to just or 7 minutes of footage. The first five minutes show the shooter driving, and the last two show horrific violence. Twitch was able to shut down the shooter’s feed after just those two minutes. But the video was quickly archived and is continuing to proliferate all over the internet.

“We investigated and were able to suspend the user in less than two minutes after the violence began,” Angela Hession, Twitch’s Head of Trust and Safety, told Motherboard. It pointed to the Global Internet Forum to Counter Terrorism (GIFCT) as being instrumental in its efforts. The GIFCT is a shared database of digital “hashes” that tech companies use to identify extremism content.

Started in 2019 by a joint effort of Facebook, Twitter, Microsoft, and YouTube, the GIFCT has had some success combating the viral spread of mass shooting videos and other extremist content. But video—particularly live video—remains more difficult to moderate than text because it is not as easily parsable to AI, and digital fingerprinting may be successful in identifying only files that aren’t modified.

Facebook did not provide a written statement but told Motherboard it quickly designated the video as a violation of its policies and acted to actively block the shooter’s account, any copies of the video of the attack, and links to his manifesto. Facebook said that any copies or links of any of this content will be removed and that it’s working closely with the GIFCT.

It also said that the task is hard, what it called an “adversarial space.” Facebook said people continue to share this content, despite Facebook’s best efforts to stop it. Posters routinely use various methods to bypass content moderation. While writing this story, I easily found various pages of the Buffalo manifesto on Facebook that had been modified to make it shareable. This was typically as simple as highlighting a passage or adding an extra image to the page.

On Twitter, links to the manifesto and images of the violence spread without much moderation for most of the weekend, according to the New York Times. “We are removing videos and media related to the incident,” a Twitter spokesperson told Motherboard. “In addition, we may remove Tweets disseminating the manifesto or other content produced by perpetrators. We believe the hateful and discriminatory views promoted in content produced by perpetrators are harmful for society and that their dissemination should be limited in order to prevent perpetrators from publicizing their message.”

Twitter did not explain why it “may” remove some links disseminating the manifesto and not others.

But content moderation and tools like the GIFCT only work for those who use them. It’s still possible, and even easy, to find videos of these shootings on the big social media platforms. It’s even easier outside of their ecosystem