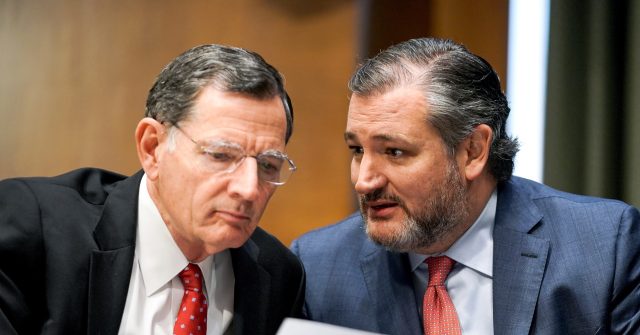 The bill is called the Safe Kids, Safe Schools, Safe Communities Act of 2022.

The legislation also focuses on making sure that the National Instant Criminal Background Check System (NICS) has all the information necessary in its system to perform a thorough background check. This means all records that could disqualify someone from a purchase would be included.

File/A .357 magnum revolver is seen at a gun shop in Dundee, Ill, as a gun applicant completes a background check. (Brian Kersey/UPI)

Our Safe Kids, Safe Schools, Safe Communities Act would focus on making schools safer by increasing the number of properly trained school resource officers on campus who can deter and, if necessary, stop school shooters before our kids are harmed, increasing the number of school mental health professionals who can identify at-risk children and ensure those kids get the help they need before they become violent, and providing funding to improve the physical security measures for schools. Our legislation also focuses on curbing gun violence by improving NICS and prioritizing law enforcement, criminal prosecutions of persons who illegally buy a gun and expanding Project Exile to more effectively prosecute those who commit violent crimes with a firearm. These are issues that the left and right should be able to agree on. Our legislation would not only help prevent school shootings, but do so while still protecting the constitutional rights of millions of law-abiding Americans.

We all want to help prevent tragedies like what we saw in Uvalde. My focus has always been on mental health and increasing school safety. This is exactly what Senator Cruz and I focus on with our Safe Kids, Safe Schools, Safe Communities Act. Our legislation will make a difference by securing schools and providing mental health professionals to identify and address the behavioral health needs of our students. This is an opportunity for Congress to take meaningful action to make our communities safer while always protecting the constitutional rights of Americans.

Sen. John Cornyn (R-TX) is pushing an alternative bill that contains numerous gun controls, including an expansion of background checks for some purchasers, an expansion of the prohibited purchasers list, and the use of tax-payer money to incentivize the adoption of red flag laws.