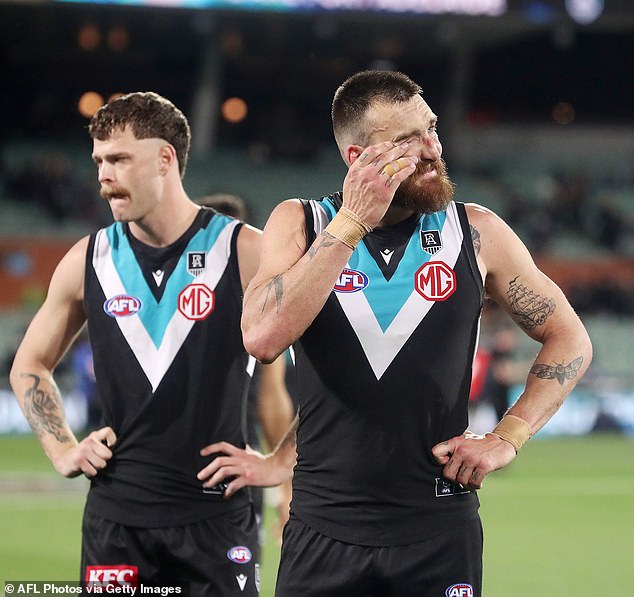 AFL legend and Fox Footy analyst David King has declared that Port Adelaide has reached ‘the end of the road’ and that their ‘their premiership campaign is over’ following their 0-2 start to the 2022 season including a flogging by Hawthorn on Saturday night.

Charlie Dixon (right) was emotional after his side bowed out in the preliminary final in 2021. He is a key player for Port and is missing through injury.

While it has been a dream start for Hawthorn, it has been a nightmare for Port fans after the Power reached preliminary finals in 2020 and 2021.

It has not helped their cause that mainstays like Aliir Aliir (ankle), Robbie Gray (knee), and Trent McKenzie (ankle), Charlie Dixon (ankle) and Orazio Fantasia (knee) are still sidelined this season.

The Power lost despite having four of the game’s top ball-winners, with Travis Boak leading all players with 39 disposals. Hawthorn’s Tom Mitchell recorded 28.

Port Adelaide failed to score goals despite dominance in possession, as they struggled to score without Dixon.

King said Port had become exposed and lacked strike weapons capable of pressing for a premiership, effectively ruling Port out of contention for the season after just two rounds.

‘They look like a group to me that have lost their asset, I know Aliir Aliir didn’t play on the weekend. But I look at the mechanics, one out, one in, it should just be as simple as that,’ King said on Fox Footy.

‘Then you start to drill in a little bit deeper. They have some great accumulators in the midfield, but do they really impact? Do they really have the (Christian) Petracca types, the strikers?

‘They’ve got to make a decision on Todd Marshall, is he the answer or not going forward? He ended the game down back.

‘I look at Connor Rozee, he’s gone from a headache to a migraine this guy. Is he a contested possession player? Is he a fruit as a top 10 draft pick, or is this what he is? If he is, I think they’re in a bit of trouble.

‘Duursma is another one, I see him do some nice things from time to time, but if he was at another club and not hiding behind those elevated picks of Butters and Rozee, I think he’d be under serious scrutiny.’

Aliir Aliir is one of several injured stars who missed the Hawthorn clash. The Power is lacking key players to create attacking opportunties

‘We get it, Charlie Dixon is out, he’s always been the main focal point. There’s always been discussions around if they go to Dixon too often. They’re starting to see a forward line without Dixon.

‘I feel like they’re launching from too deep, you love to get that extra handball to get into a position where the Hawthorn defenders have to make a decision, do they come forward or retreat to go on their man.

‘Right now those long kicks inside forward 50 are so easy to mop up and read, and the defenders have got time to drop off and impact in the air.’

Port Adelaide coach Ken Kinkley tries to rally his troops during the loss. He admits he has plenty of work to do after a disastrous 0-2 start to the season

Port coach Hinkley agreed that their issues converting opportunities were plain to see and conceded that he had ‘a lot to fix’.

‘In the past we’ve been able to get a pretty clear, consistent indicator with what happens when we get beaten and play poorly. Tonight was a different look,’ he told reporters after the loss.

‘One thing was really clear, we clearly failed going forward to convert our opportunities. On the flip side of that, they were able to turn all their opportunities in score.

‘So if you look at the really clearly, we broke down badly in offence and defence, that’s a different breaking point for us. We’ve usually been really strong in defence and our offence has been building.

‘Tonight was really clear that our front half stuff, being able to hit a scoreboard, execute with some confidence at all, was just not there. The return, I think eight or nine goals from out forward 50, Hawthorn turned over.

‘That just doesn’t happen to us, but I have to be really honest, that did happen tonight, so I need to spend time looking at it.’

‘He knows that there’s a lot fix, that’s my worry,’

As an example of where Port fell apart defensively against Hawthorn, King described the play when Connor Macdonald blew by several players.

‘This a standard play, so you’re organised here. And he sprints past about six of them. Where’s their defence gone? There’s the ruckman trying to get back, the rest all ad hoc, they’re all at sea,’ he said.

Port will have a chance to correct the ship when they play cross-town rivals Adelaide in round three, with the Crows also enduring a tough start to 2022.

Then the Power face tough assignments against reigning champions Melbourne and a Carlton side that is in-form and looking to crack back into the finals this season.