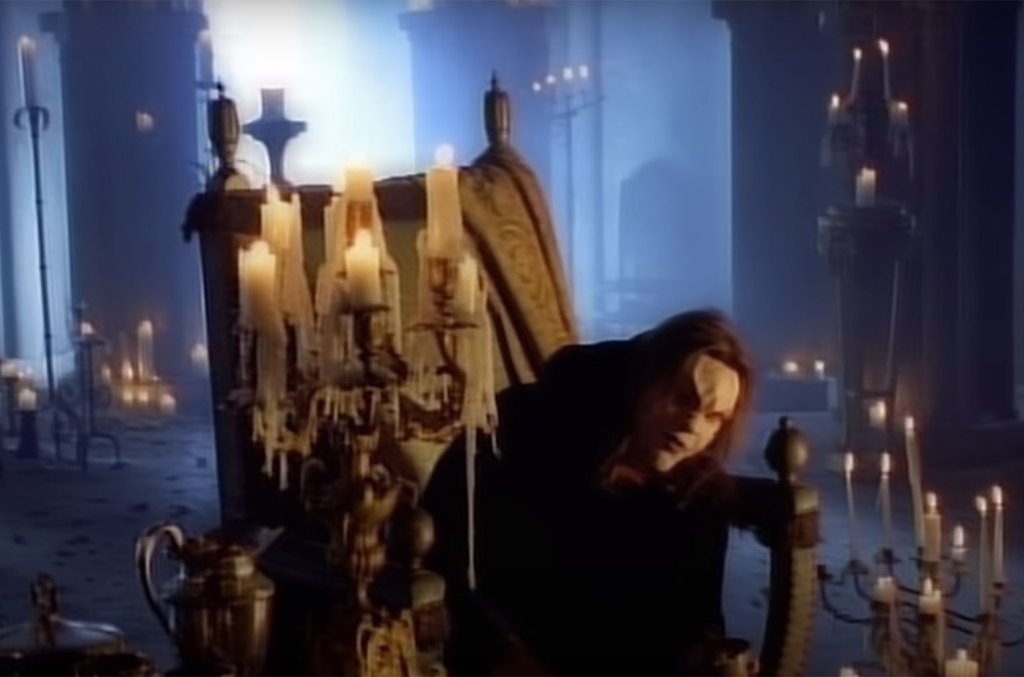 Forever No. 1 is a Billboard series that pays special tribute to the recently deceased artists who achieved the highest honor our charts have to offer — a Billboard Hot 100 No. 1 single — by taking an extended look back at the chart-topping songs that made them part of this exclusive club. Here, we honor the late Meat Loaf with a look at his first and only Hot 100 No. 1, the over-the-top 1993 epic ‘I’d Do Anything For Love (But I Won’t Do That).’

Meat Loaf should’ve ruled the ’80s. His breakthrough album Bat Out of Hell had been one of the great success stories of the late ’70s, a fully formed debut that married prog-rock pomp with E Street Band urgency and operatic stakes, carried by the actor/singer’s larger-than-life voice and personality. It sold tens of millions of copies worldwide, reached the year-end Billboard 200 albums charts for both 1978 and 1979, and made Meat Loaf a superstar. The next decade would see pop and rock only further embracing Bat Out of Hell’s sense of over-the-top melodrama, while the 1981 introduction MTV gave popular music’s most visually and theatrically inclined artists a platform to present their widescreen visions to the world in heavy rotation. Everything was set up for the artist born Marvin Lee Aday to become one of the defining artists of the era.

However, Meat Loaf’s attempts to follow up Bat Out of Hell were unfortunately waylaid. At the end of the decade, the singer lost his voice due to a combination of tour exhaustion and drug abuse, and primary artistic partner and songwriter Jim Steinman decided to use the songs he’d penned for the project for his own debut album as a performer, 1981’s Bad For Good. By the time singer and songwriter reconvened for the Dead Ringer album later that year, public enthusiasm had dimmed and the material wasn’t as strong — especially without Bat producer, ’70s hitmaker and Rock and Roll Hall of Famer Todd Rudngren, behind the boards — leading to the set peaking at No. 45 on the Billboard 200 and generating no major hits. Meat Loaf and Steinman’s professional relationship would splinter shortly after, and while the latter would pen sizable smashes that decade for Bonnie Tyler (“Total Eclipse of the Heart”) and Air Supply (“Making Love Out of Nothing at All” — both of which Loaf claims were originally offered to him — the singer would go the rest of the ’80s without so much as a top 40 Billboard Hot 100 hit or RIAA gold-certified album, seemingly a has-been in the decade he helped set the table for.

By late 1993, the ’90s were already, well, the ’90s. The crescendoing grandiosity of the ’80s had largely faded out in popular music, with the joint takeovers of grunge and alternative in rock and West Coast G-funk and East Coast boom-bap in rap making the decade’s musical identity simpler, edgier, and significantly less fantastical. The biggest top 40 stars were in the pop/R&B hybrid hitmaking mold of Mariah Carey and Janet Jackson. It would not have seemed like the ideal time for Meat Loaf, once again reunited with Steinman and ready to journey Back Into Hell with the long-delayed official sequel to his 1977 blockbuster. But journey the pair did, and the singer was rewarded with the first and only Hot 100 No. 1 of his career, thanks to the set’s return-to-form lead single — the epic-even-when-radio-edited “I’d Do Anything For Love (But I Won’t Do That).”

In truth, Meat Loaf’s return wasn’t totally without precedent or peer, even in 1993. That was the year that Aerosmith, fellow ’70s rock survivors who’d since fallen on hard times — albeit ones who had started their comeback a little earlier, returning to pop prominence in the late ’80s — started enjoying their greatest success of the MTV era, with their multi-platinum Get a Grip album and a trio of plot- and action–heavy videos starring teen actress Alicia Silverstone. It was also the final year of Guns N’ Roses’ Use Your Illusion cycle, when the once raw and raunchy hard-rock band got big and weird, culminating in the nine-minute psychodrama of “Estranged” and its music video, one of the most epic and expensive (if also largely inscrutable) clips ever aired on MTV. There was still counter-programming available for those who missed the large-scale, panoramic rock renderings of the late ’70s and ’80s — and Meat Loaf was prepared to give it to ’em bigger and more colorfully than anyone.

Despite coming so strong out of the gate, “I’d Do Anything For Love” still has a ways to go. The full album version is a staggering 12 minutes long, while the edited MTV version runs a somewhat more manageable 7:40 and the radio edit gets in and out in a brisk-by-comparison 5:16. As was typical of classic Meat Loaf, there are a variety of shifts in tempo, tone and intensity — and, in an echo of Ellen Foley duet (and signature Bat hit) “Paradise By the Dashboard Light,” a female co-star in studio singer Lorraine Crosby, though on the album version she doesn’t even enter until almost the 9:30 mark. But it always circles back to that immediately unforgettable chorus, a pledge of eternal and unconditional devotion — well, except for one lone condition.

And what was that exception? The mystery behind the “That” in “I’d Do Anything For Love (But I Won’t Do That)” certainly played a large part in making the song a phenomenon, a common subject of casual listener debate that lingers to this day. (The 2020 Oscar-nominated drama The Sound of Metal features its two main characters — metal bandmates and romantic partners — singing along to the song while driving and trying to divine the “That” meaning, with one quipping, “Anal.”) In truth, the mystery was no mystery at all: As Meat Loaf would frequently point out, often seemingly to his great frustration, the answer is laid plain in that opening chorus, and again (with different but similarly themed lyrics) in every subsequent chorus: “I’ll never forget the way you feel right now… I would do anything for love, but I won’t do that.” (Talking to journalist Dan Reilly, Loaf blamed Steinman’s writing for hammering home the “I would do anything for love” part of the chorus with so much repetition that listeners always forgot the lyrics that came immediately before it.)

Regardless of the reason for the confusion, the seeming ambiguity of the chorus helped make the song a mid-’90s pop culture fixture — as of course, did the song’s video, directed by future action feature auteur Michael Bay. A Beauty and the Beast-themed love story featuring Meat Loaf in monster makeup and actress Dana Patrick in Lorraine Crosby’s co-starring role — with heavy visual echoes of Aerosmith’s “Janie’s Got a Gun” and the GnR Illusion mini-epics (and no shortage of motorcycles, natch) — the clip finally brought Meat Loaf fully to life on MTV, as none of his ’80s clips had been able to do. It briefly made the then-46-year-old singer as big a star on the channel as Eddie Vedder or Snoop Doggy Dogg, finishing at No. 11 on the channel’s top 100 videos of the year list for 1993.

While the singles on the original Bat Out of Hell may have ultimately proven too unwieldy to threaten the top of the Hot 100 — proto-power ballad “Two Out of Three Ain’t Bad” was the album’s biggest hit, peaking at No. 11, while “Paradise” and “You Took the Words Right Out of My Mouth” scraped the bottom of the top 40 — the pop mainstream seemed to have no such concerns in embracing “I’d Do Anything For Love.” The song debuted on the Hot 100 at No. 68 on the chart dated Sept. 16, 1993; a mere seven weeks later, it replaced Mariah Carey’s “Dreamlover” at the chart’s apex, staying there for five weeks before being booted by Janet Jackson’s “Again,” a rare rock detour in a year where the Hot 100 was largely dominated by pop and R&B. In 1994, it also won Meat Loaf his lone Grammy, for best rock vocal performance, solo.

Meat Loaf never reached the chart’s top 10 again, though he did notch two more top 40 hits off Bat II in 1994 with “Rock and Roll Dreams Come Through” (No. 13) and “Objects in the Rear View Mirror May Appear Closer Than They Are” (No. 38), and made one final visit to the region in 1995 with Welcome to the Neighborhood lead single “I’d Lie For You (And That’s the Truth).” Steinman would return to the chart’s top tier in 1996 with the Celine Dion-sung, No. 2-peaking “It’s All Coming Back to Me Now” — another stadium-sized power ballad whose sound (and music video) were deeply reminiscent of “Anything For Love.” Loaf and Steinman together would try to recapture the Bat magic one more time a decade later, with 2006’s Bat Out of Hell III: The Monster Is Loose, which debuted in the top 10 of the Billboard 200 but received mixed reviews and failed to generate a hit single.

Today, the original Bat Out of Hell is the work most closely associated with Meat Loaf, still inescapable on classic rock radio and at karaoke nights and inspiring its own (Steinman-helmed) theatrical adaptation in 2017. But “Anything For Love” stands alone as Meat Loaf’s global pop peak — going to No. 1 in over two dozen countries, restoring the rock icon’s legacy, and making up for nearly his entire lost ’80s with one super-sized single.