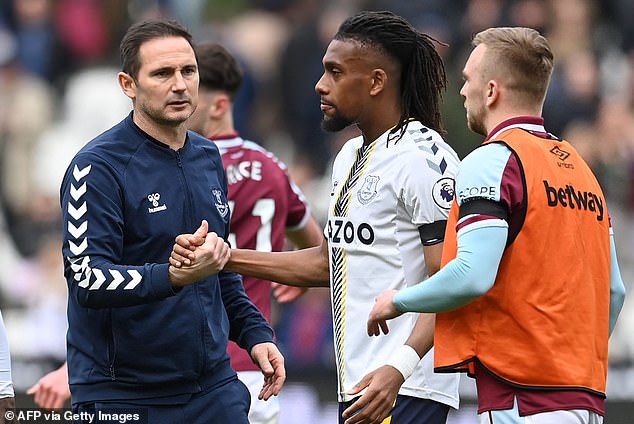 Frank Lampard moans that ‘things are going against’ Everton after 2-1 defeat by West Ham leaves them deep in relegation mire ahead of crunch Burnley clash: ‘Next week maybe our free-kick goes in the top corner’

By Kieran Gill for the Daily Mail

Frank Lampard put Everton‘s latest deflating loss down to circumstances, complaining that things are conspiring against his team.

Lampard lost Donny van de Beek to injury in the warm-up, forcing him into a late reshuffle, while Nathan Patterson, who was due to make his Premier League debut, turned his ankle in training on Saturday.

Everton’s manager likewise cursed how Aaron Cresswell scored from a direct free-kick to give West Ham the lead while neither of Richarlison’s one-on-one chances went in at the London Stadium.

‘Nobody gets an easy game at Burnley,’ Lampard said of Everton’s next clash at Turf Moor on Wednesday.

‘(We must) continue with the application and character of our performance and keep working. Because when things are going against you — and they are, that’s not a whinge — the only way to do it is to keep doing the right things and working, and then they turn.

Van de Beek’s injury saw Mason Holgate — rather than Dele Alli — promoted to the starting line-up. Alli remained an unused substitute and Graeme Souness, in the Sky Sports studio, described Lampard overlooking the 25-year-old as a ‘proper punch on the nose’.

On why he chose Holgate, Lampard said: ‘We don’t have many defensive-minded players. Mason gave us that.’

Jarrod Bowen, on his first start since early March following a heel injury, scored the winner in the 58th minute. It was a timely reintroduction for West Ham, who face Lyon in the Europa League quarter-final first leg at home this week.

‘This was a big game for Everton, coming here, having to win,’ said Moyes. ‘Now we are all really looking forward to Thursday.’

On Cresswell’s free-kick, Moyes joked: ‘We were just trying to work out how many free-kicks he has taken since scoring one. I guessed about 625!’