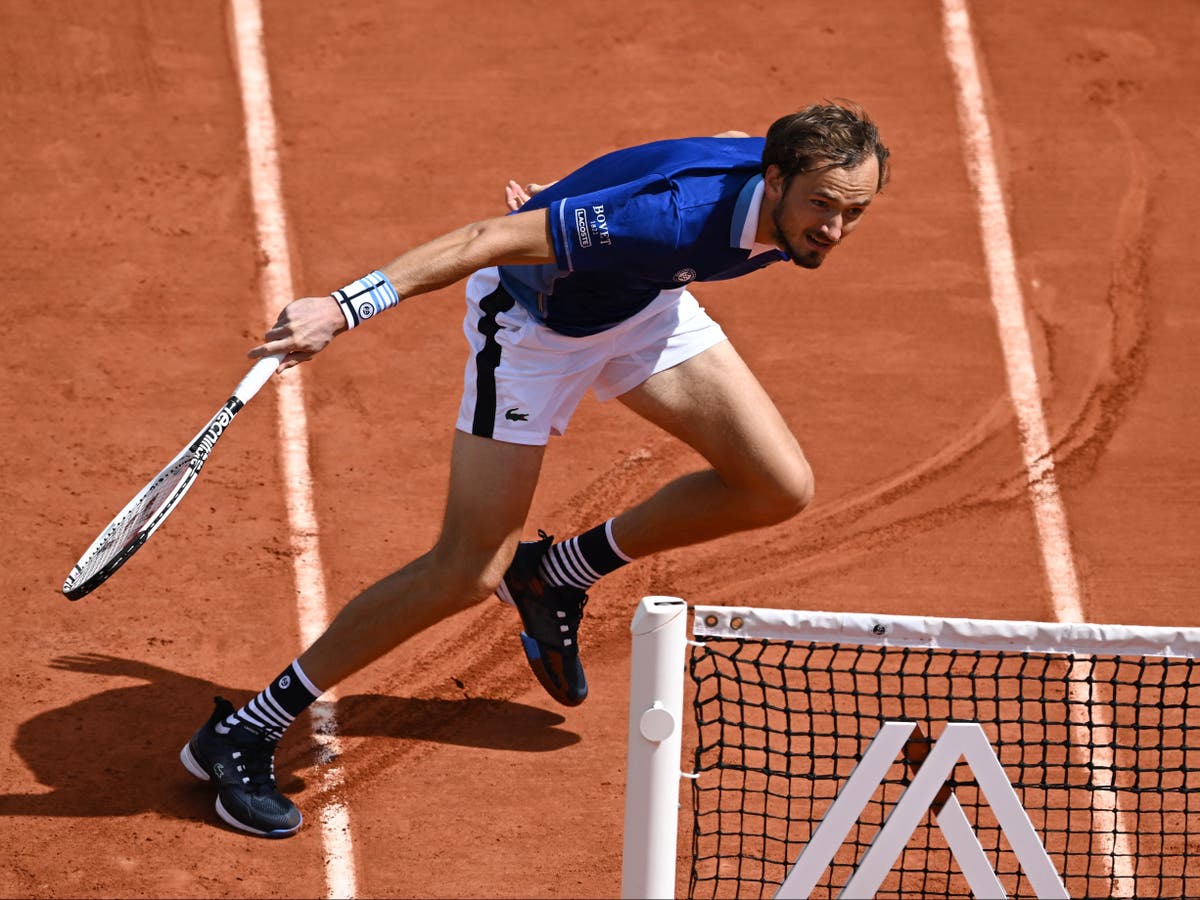 Follow live updates from the French Open as round one continues on the third day of play at Roland Garros. Daniil Medvedev has opened his campaign with a comfortable victory against Facundo Bagnis, who looked to be struggling with a calf injury. The US Open champion and Australian Open finalist has the chance to regain his spot at World No 1 if he advances further than Novak Djokovic in Paris, and now has his first victory since returning from hernia surgery.

Later on, last year’s French Open finalist Stefanos Tsitsipas should face a tougher first-round match against 20-year-old Italian Lorenzo Musetti, while Paula Badosa, Aryna Sabalenka and Simona Halep star on the women’s side of the draw. Home favourite Jo-Wilfried Tsonga will also look to upset the No 8 seed Casper Ruud on what is set to be his final appearance at the French Open. Follow all the action and scores from Roland Garros, below:

A simple day at the office in the end for Daniil Medvedev who cruised past Facundo Bagnis in straight sets 6-2, 6-2, 6-2 in the first round of the French Open.

Medvedev wins! He wins the first three points of his service game to set up three match points. Facundo Bagnis claims the next one but it’s not enough to stop him from progressing.

It took him just one hour and 40 minutes to overcome Facundo Bagnis and the Russian is safely into the second round.

The US Open champion is forced on the back foot by Bagnis but he shimmies up and down the baseline to keep the ball in play. Bagnis goes for the winner with an attempted drop shot and knocks it wide of the line.

He looks up at the sky in disbelief after giving away another game. Medvedev is one game away from the second round.

After three double faults in his last service game Medvedev is intent to find the box during this one. A fine drop shot and a rocket backhand put Bagnis two points up but Medvedev responds with two aces before closing out the game.

There’s a fist pump from Medvedev as he manages to get over the line to immediately break Bagnis in the next game. The crowd have started to pull out umbrellas as the rain begins to start.

For now though the match goes on.

Against the run of play but Facundo Bagnis breaks Daniil Medvedev in the fourth game and the third set is back on serve. Can he hold now to put some pressure on the world no. 2?

For all the talk over Bagnis’ injury he still seems intent to compete to best ability his body will allow. Medvedev serves up a double fault to give Bagnis two break points.

The next point goes to the Russian and a bouncy second serve to the Argentine’s backhand sees his return loop out of play and Medvedev brings the scores level.

Nice hold from Bagnis who forces a couple of mistakes from Medvedev as the Russian pushes for a few winners and sends his shots long.

A serve out wide at 30-40 takes the pressure off Medvedev and he quickly moves to 2-0 up in the third set. His service games are very quick.

Bagnis fights back to 40-40 but from this position Medvedev steps on the gas and works the Argentine around the court. Bagnis attempts to land a forehand push right on the line but overhits it and his opponent takes the first game of the third set.